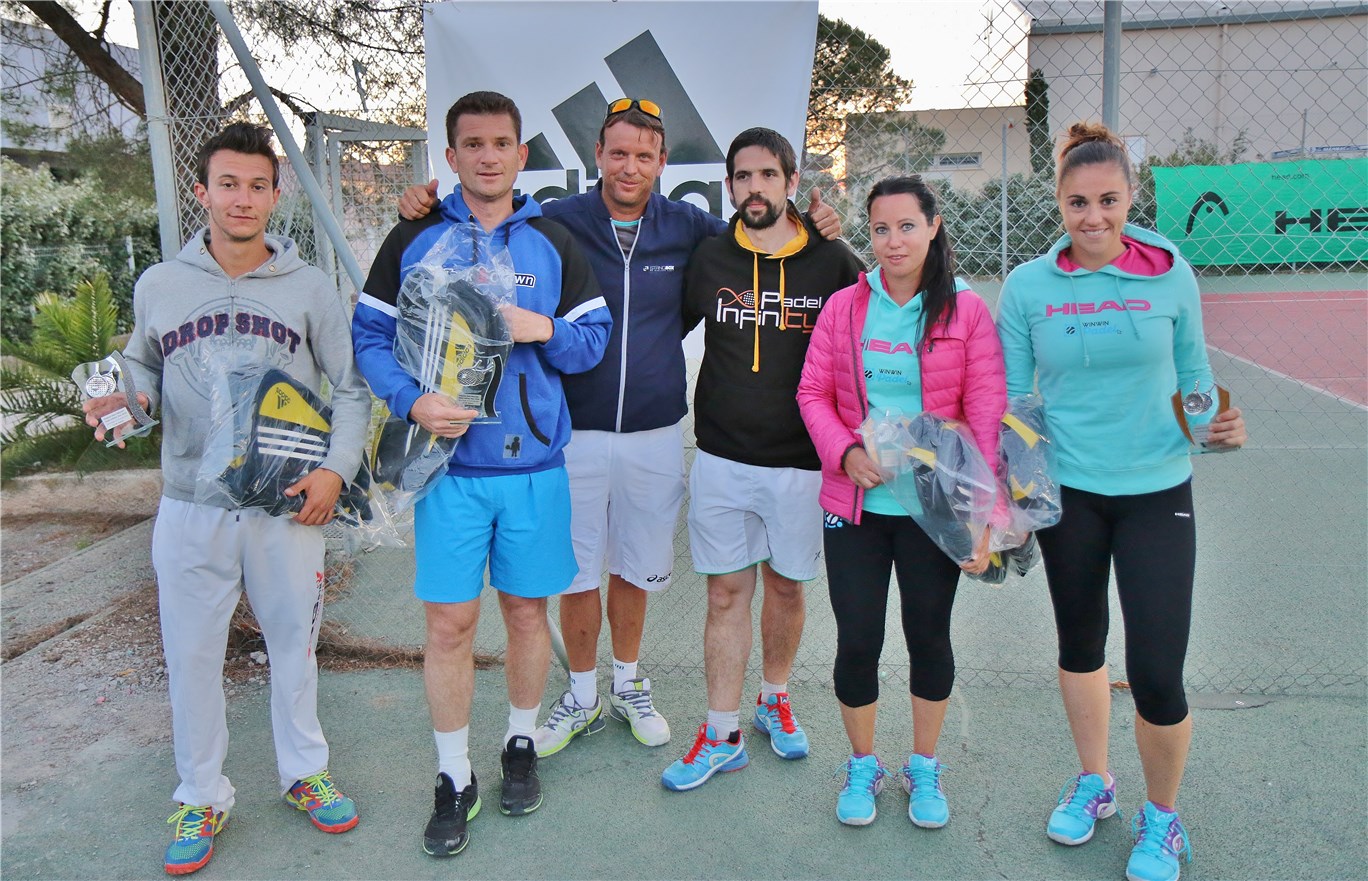 The brand new club of padel de Palavas offered this weekend the 9th stage of the Padel Infinity Tour, tournament this time approved by the French Tennis Federation (FFT) managed by Clément Arico and Nicolas Darnal, the manager of the padel Palavas club.

The pairs of Aix have shone at Palavas since they win at the ladies as at the men's tournament.

The champions of France were the most regular in this tournament and knew how to raise the level of play when necessary. In the final, they meet a pair they know particularly well: Sandy Godard and Geraldine Sorel. The 2 sets are hooked but at the money time, it is Laura and Audrey who pass (7/6 - 7/5)

Note the stalemate in the semifinal between Geraldine and Sandy at Line Meites and Deborah Alquier. Géraldine turns her foot at the beginning of the second set. We thought of a package, but finally the match ends well for the finalists of the tournament. In the final, Géraldine seemed not to be too embarrassed. But we will know more in the coming days.

Laurent Boulade and Pier Gauthier as boss in Palavas

Among men, the competition seemed particularly tough since there was in particular the Aixoise pair Laurent Boulade / Pier Gauthier, the famous Lyon pair Johan Bergeron and Pierre Etienne Morillon, and the 2 big pairs from Toulouse: the European champion Alexis Salles associated with Cédric Biegel and the pair Bastin Blanqué / Laurent Imbert.

If the tournament is going relatively well for the favorites, in the semifinals, Alexis Salles suffered a serious leg injury. Probably a tear. The pair forfeited as they led a set to 0 and found themselves in the 2nd set at 6 everywhere after missing match points against Blanqué / Imbert. For men, qualifying for the World Championships padel will take place in Switzerland in 2 months, hope it will be restored in time.

In the final, Boulade / Gauthier, the favorites of the tournament are found face Blanqué / Imbert. The match is strange. The two pairs do not necessarily make their best of the week. Absences from both sides.

The 1er set begins with a cannonball start from Boulade / Gauthier. 3 / 0 then 4 / 1 in the 1er set. It is expected to see a similar correction in the group match where the two pairs clashed and Imbert / Blanqué was severely punished by Boulade / Gauthier (9 / 0). But the machine is frayed on the side of the favorites while at Imbert / Blanqué, their match finally begins to return to 4 everywhere. It's too late.

In the second set, Laurent Imbert wakes up and the pair offers a very nice copy. Opposite, there are more mistakes. Blanqué / Imbert come back to a set everywhere.

In the super tie-break, despite a tight tie-break, Gauthier / Boulade won a new tournament after the Padel Master Lyonnais.


Against Deborah Alquier and Emmanuel Tecles, Laurent and Audrey were more solid to win the mixed tournament Padel Infinity despite a wind that is sometimes very complicated to manage.