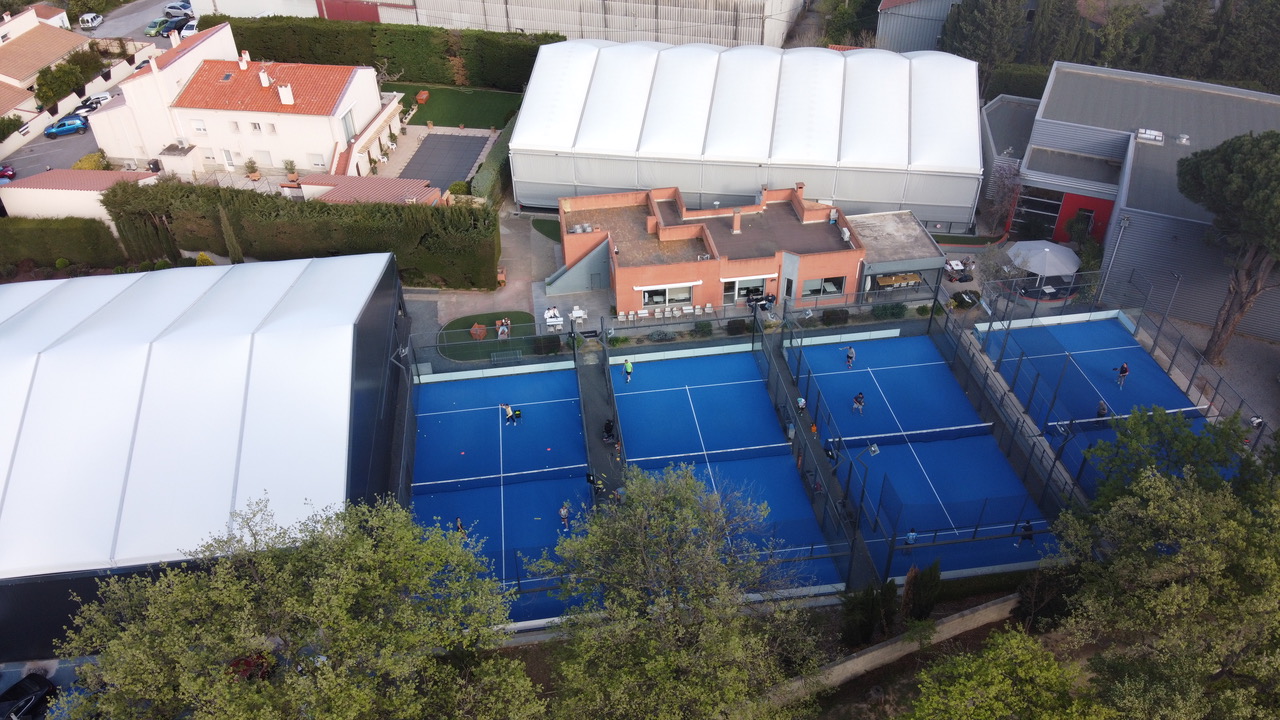 P2000, P500 juniors, FIP Gold… the Club du Mas in Perpignan is at the heart of the news. The opportunity to meet Alain Henry.

Padel Magazine : Alain, tell us a bit about the history of the club?

Alain Henry: This is the story of a private family club of 4 tennis courts created by my parents in the 80s. It was the tennis years, the number of players kept increasing and the structures were lacking, a bit like for the padel today.

Over the years, the club has grown and taken important turns, such as in 2005 with the creation of 5 squash courts. Then in 2012, we built the first track of padel, very quickly joined by 2 others the following year. In 2015, three new tracks take the place of a tennis court to meet the ever-increasing demand; they were then covered in 2020. And finally this year we added 3 padel additional indoors by sacrificing the last 2 tennis courts.

Padel Magazine : This means that today you are 100% padel ?

Alain Henry: Yes that's right, tennis is over! From 4 tennis courts we went to 10 tracks of padel, including 6 indoors. Tennis has been our DNA for 40 years because with Frédéric Tap, we were above all passionate. We have all these years developed the club through teaching. We had up to 350 young people at the tennis school on 4 courts.

Today a page is turned and the club looks to the future, but without forgetting the path traveled and the happiness that tennis has given us.

Padel Magazine : During this transition from tennis to padel, were there any obstacles at the level of the players?

Alain Henry: Not really. With the 2 remaining tennis courts, there were no more competitions and almost no more team matches. This happened naturally and the few remaining tennis players switched to neighboring clubs. As for the tennis school, we have kept almost 80% of the young people, who today all play padel...

Padel Magazine : How and why did you start padel ?

Alain Henry: First for pleasure, then for passion. After having tried in Spain, we decided to put a track at the club for our personal pleasure… But in the end, everyone wanted to play there! It was therefore necessary to quickly propose other sites.

I personally made the 100% switch to teaching padel to expand the business and meet demand. the padel very quickly brought back conviviality within the club.

In 2014, I co-wrote with Cédric Carité the first book on padel to provide a tool for teaching and understanding the game, because in these areas, in France, everything had to be built.

"Finding the right balance between competition and leisure"

Padel Magazine : Precisely, how do you see the future of padel in France and in the world?

Alain Henry: To make a comparison, I believe that the padel is currently at the level of tennis in the 70s/80s.

For 10 years we have been actors and also spectators of the evolution of the padel. In 2012, we were ten clubs and a hundred players in France. Padel Magazine, it was you (Franck Binisti) and your camera, and today, look at the course! For us it was the same, one track, then 3, and now 10.

For a sport to develop, it needs visibility, facilities, quality education and young people. On each point the padel progressing quickly and even faster than expected.

But what should guide the choices is the game itself and the pleasure it gives people.

The important thing is to know how to find the right balance between competition and leisure, to have quality teacher training with a strong identity, a policy of development and structuring of young people, a real partnership of trust between FFT and private clubs. . We also need a coherent geographical policy of quality of facilities, and not of quantity as we have done in tennis. And finally a clear and real identification of the number of practitioners with and without license.

Like all sports, the top level and the elite must remain the showcase which must make you want to enter the store, but it is also and above all necessary that the interior of this store be quite attractive and make you want to come back. We need clubs with an adapted welcome so that the player who comes three or four times a week is valued and that we can meet his expectations: find new partners, create games, self-evaluate... padel, it is above all meetings, conviviality, sharing, integrated into club life, both on and off the field.

“Creating tracks is not that difficult, bringing them to life is a real job”

Padel Magazine : What is the Mas club's program for the next few years?

Alain Henry: The program has always remained the same for 40 years: to animate, introduce, train and teach this wonderful sport. Yes, we have enlarged and modernized the club, and the small family tennis club has become a more imposing complex, but the spirit remains the same.

We are committed to keeping this club spirit inherited from tennis and strong from our long experience, while relying on people who have grown up in the club to continue to move forward.

Creating leads is not that difficult, bringing them to life is a real job. This beautiful tool must be put at the service of the padel.

We have to work just as well with the FFT for events, as know how to animate the ascent-descent on Friday evening; both train the best French players (4 members of the French teams at the club) and give their first lesson in padel to a new initiate.

As we have always done, we will try to continue to innovate, to offer, in any case to always be creators rather than followers.

Padel Magazine : Now let’s talk about the international competitions that you set up…

Alain Henry: I would like to give moreur important meetings for enthusiasts of padel.

Then there will be 2 other important meetings on Catalan soil.

Since last year, we have launched with a team of enthusiasts, of which you are a part, the association ADN PADEL which aims to organize and promote the padel through events, including international competitions under the aegis of the International Federation of Padel (FIP) and the FFT.

The first took place last August in Canet-en-Roussillon on the beach and was a real success.

This year we are renewing the adventure on one of the most beautiful squares in Perpignan, for a GOLD FIP from June 22 to 26. In August, it will again be the FIP RISE in Canet from August 24 to 28.

It's an extraordinary human adventure with a team of passionate volunteers where everyone's skills are highlighted. We will try to progress step by step to maybe, who knows, organize an even bigger event to promote and develop the padel.