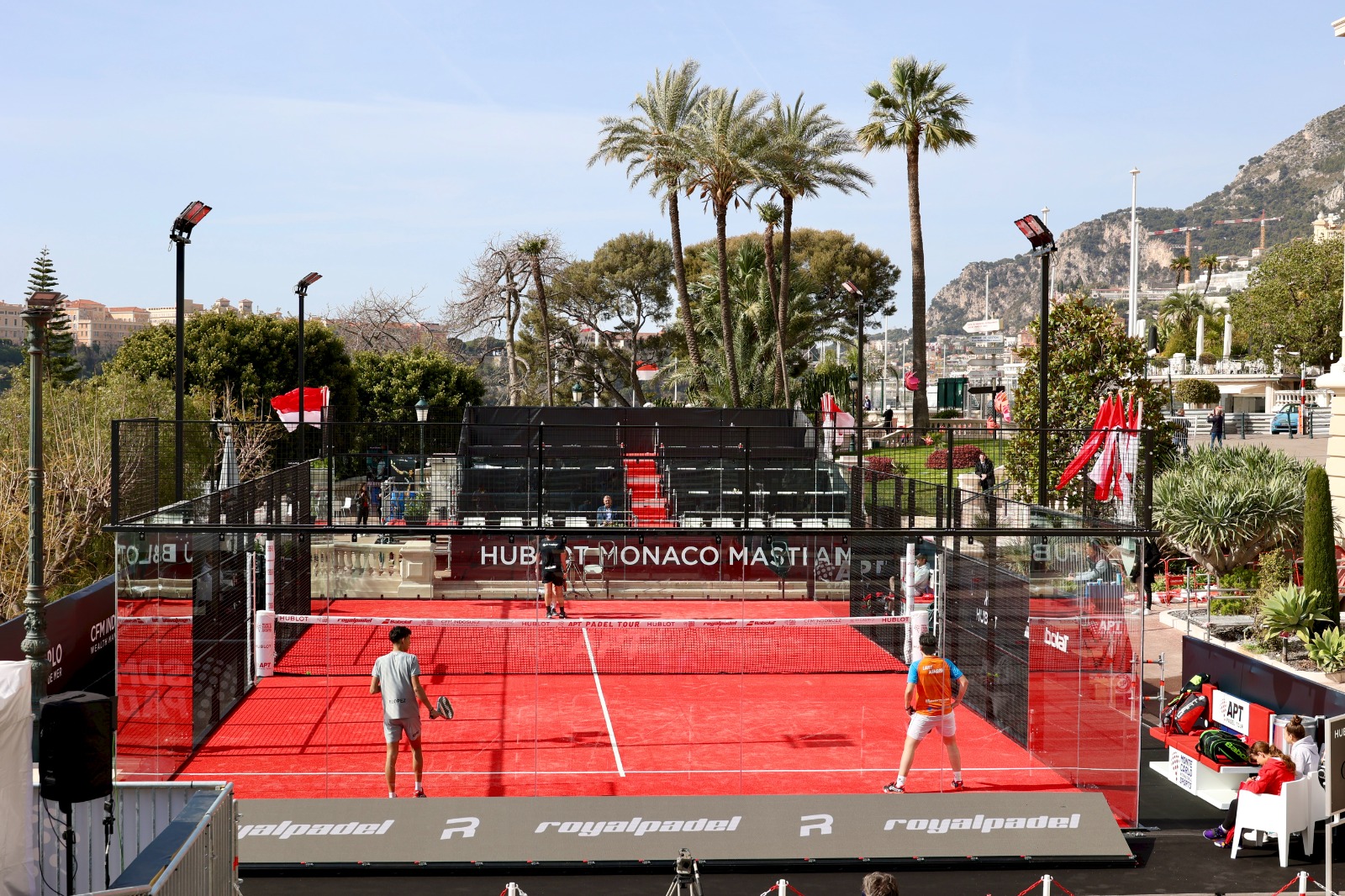 Following this APT Hublot Monaco Master, with on the program today all the quarter-finals to follow on Padel Magazine.

We were promised a titanic match, we got it. Well almost. The Windahl/Gutierrez pair, which appeared for the first time on the APT, faced the leaders of the Maxi Arce/Franco Dal Bianco ranking. In a very, very high level match, it was ultimately the Swede and the Argentine who got the better of their opponents.

Superb performance from the Barrera/Britos pair which confirms its excellent form at the moment by winning in 2 sets against the pair Julianoti / Quiles. A prestigious victory, which, moreover, allows them to reach the final square of this APT Hublot Monaco Master.

The 1/4 finals are over and we now know all the teams qualified for the final round of this APT Hublot Monaco Master. Match results:

Victory for the Chiostri/Alfonso pair, and with style! If we mentioned the sulphurous character of the Germani / Torre pair during their victorious quarter-final against Restivo / Ramos, the Chiostri / Alfonso pair was rather noticed by their dead calm and their unfailing composure. Opposite, the Brazilian duo Da Cunha / Flores seemed overwhelmed today and did not find solutions against the Argentinians.

After a close match, the Germani/Torre pair got out of a possible trap against the Restivo/Ramos pair. They qualify for the semi-finals of this APT Hublot Monaco Master. Final score: Victory Germani/Torre 3-6 6-3 7-6

See the summary of the meeting in the article below:

Find the link to follow live the meetings of the men's table, right here:

After the girls at the opening, it will be the turn of the men's draw to enter the arena. The matches take place on the center court from 12 p.m.

After a fairly intense Round of 8, it's time for the Women's quarter-finals which will take place this morning and at the start of the afternoon. Here are the posters to follow:

The matches can be watched live right here:

At the end of an improvised night session, the Andres Britos/Pablo Barreda pair won in 3 sets in a very tight match full of twists and turns against Alex Chozas/Tolito Aguirre. From the first set we could feel that we would be entitled to a superb fight which was not going to last an hour. And it didn't miss. It took 3h14 of play for this match to find its winners in this match. And the winners are Britos and Barreda who win 6-7 7-6 7-5

At the end of the 3 sets, it was Arce / Dal Bianco who showed what wood they were warming up! The first set was such a formality for Arce and Dal Bianco, that we could say to ourselves that finally this shock of the day was going to be “pschit”. However, Cayetano and Jose Carlos had not given up and surprised the number 1 of the APT in the money-time of the 2nd set. Stung, the Argentinians were simply intractable in the 3rd and pocketed their ticket for the quarterfinals of this APT Hublot Monaco Master.

They will face in the next round the pair Daniel Windahl / Cristian Gutierrez in a match that already smells of powder!

A one-sided match for the Brazilian-Argentinian pair, which held the lead throughout the match. Julianoti and Quiles were simply too strong for their opponents today to be put in danger. Victory on the score of 6-1 6-2 against the Javier Pérez/Simon Vasquez pair. They will face the winners of the meeting between Andres Britos/Pablo Barrera vs Alex Chozas/Leonel Aguirre.

In a match that looked in their favor on paper, Gonzalo Alfonso and Federico Chiostri battled in three sets against the Swedish pair of Viktor Stjern and Daniel Appelgren, to finally claim victory. They won the match with a score of 6-3 3-6 6-3. They qualify for the round of 8 of this APT Hublot Monaco Master, and will face the Brazilians Lucas Da Cunha/Joao Pedro Flores in the quarter-finals.

The live of these matches scheduled on the Central can be followed here:

Mini earthquake on the Central! In a match announced as a tight opposition that would surely end in the best of 3 sets, the new Germani/Torre pair proved to everyone that they will certainly have to be counted on. If in the first set we were treated to a high-flying fight, which ended in a tie-break, in the second there is simply no match and the Argentinian pair were impartial by not conceding any game. Final score: Victory 7-6 6-0 Germani/Torre

The Swedish-Argentinian pair won in 2 sets against Del Moral/Egea having delivered an almost perfect score. With a 6-1 6-3 victory, the pair qualified for the quarter-finals of this APT Hublot Monaco Master.

11:36 The second set between Windahl / Gutierrez vs Del Moral / Egea to follow live

11:10 am: The first qualified for the quarters

On the central, the Brazilian pair Lucas Silveira Da Cunha/Joao Pedro Flores won against Antonio Luque and Vasco Pascoal with a score of 6-3 7-6.

At the club, Diego Ramos and Juan Restivo gave us a real recital in a very pleasant match, winning in 2 sets against Miguel Deus and Nuno Deus. Final score: Victory Restivo / Ramos 7-5 6-1

Very good performance from our blue Charlotte Soubrié and Elodie Invernon who qualified for the round of 6 of this APT Hublot Monaco Master, and officially entered the final table! Victory on the score of 2-6 4-XNUMX against the pair Pando / Mazo.

The 8th finals are on!

All LIVE links can be found in the article below!

We will find this morning:

After a big fight, our Blues lost to the Swedish n°1. Led 1 set to 0, the tricolors picked up a round everywhere, before finally losing after a big battle in the 3rd set. Final result: victory of the pair Akerberg / Girdo 6-2 2-6 6-4

The Chozas / Aguirre duo had no time to lose in this closing match of the day on Wednesday at the center. Dry victory in 2 sets, with only 3 small games conceded against the Spanish pair Florensa / Quiros. Final score: Victory for Chozas/Aguirre 6-1 6-2

19:15 p.m .: To follow the match of Wendy Barsotti and Melissa Martin against the Swedish N°1 live

In this duel between Spaniards and Argentines, it is finally the Spanish pair composed of Rocafort and Gaspar who made the law reign on the ground. Victorious in a very tight first set with a score of 7-5, the Spaniards did not miss anything in the second. Victory in 2 sets for Rocafort / Gaspar on the score of 7-5 6-2

The match between Cayetano Rocafort/Jose Carlos Gaspar and Juan Pablo Dip Nazar/Matias Gonzalez is about to start.

In a match with a scenario worthy of a Hollywood film, the Pérez/Vasquez pair won a bitter fight against the Ferreyra-Arganaras duo. Victory in 3 sets for the Swedish-Spanish pair: 2-6 6-3 7-6

More incisive, and taking more initiatives, the Pérez/Vasquez pair seized the 2nd set with authority with a score of 6-3. We will therefore be entitled to a decisive 3rd set in this match.

Without forcing, the Argentine pair got the better of the opponents in this first set. They won the first round with a score of 6-2.

15:04 p.m .: The Spanish-Swedish pair enter the track against the Argentines

The matches resume in this APT Hublot Monaco Master! The first game of the afternoon will pit Javier Pérez and Simon Vasquez against Relys Ferreyra and Juan Argañaras. The match takes place on the central court and to follow live directly here:

Without having to dip into their resources, Julianoti and Quiles took the meeting on their own from the start. Very solid, they won in 2 sets: 6-1 6-3, against Bejarano/Puppo.

Windahl and Gutiérrez win against Maxi Sanchez and Cristian Gutierrez, with a score of 6-2 6-2. The Swede and the Argentinian therefore slip into the round of 8.

With an iron fist, the Del Moral/Egea duo perfectly controlled the tempo of the match to win in 2 sets: 6-2 6-2. The Argentines therefore qualify for the 8th of the round of XNUMX.

The Argentine pair starts with a bang on the central. Despite conditions similar to yesterday morning (a lot of wind), she won the first set without shaking with the score of 6-2.

The kick-off of the day will be launched by Matias del Moral (23rd in the APT) and Pablo Egea (18th in the APT) who will face Ricardo martins (39e) and Pedro Araujo (56th). The Argentinian duo, who are given the favourite, will still have to be wary of the 100% Portuguese pair who hope to have their say in this match.

Today we will find: