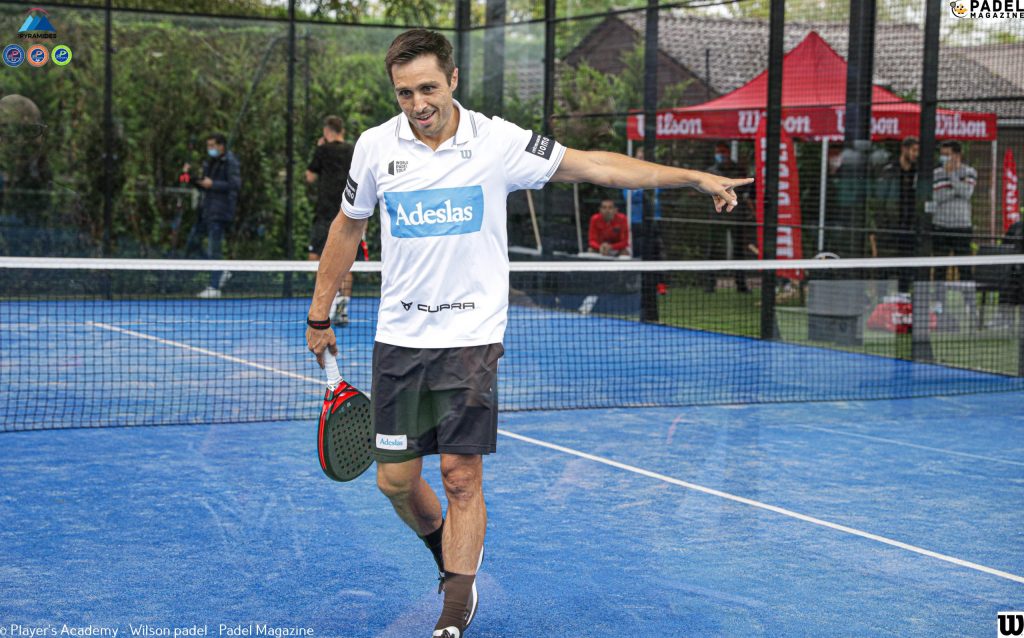 Fernando Belasteguin, offers us an exceptional interview where he returns to thetactical evolution professional padel, its own changes, its opinions on the different quarrels, but also his future.

Despite his victories and records, his motivation is greater than ever.

Ambitious, generous and informative, second part of the interview of the legend led with a master hand by Lorenzo Lecci López.

To read the first part of the interview, it is by HERE.

Lorenzo Lecci López: We're going to talk a bit about tactics. We regularly see you changing sides on the court, which side do you feel most comfortable on today?

Fernando Belasteguin: “In Buenos Aires, I hurt my Achilles tendon. After the rehabilitation, I then say to Tapia “you are young, you cover more ground, you play on the left, so I will play on the right”. We played like this for the 7-8 tournaments last season.

This year we had to continue with this system to relieve my tendon, but during the confinement, I worked tirelessly, and I was able to recover very efficiently. I felt comfortable playing on the left again, and asked him to change. He accepted, and since then we have had very good results. I feel like I can play on the backhand side again, as I have done throughout my career."

Lorenzo Lecci López: The fact of changing sides during a match is also a tactical alternative to surprise the opponent a little?

Fernando Belasteguin: “Yes of course, but as we do regularly, the surprise phenomenon can no longer be so effective.”

The evolution of world padel

Lorenzo Lecci López: The players are more and more powerful, the game always faster. The players do not move back and advance on all the balls. Is this the main evolution of professional padel?

Fernando Belasteguin: “Yes, but I think this is due to the change of ball. The balls are always faster. We must then develop our game with the conditions. So you have to take more risks. ”

Lorenzo Lecci López: Is it more of an advantage for you, or on the contrary a disadvantage?

Fernando Belasteguin: “I don't think about that. I am focused on training well to adapt to this game. If I refuse to adapt, there is a way out and goodbye. But I want to continue to adapt! ”

“France, a benchmark in the growth of the world padel”

Lorenzo Lecci López: When we see clubs like the Pyramids, we can be optimistic about the development of padel in France. What do you think ?

Fernando Belasteguin: “We are facing the sport that will develop the most in the next 10 years, all over the world. France will be a benchmark in the growth of world padel. I hope there will soon be a French player in the top 10. ”

“Leave the bickering and work together”

Lorenzo Lecci López: We remember an interview in Rome, in which you denounced the conflicts between the entities that run the padel. More than ten years later, the conflicts are still there. What is the solution to this situation?

Fernando Belasteguin: "If these people want to work to make padel grow, we must put the egos aside, all sit at the same table. Let no one seek to be the one to be applauded, let egos be put aside, and let all pull together in the same direction.

As you were just saying, even with the disaster that there is when they bicker, the padel continues to grow. Imagine if all these people got together. They are all people capable of working to develop padel, but they bicker by going their own way, and they do not agree.

It would be amazing if they would come together, and if we could all work in the same direction. We can do great things. I hope that moment will come in a very short time. ”

Lorenzo Lecci López: The APT Tour is growing in Latin America and will arrive in Europe next season with large economic prizes. Could we see you on one of the stages of this circuit?

Fernando Belasteguin: “I am under contract with the World Padel Tour until 2023. I can't tell you about a circuit I don't play on. The more circuits there are, the more choices players have. But it would be much more interesting for the sport itself, for there to be coordination between all these circuits.

“The best moment of my career has not yet arrived”

Lorenzo Lecci López: After you have won everything, what is the goal that allows you to continue training every day?

Fernando Belasteguin: “I think the best moment of my career has yet to come.

I train with this mentality every day. In my career I have been fortunate to have the three greatest sensations that an athlete can know. That of losing, because I lost a lot of matches. That of winning and being world No. 1: this feeling few can have it and it's very pleasant.

And the third, the one that punctuates my daily life, is train every day like it's the last of my professional career. I can assure you that it is this third sensation that has given me the most pleasure throughout my career. ”

Lorenzo Lecci López: Fernando, you came 10 years ago, you are here today, so we will see you again in 2030, or we will have the chance to see you here sooner?

Fernando Belasteguin: "I will come back if needed in 10 years, I don't think so as a professional player, but you will always see me in the world of padel. I hope that when we speak 10 years from now, padel and the Wilson Bela brand have not stopped growing. I hope that in 10 years padel will be the benchmark sport around the world. ”

Lorenzo Lecci López: Fernando, it was a pleasure. We hope you can win for many more years.

Fernando Belasteguin: “Thank you very much, I hope to see you again soon. And I hope next time I get access to Wilson Bela t-shirts before you do! I still don't have it! But I hope you can enjoy it. ”