Mind Padel, the Lyon club left its mark on “spirits” by offering a very fine first edition of the Open Esprit Padel by Flexpert. The ladies, gentlemen and mixed tournament in the P1000 category saw the victory of the Pujals / Collombon pair for the ladies, Bergeron / Blanqué for the men and Miotto / Sorel for the mixed.

Back on a crazy weekend.

Sara Pujals, the Spanish and Alix Collombon, the reigning French champion padel were far too strong in this tournament ladies. Above in all the compartments of the game, they have not really been worried in this tournament, even if ...

In the final, against the other French-Spanish pair of the tournament, Kristina Clément and her luxury partner Gemma Triay, one of the best players in the world, it took for Collombon / Pujals to abandon a set en route to go to end of the competition.

Yes, the cause of this second set is mainly due to a relaxation of the pair Collombon / Pujals, but we can congratulate the warrior Kristina Clement who has worked hard in this tournament alongside the champion Gemma Triay.

We have also seen the huge progress of our French Alix Collombon who really surprised by his level of play on this tournament. Line Meites, has several times reported:

It's going to be very difficult to get Alix Collombon and Jessica Ginier at the French padel championships next September at the Toulouse Padel Club.

For Collombon / Pujals, after a win in France, the Franco-Spanish pair left for Barcelona to try to have as much success on the professional circuit.

A final that will not remain in the annals for the level of play ... The two pairs have not delivered their best padel.

While we were waiting for a Parisian pair to start faster than the Southerners due to some health concerns on the side of Bastien Blanqué, we had the right to the exact opposite: A blowing start Blanqué / Bergeron, while the pair Maigret / Tison had certainly forgotten to go first in the beginning of the match.

The Bergeron / Blanqué pair arrived with full confidence after very good results at the Lisbon Challenger. Both players were certainly more aggressive than usual which surprised the pair Tison / Maigret.

1er qualifying round for Bergeron / Blanqué! A first for France!

But we will not lie, the two Paris players have committed too many mistakes, too imprecise to hope to reverse things in this first set lost 6 / 1.

In the second set, we take the same players and we reverse the roles. Surprisingly enough, while Madrid control the game in breakant entry into the 2e set, Bastien Blanqué and Johan Bergeron perform a catastrophic service game thus reviving the dynamics of this game.

It will not be necessary to say twice to the Parisians to rush into the gap and propose a level of play more in adequacy with their standing. The smash machine of Adrien Maigret and Benjamin Tison is set up ... But at the same time, it is the game of the Southerners who are writhing ... While Blanqué / Bergeron had the match between their hand, she loses the thread of her game thus losing the second set 6 / 2.

Another 3e set after the magnificent finale of the My Padel Tour at Tennis Padel Soleil.

The level of play is balanced and we finally have a match worthy of the protagonists on the track. The exchanges are lengthening, the faults are becoming rarer. But it's finally Bastien Blanqué and Johan Bergeron who will win 6 / 4 in this decisive set on a game back missed the Parisians, and a Benjamin Tison who will end the game by limping ... But fortunately more fear than harm.

A match to forget for the Parisians, but also and especially a first win for Bergeron / Blanqué against Maigret / Tison.

Miotto / Sorel on the wire!

The David Miotto / Géraldine Sorel pair wins the mixed padel tournament with Esprit Padel against Justin Lopes and Emilie Guisier. A final that could have turned on the other side when we know that the match ended on a super tie-break won 10 / 0 by Sorel / Miotto. 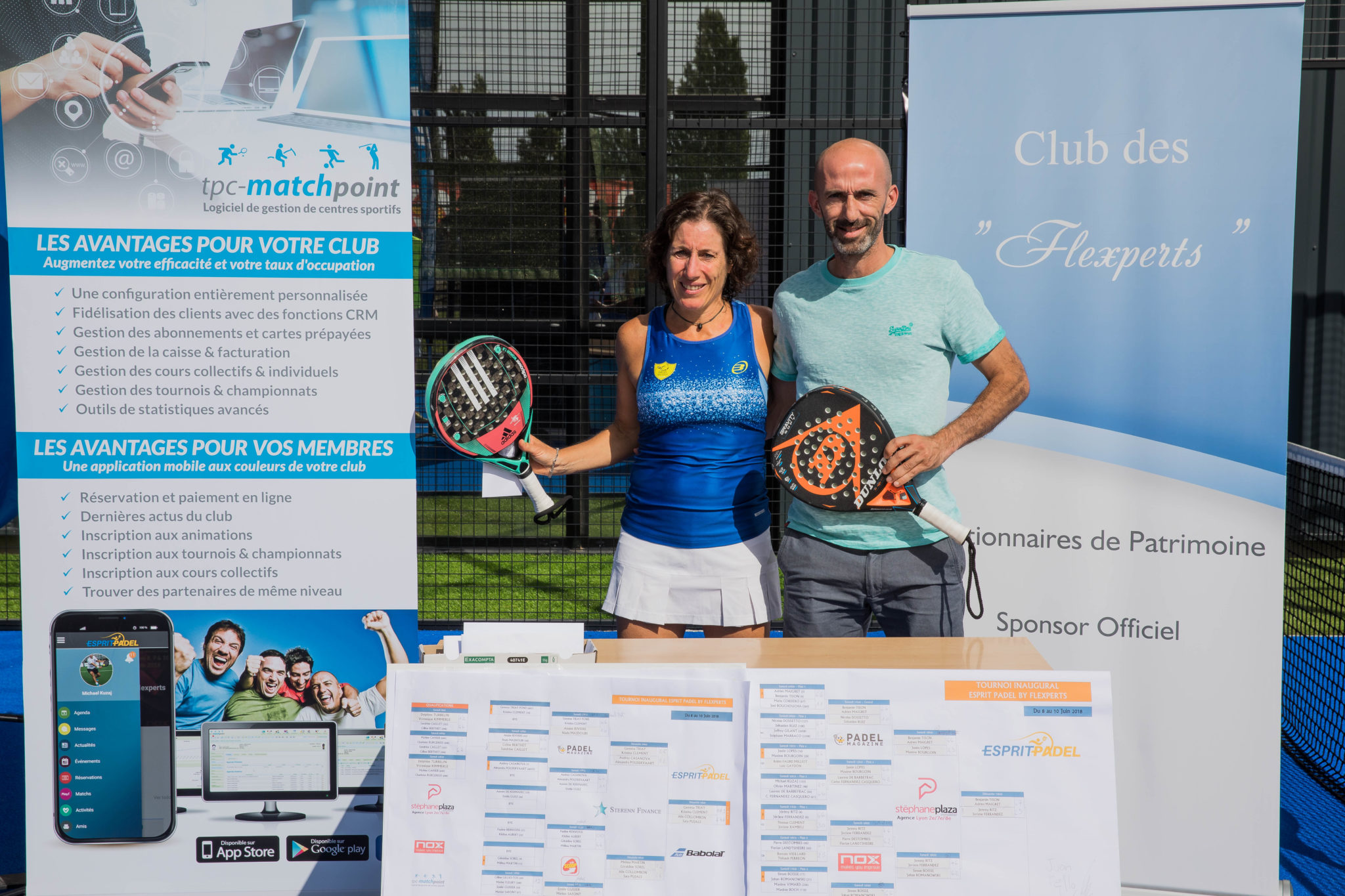 An exhibition with beautiful champions

Esprit Padel also offered for the opening a nice match: Tello / Blanqué vs. Triay / Chingotto. Victory of the mixed pair in 3 sets. Thank you to them for these good times.

The organization was perfectly mastered by the chief referee, Jérôme Bécasset, the Esprit Padel team with Sébastien Cornet and the magnificent commentator and godmother of the event: Alizé Cornet.