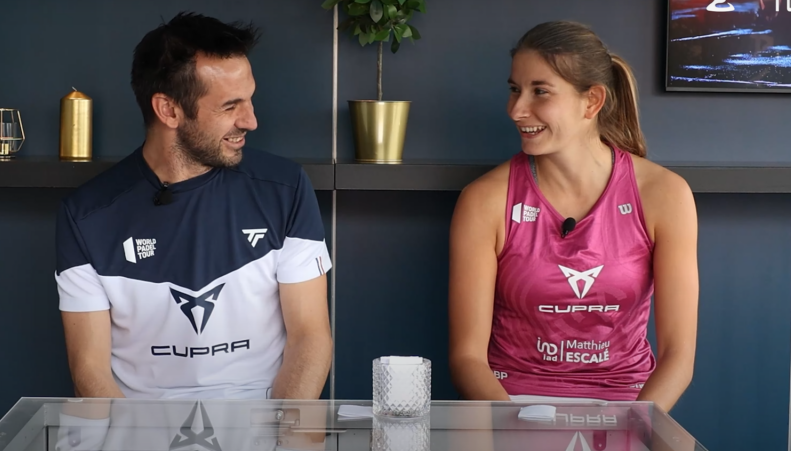 The best French player who questions the best French player and vice versa, you had imagined it? Well it's done now. Made at Casa Padel this weekend during the first stage of the Cupra Padel-Point Tour, this cross interview allows us to know more about the little secrets of our two champions.

Alix Collombon: “Do you remember your first victory? »

Ben Tison : “My first victory, I think I beat the famous journalist Franck Binisti at Bois d'Arcy. I won't say the score because the poor thing I like him anyway (laughs). »

Benjamin Tison: “An anecdote from your playing career”

Alix Collombon : “I have a pretty good one: my first year, first World Padel Tour in Barcelona I didn't speak Spanish yet and the coach gave us the match brief before the first qualifying round. Obviously I don't understand anything, I ask my partner “Well what did he say? » and so there she says to me « we have to do that.. the lobs etc. ». And there you have our opponent coming out of the toilet, she had heard everything. We took a spanking in the first set but after we ended up winning the match anyway ».

Alix Collombon: “Do you have a particular routine before a match? »

Ben Tison : “I like to put myself aside a bit. Be quiet alone and imagine how the game will unfold. Then now that I have made a lot of effort on physical preparation, I like my little warm-up routine (joints, muscles). And after really concentrating mentally, nothing crazy crazy, nothing extraordinary. »

Ben Tison: “How do you choose your playing partner? »

Alix Collombon : “Obviously I rely on his qualities. Our games have to match. It also has to be someone I like, because if it's someone I can't see (laughs), it might be a bit complicated. But here, I try to take several criteria, but it is the game that takes precedence above all. »

Ben Tison : “I have to admit that I find it difficult to play with someone I don't like. And when I chose to play with a Spaniard, the number one point was that I got on well with him. I was very lucky with Teo, he is a very nice guy. He's a different guy from the average player, he's a good guy who likes to enjoy good things, like me. We found each other well, he's even crazier than Jérémy Scatena! »

Alix Collombon: "What is your game signature at the padel ? "

Ben Tison : “My signature game, I'm hesitating between two: either the smash grid, because I think I've had it since day one, and my two-handed backhand that everyone misses. »

Ben Tison: “When do you think the padel at the Olympics? »

Alix Collombon : “I want to be objective, I want it to be as quickly as possible. It is a dream for all of us. Now there are several criteria to be met for a sport to enter the Olympics. See how the padel lately, I have high hopes that in 8 years it will be done. »

Ben Tison: “What is your favorite move? »

Alix Collombon : "It's not an impressive shot, but it's my bandeja in the center which allows my partner to enter and finish the point. It's a shot that I like because I feel it as an assist. »