Interesting question since unlike tennis, the corridors do not exist. Leave in your bag your aces, your winning returns, your points in 2 snowshoes. We will have to be patient and wait for the right moment to go on the offensive.

Unlike tennis, attacking the baseline is rather rare. The opponents will be at that moment most often stuck to the net. Tactically, the option of the lob is the hit that will play in the majority of cases.

Because if there is one area that must absolutely occupy to attack your opponents is the net.

« The pair that holds the net holds its destiny in hand ". This area will allow you to make a winning point or blame.

Your goal will be to take the net as soon as the situation allows.

Warning: Remember to go up to two and if possible on the same line.

Cut stubs and smashes will be your main weapons to complete a point.

But again, the padel is different from tennis in that it will usually take several attacks to complete a point.

Before the final blow, it will therefore go through a phase of destabilization of your opponents.

First, the volleyed ends will aim to hinder opponents with a low rebound. By tapping the glass, the ball will then sting to the ground. There is the effect given to the ball, but we must also find the areas to play. 2 areas can be searched:

There are several types of offensive strikes: The vibora (a side effect), a strip (A smash tray) or the smash. At each situation his shot. However, you will have to focus on the main shot: the Bandeja. It is a cut smash whose objective is to push back the opponents at the bottom and to prepare the point.

The smash is the ultimate shot. He must be a winner. Bringing the ball out of the field is the ideal option. But beware, If the ball remains in the field, your opponents can take the opportunity to return your shot against you. If you are more than 3 meters from the net, the tape will certainly be the most adequate option. 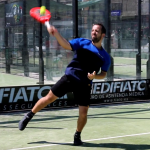 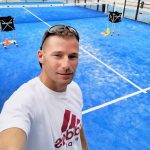 3 comments on “How to win a point at the padel?"