[box type = ”info”] Pierre Lamouré, the “French” exiled in Spain, founder of Upadel.net, professor and technical manager of the Vals Axarquia padel club in Torre del Mar, manages the padel “technical and tactical” column. Regularly find articles and videos on how to play padel thanks to Pierre Lamouré. [/ Box]

Moving to 2 at the padel is not nearly as easy as that. Let's try some elements that will help you play better with your partner.

Padel playing with two, it is essential to synchronize his movements. The two teammates must be separated from 3 or 4 m, whatever the game situation proposed.

As you all know, we avoid one being on the fly and the other on the back of the court not to create a gap in the diagonal.

But it is also recommended to ensure lateral movement common to both players, which avoids areas of fragility. Moving one of them to one side will force the other to move in the same direction while trying to keep a roughly constant distance.

For his situations of moving in pairs, you can imagine that an invisible rope brings you together thus ensuring a cohesion of whole

Let's see this video and all your snowshoes !! 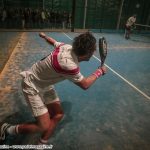 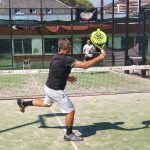 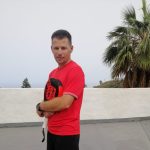