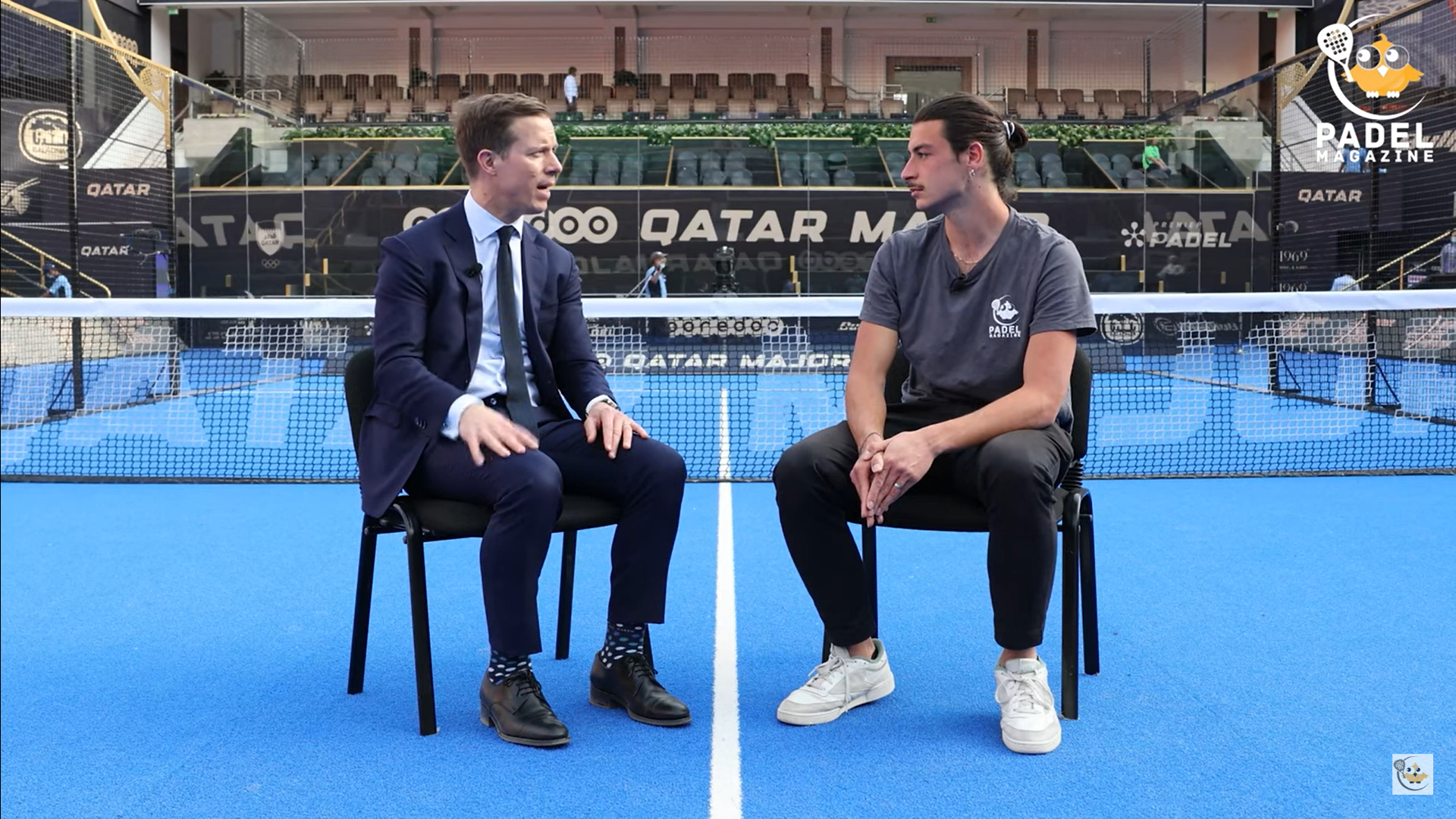 The EVP of Corporate Affairs & Senior Legal Counsel Premier Padel, David Sugden, granted us an exceptional interview during the Premier Padel Qatar Major which took place last week. Happy to tell us about the evolution of the project Premier Padel, he didn't hesitate to tease us with a very big surprise which turned out to be the announcement of the tournament at Roland-Garros.

“We made sure we had the best team possible”

Padel Magazine : As Communications Director of Premier Padel, in a few words, can you describe us precisely Premier Padel ?

David Suggen: " It's incredible ! What we created in two months: the place where we are, the brand, the name, the value, the energy and the details. From the top of the courts you can see the 5 stars of the logo " Premier Padel », we can see the best players in the world here for the first Major and we have to say that we did all that in less than two months, it's really fantastic! »

Padel Magazine : You did all this in two months, so I wonder how the last two months have been? And how did you build your team in such a short time?

David Suggen : “I haven't slept much (laughs) since the start of the year. We built the team as we went, but we made sure to have the best people working in the best areas for us. That is to say that we try to have: the best marketing agencies, the best law firms, the best event management firms, the best intermediaries with the players, the best management possible, etc... we want to be able to design the best possible team that will help us have the best circuit (all sports) in the years to come. Look at what we've done in two months, imagine what we can do in two years. Take for example the broadcast deals we have secured over the past two months: Sky, Espn, Viaplay, Free-to-air in Spain; the sponsors we brought back...

And all that is in line with President Nasser Al Khelaifi's vision of things and that's how he manages his sports business. You can see what he has achieved with PSG and in other sports, that's what we want to apply with Premier Padel. "

Padel Magazine : You are in the process of building a “Dream Team” within the organization of Premier Padel, I wanted to know the importance of all these diffusers you got. How important was it for you to accumulate broadcasters like Bein Sports, Sky Sports, ESPN etc.?

David Suggen : “Broadcast is very important for two reasons: the first is exposure, which is the number of people who will watch and engage with the sport and the second is revenue, investment because you are paying these broadcasters and you want a return on that investment. And it's the right mix to have, we have “free-to-air” broadcasters like what we have set up in Spain, to have the maximum number of people watching. And you have the paid broadcasters, like Sky, ESPN and you pay for the rights and those rights go straight into the sport. The ideal is to have a mix of the two, and that's what we've been doing over the last few weeks: we wanted to have the biggest names among the broadcasters, and so every day I received by email "we have a new deal, "we have a deal". What we did in two months would normally take at least two years! »

Padel Magazine : We were able to understand in a interview with Luigi Carraro (the president of the FIP), that you have planned more or less 9 tournaments in the season. Why have you not yet communicated on these tournaments and in particular on the level of the dates?

David Suggen : “The calendar is coming, we have 4 grand slams which are ready and which will be announced very soon. We try to go as fast as we can and as you know we are currently focused on a tournament (the Premier Padel Doha). We must therefore prioritize our tasks, we organize this tournament in the best conditions first and then there will be a very big announcement tomorrow that is related to the country you are from. There will be more and more announcements in the coming weeks, we try to do what we can when we can, but we have to prioritize certain things. Don't worry, everything is ready and you will be thrilled with what is to come. »

Padel Magazine : So, are you going to give us a calendar or rather announcements date by date?

David Suggen : “We're going to make a schedule, but don't forget where we come from. When I think back 3 weeks ago, you didn't even know the brand Premier Padel. Now it is there, printed on the nets, on the palates, on the bleachers etc. Everything is ready but we prioritize what we announce when we announce it. »

“We put the players at the heart of the project, which is different from the situation they were in before”

Padel Magazine : We know that Bein Sports wanted to buy the rights to the WPT last year and in the end they decided not to. Is it because they knew Premier Padel would emerge?

David Suggen : " No not at all ! Bein Sports buys the best rights regardless of the sport: La Liga, the UEFA Champions League, the NBA... and the padel is THE sport to buy. For Ben, the padel is a very good product because it is a highly watched product in the Middle East and North Africa (24 countries). So it's a very big sport with a lot of viewership and Bein buys the best rights, that's their business."

Padel Magazine : In Spain, the padel is the second sport in terms of players. Do you think you can bring back the padel professional at this level? Football is hard to beat, but why not imagine the padel become the 2nd world sport.

David Suggen : " It is clearour ambition, it is even higher than that. But I'm going to repeat myself: look at what we've done in two months, imagine what we can do in two years. The announcements will start arriving tomorrow, and you will be able to say to yourself "Wow here we are, the padel is at its best."

Our ambition is to grow the sport everywhere, but the key in all of this is to put the players at the heart of the sport. They are in the think tanks and we consult them about the brands with which we associate, about the places where the tournaments take place and even about the broadcasters chosen.

They are totally involved in the project and will be essential in building the brand (Premier Padel) and this business. Which is different from the situation they were in before. »

To watch the interview, go here: