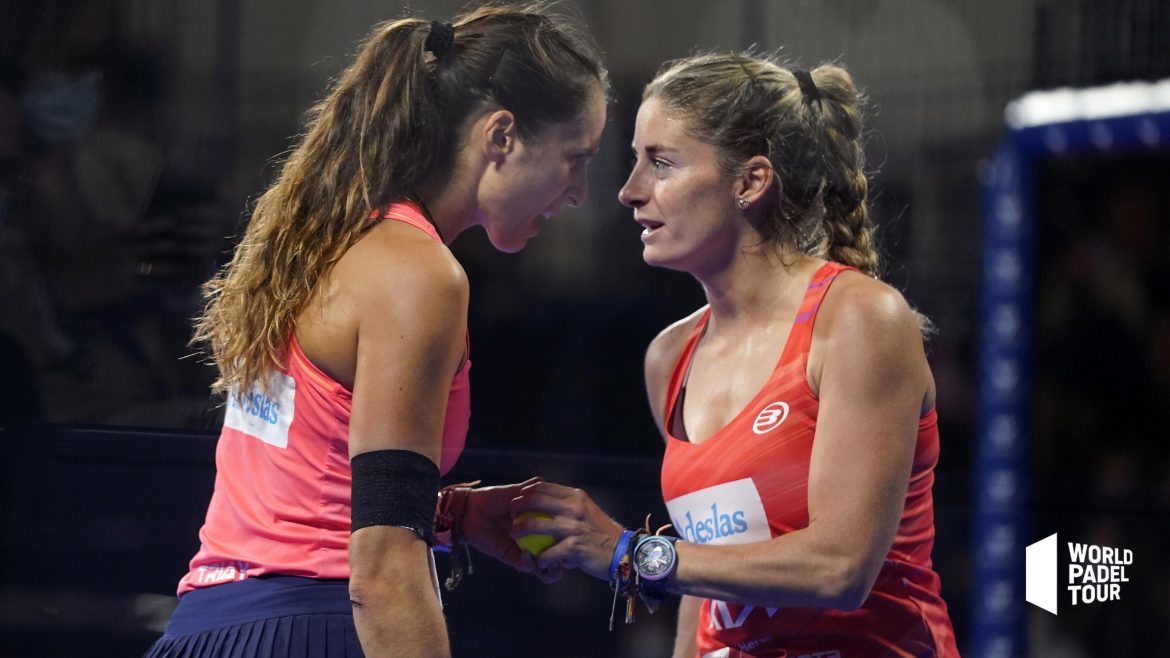 Palais des Sports André Brouat, Friday 11:45 a.m. in Toulouse : World No. 1 Gemma Triay attempts a winning smash, but opposite, Mapi Alayeto manages to graze the ball with the edge of her racket. A gesture which allows her twin sister to obtain in turn a powerful smash, which hits Salazar at the end, however, raising a ''ooooohhhh'' from the public and coming to conclude a spectacular exchange. The Madridista may keep track of the impact, but that's also the padel, knowing how to find the most effective way to score a point, even if it means looking for your opponent's body!

Occurring after 2:15 of play, during the quarter-final between two of the best pairs in the world, this powerful point is also less frequent among the ladies than among the men.

This illustrates the difference in styles of play between boys and girls, at the best level, which is also reflected when we look at playing times. , or even 2 hours (*) clashes between gentlemen rarely exceed 30 hours.

With these people, we talk...

Whose fault is it ? In the first place to the striking power of the men, whose smashes can hit the opponent's window and come back so high that they are indefensible (especially those with a topspin effect); other smashes frequently go off the track, either above the 4 meter fence (par 4) or the 3 meter fence (par 3). In the latter case, it is possible to defend by leaving the field.

Another difference between men and women: communication in the field. Relatively limited for boys, the indications that the players give each other mainly concern the position of the opponents on the track (very useful for those with their backs to the net) and who will play the ball ("yours" or "mine"), as well as imperative injunctions when it is too long (“leave” or “it comes out”).

In addition to these indications, there are many others for girls, such as where to play, where to stand and what type of technical shot to favor (power smash, low kick, lob, etc.). Obviously, it all depends on the players, with some exchanging more when others intuitively understand each other, forcing them to play together.

Strategy on one side, brutality on the other

But overall, we talk a lot more about the women's side, because the points last longer and the pace is slower. Among men, the game sometimes goes so fast that the indication would reach the ears of the neighbor when the point is already finished.

As a result of all this: padel female is more of a strategy sport, a kind of team chess game; and the padel masculine is often more brutal, more technically virtuosic (par 3s and par 4s performed in reverse are frequent there, for example) and spectacular.

Either way, it's an impressive combat sport, where ladies and gentlemen make the best use of their physical power, stamina and weapons within a narrow 20 x 10 meter framework.
(*) Triay and Salazar won against the Alayeto sisters after 3h13 of fighting, qualifying for the semi-finals.

Without contradicting the above, it should be noted that these findings change over time, because the padel has changed enormously in recent years. the padel the old way was very strategic, with a somewhat stereotypical distribution of roles and placements, very fast and often small players on the right of the field, others more powerful and airy on the left.

Le padel of the future practices a less rigid distribution of roles, where the roles are sometimes even reversed between “right-handed” and “left-handed”. Above all, the sizes and athletic abilities of the protagonists increase enormously. This is the case for players like world No. 1 Juan Lebron and Ale Galan, but also Agustin Tapia, Juan Tello or Arturo Coello. All of them are capable of hitting winning smashes from any corner of the court, which was much rarer in the past (the evolution of racquets, surfaces and balls also has its influence).

Le padel female is also experiencing this development, more slowly. But one day, we may see – like in tennis – players 1,85m or taller capable of launching supersonic missiles!