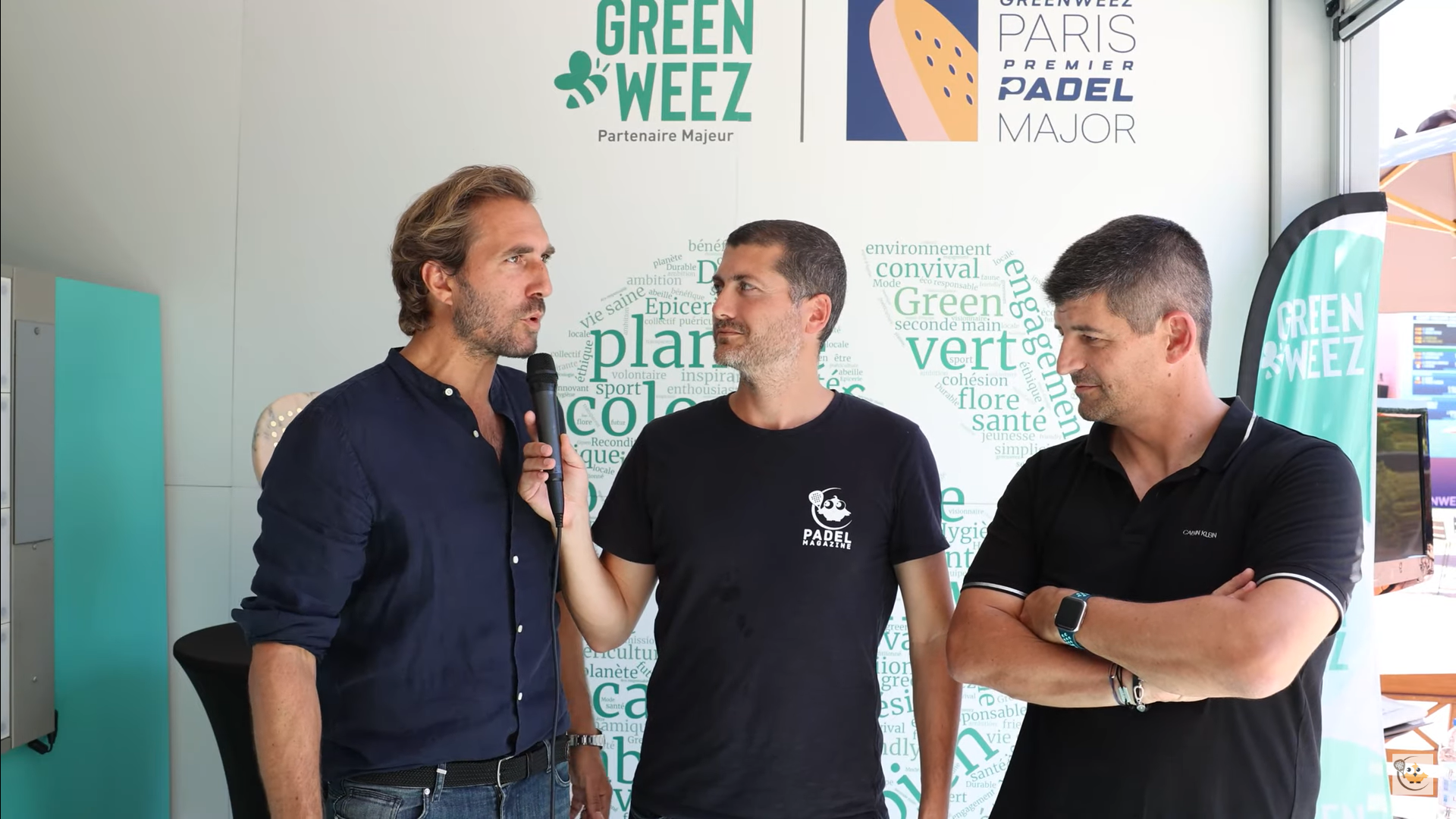 Present on the stand Greenweez, Arnaud Di Pasquale (director of the padel to the FFT) and Romain Roy (CEO and founder of Greenweez) spoke at the microphone of Padel Magazine. On the program: the collaboration between the FFT and Greenweez, the importance of sensitivity to eco-responsibility and food in sport and finally the future of their partnership.

Padel Magazine : How did this collaboration between Greenweez and the FFT come about?

Romain Roy "We've always been a fan of padel. We find that the padel has common values ​​with those of Greenweez since we have always tried to work for the accessibility of organic and eco-responsible products. However, the padel is accessible sport by definition.

Then we have values ​​around people and conviviality, fun and it turns out that these are values ​​that are common with the padel.

It happened quite naturally, I play a lot of padel. I am a big fan of the sport, even if I play very badly. It was natural that we met with the federation around this project and around the padel."

Arnaud Di Pasquale “It's a question of values. We talk about accessibility, sport for all, we also talk about education behind.

There is the Greenweez Paris Premier Padel Major, and there is also the whole federal part on which we also want to work together. We don't just stop at one event with this sumptuous setting: we are going to work well beyond that on the French teams, young people, training and much more global development.

Padel Magazine : In your career, have you ever been helped by organic products, notably supplied by Greenweez?

Arnaud : “To be very honest, I think that in my career about twenty years ago, we were less sensitive and less aware of this cause.

And if I had to talk about an evolution on my side, it's really since I have children. I have the feeling that I have to be careful for them, there is this eco-responsible part that we try to pass on to them. It's a real question of education, it's respect for the planet and everything that goes with it.

It goes through a good diet, through short circuits. It's quite fresh, it's quite recent and I think it has to be hammered because it has to go in! »

Padel Magazine : There are players from padel who would rather play thanks to Greenweez products, what would you advise them? What products could allow them to win thousands of places?

Roman : “Unfortunately I'm not sure that there are products capable of saving thousands of places, otherwise I'm not hiding from you that I would consume them every day (laughs).

Healthy eating isn't just for gamers padel, it's for everyone !

Arnaud said it very well, we often notice that people begin to be aware of these issues when they have children. We still have to worry about what we give them to eat, and then about the state in which we are going to transmit to them the world in which we live today. »

“It was our customers who suggested selling organic products online”

Padel Magazine : You are the founder of Greenweez, how did you come up with the idea of ​​launching the company at a time when there was less sensitivity to organic, to eco-responsibility?

Roman : “At the beginning when we launched the site, we didn't sell food, we mainly sold ecological products. Then it was our customers who suggested that we start selling organic products, because at the time we couldn't buy them online. We listened to our customers and ultimately what was the key to success was listening to the people who bought from us. »

Padel Magazine : Is it a long-term relationship with Greenweez?

Arnaud : "I hope ! Either way, we're off to a good start. The idea is to be part of the long term, today we don't go on this kind of adventure for a “one-shot”. We are on much more global dimensions, we want the federal, we want to exchange as much as possible. We have a lot to learn from them. The sporting world has a lot to learn and to pass on. »

Padel Magazine : Can this diet make a difference? When we see that the players sometimes stand at a few points, the little boost, that could be it.

Roman : “Yes, for example, a player like Belasteguin who remains today at a certain age [Editor's note: 43 years old], he is typically a person who has an exemplary diet. He pays attention to everything he eats, to everything he consumes and this is proof that it is important.

If I take the example of well-known tennis players who are no longer 20 years old, they all have in common the fact of having a very rigorous diet and then of being careful about what they eat. »

Arnaud : " It's exactly that. Romain takes the example of Belasteguin who is 43 years old, but in many sports we see that we can play longer and longer. It is also thanks to all these elements.

It's because we are much better in many respects, medically, in recovery, but recovery is also food. Everything is millimeter, and at the highest level it is there that it is played. »

Roman : “In fact, we are developing in a lot of categories, for two years we have become a marketplace, so we also sell a lot of non-food categories.

Sport is obviously a subject that interests us. We invest a lot in sports and sports partnerships. We started with sports nutrition, we already sell a lot of products in this category. And we are looking with a certain number of equipment manufacturers at how we can add eco-designed products or in any case with an eco-responsible dimension around the sports that interest us, including padel.

We have started discussions with Wilson, but we will continue with other brands. »

Padel Magazine : You mentioned sports, obviously we are talking about padel here but can you give us the other sports that interest you?

Roman : “We are based in Annecy so we are very involved in mountain sports, biathlon, cross-country skiing, alpine skiing, of which we are partners of the French federation. We also participate in sailing with a boat that does the Route du Rhum and the Transat' Jacques Vabre.

We do not refuse to watch other sports.

The essential point for us is the human being and the values, there must be a human "fit" and that we find ourselves in the values ​​defended by the sport, which is completely the case with the padel.

I take this opportunity to point out the exceptional work of the federation, because it is an event that took place in a few months. And when you see the absolutely magnificent result, the center is magical! A big congratulations to the teams of the federation who have done an incredible job in the space of three months.

Next year and the following years it will become a major event. It's going to be absolutely insane! »

Padel Magazine : This partnership between Greenweez and the FFT was also very important because it allowed this event to exist and to be set up in a very short time.

Arnaud : " Of course ! We also owe it to Greenweez among others. It's true that it was essential for us to have a title partner, a “namer”. We needed support.

We can't just embark on such an adventure. Opening the doors of Roland-Garros is very very expensive. The reality is that there is an economy behind it, it's fine to say that the padel is booming but we needed support and partners.

Greenweez immediately showed a very strong interest, and that boosted us. It made us want to continue with this project.

Today is the culmination of this project, it's a first year with very, very beautiful things. There will be adjustments and it will necessarily get better and better. »