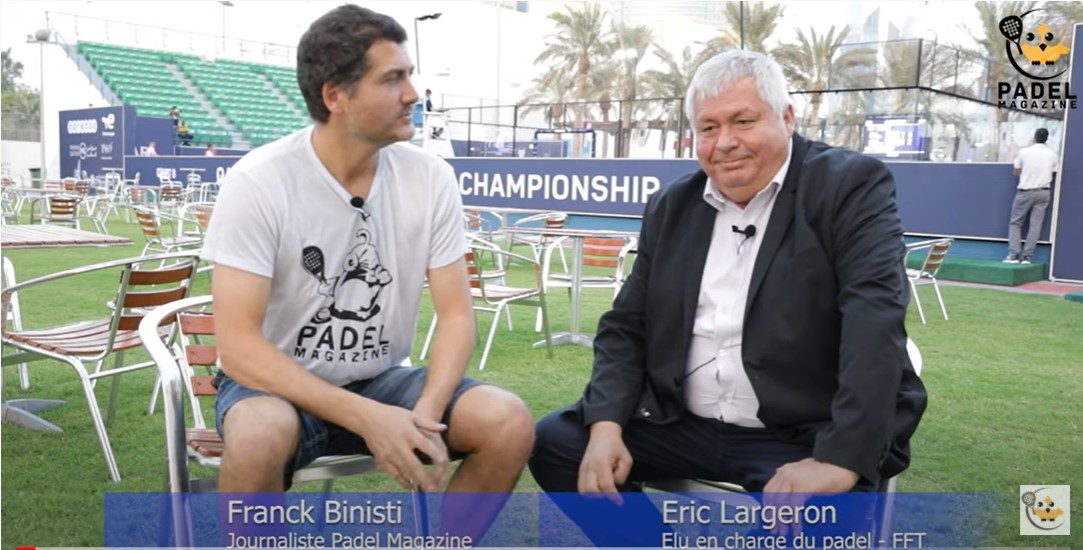 Padel Magazine had the opportunity to talk for a few moments with Eric Largeron, the elected official in charge of Padel at the FFT during the World Cup in Qatar.

After being able to exchange with Gilles Moretton on the future of padel, this time it's the turn of Mr. Largeron to give us some additional details on the present but also the future of this sport.

As you will see, the two men returned to the framework and the exceptional organization set up by the host country.

We have already mentioned it several times and the compliments about the organization of these Worlds keep coming.

Indeed, the players, the staff, the organizations and even the public agree in recognizing that Qatar has not stolen its reputation as a hospitable country and that the means put in place to delight all the speakers have been exceptional.

During our interview with Eric Largeron, he agreed that: ” The means used for tennis have been duplicated for the padel".

These elements tend to prove once again that Qatar has been willing to go the extra mile for this sport which is very popular around the world.

He recalls that the Doha Tennis Club has hosted the best ATP tournament for more than four years.

The future of padel

Franck Binisti asked his guest of the day what he thought of the situation of padel in France and especially what would be the ideas that we could borrow from these Worlds to be inspired by them in France.

Eric Largeron" It is difficult on French territory to build a padel on a tennis court, it cannot be done everywhere but who knows maybe that one day it will be possible ”.

He adds : “As for the organization, it is the seriousness that counts and the means put in place such as telecommunications, transport, reception of players, their dedicated space, the village, the facilities etc”.

The two men returned briefly to the TFP, a diploma allowing them to become a coach or trainer of padel, but also on the license padel.

“We have a reflection on the tennis license and padel so that everyone can find something for themselves ” Eric concludes.

Another important topic for the French Tennis Federation it is the promotion and development of padel in the regions of France which are not yet sufficiently provided in terms of infrastructure.

To the question of our journalist concerning the points that the FFT would like to put in place in the future, the elected representative in charge of padel answered first by declaring that the priority would be to continue to consolidate what has already been done.

Another subject which would be in the pipes: the creation of a club championship by teams like what is already done in tennis. A concept that could greatly appeal to the different clubs of padel.

During this exchange Eric Largeron also returns to the difference between private and associative structures.

The whole of this rich interview can be found below: