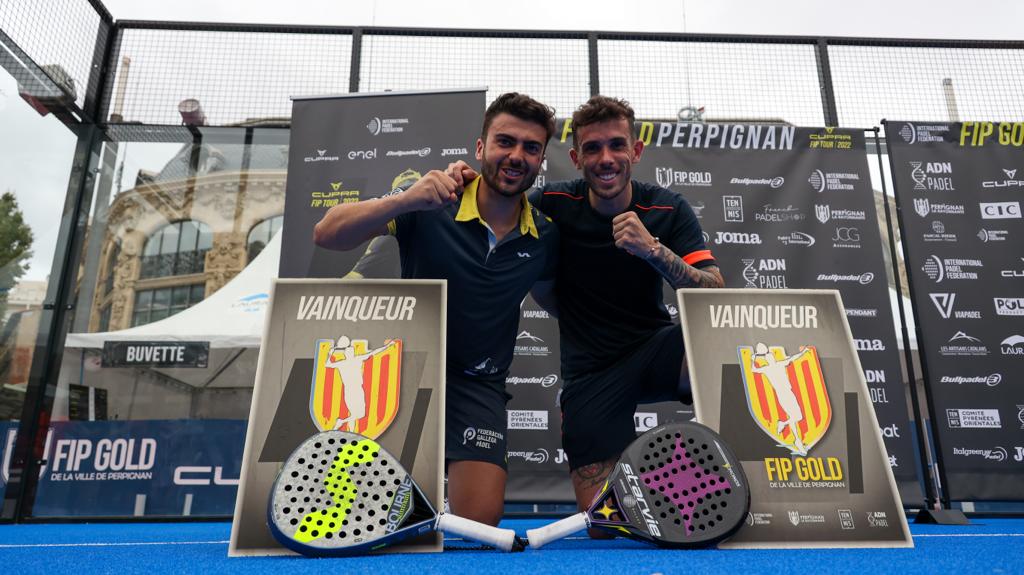 After 3 sets of an exceptional level, the Vilariño/Ramirez pair brilliantly won the first edition of this FIP Gold Perpignan !

As announced in the article presenting the meeting, the playing conditions were special. And this in particular because of a very strong heat and a particularly sunny sky. However, another parameter was added to the equation: the wind, further complicating the situation for the players. Despite this, the public responded. The stands of the place of Catalonia of Perpignan were full of people to attend the show proposed this afternoon.

The show let's talk about it. We knew by seeing the poster that we would be entitled to a very good fight during this final. A very balanced match which would be decided on a few details, with the key to the match being the management of the playing conditions, as the level of the four players was equivalent.

From the first points, the players understood that they would have to adapt to these specific conditions. Bothered by the sun, the players favored variation rather than daring smash attempts. A Nacho Vilariño, who had stood out for his quality of smash precisely during the whole week, was rather confined to looking for areas putting his vis-à-vis in difficulty. A strategy that worked since he and his partner won the first set.

The second set was special. Why ? Because a bit like the first round, we had a false rhythm with no team really taking the lead in the game. However, the Vera/Garcia pair put more impact in their game and especially on the volley with more aggression. Opposite the duo, and especially Fran, began to commit more and more unforced errors which ended up being paid cash at the end of the set.

The highlight of the show: the 3rd set

If we felt that the players were probably a little timid by the stakes in the first two sets, and that the conditions played a fairly preponderant role, the last round was a parenthesis apart from this match.

With a calm wind and an overcast sky, it was absolutely not the same match. A set everywhere on each side, ball in the center. The winner would obviously be the strongest technically, physically and mentally. The level went up a notch on both sides of the net, the match had absolutely nothing to do. The one who best embodies this change is Fran Ramirez. If his partner Nacho was the one who attracted the light throughout the competition, it was Fran who made the difference in this 3rd set by positioning himself as the team's metronome and by not committing any more faults. He notably allowed his team to obtain a break which would lead them to the final victory.

A rather unprecedented victory because it is the first time that Nacho Vilariño and Fran Ramirez have played together, and unprecedented in the sense that they are the first players to win FIP Gold on French soil.