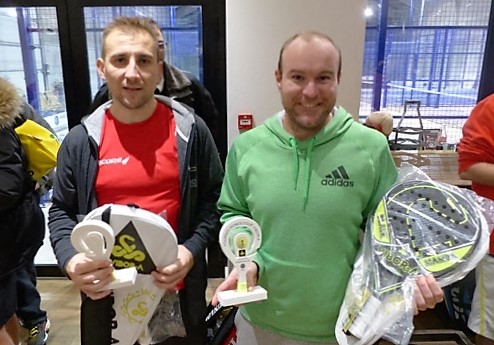 In the wake of the last French Championships, Padel Attitude in Lesquin hosted 40 teams for the tournament "Vibor-a" this Sunday November 6.An interesting plateau, composed of the best local pairs, reinforced by teams from all over France (Paris, Lyon, Grenoble, Amiens) and Belgium.Already fights in the 8 5 hens teams to take one of the first 2 qualifying places for the final table.

One big surprise in pools, Romanowski and Dulion lose their duel against Conty and Melot, the players of the club Bois d'Arcy (The Padel Club). A result which upsets the final table by offering from the 8th a duel between the 2 best regional teams: Romanowski / Dulion VS Landtsheere / Lecomte. They are the ones who pay the price for this scenario and leave the tournament early in the day.The 8e and 1 / 4 take care of eliminating many other stamped "Padel Attitude" teams.

This scenario gives way to 2 beautiful semi-finals.
A 1st “Hauts de France” which saw Quillet / Kosir win over Romanowski / Dulion.A second “Parisienne” from which the Gimenez / Lepanse pair emerges to the detriment of the Dubourg / Pommier duo.In the final, facing the Quillet / Kosir team tired by a course without an “easy” match, the talented Gimenez / Lepanse team recited a beautiful Padel to raise the trophy after a magnificent day masterfully orchestrated by referee Jonathan Saleta.
Highly the next tournament at Padel Attitude, reference center in France, which promises already a big news on the end of the year and the beginning 2017!