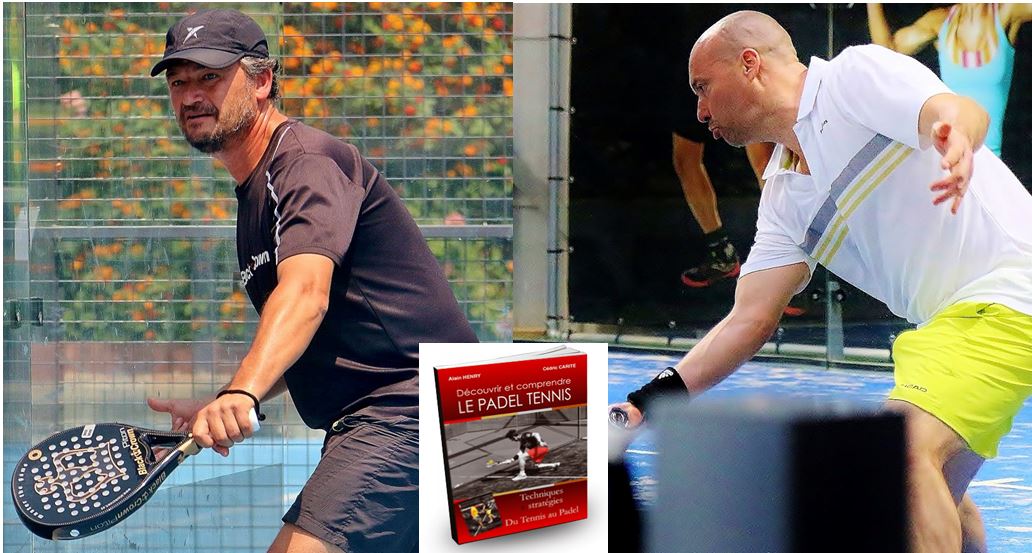 2 figures from the French padel come back on their journey and the culmination of their padel book: ''Discover and understand padel tennis':

Cédric CARITE, recent European Champion 2015 with the team of France, specialist and founder of the first French training organization " Padel Tennis Academy And Alain HENRY, manager of one of the largest and most active French paddle clubs, the MAS Club in Perpignan.

Padel Magazine - Can you tell us about your “padelistic” journey?

Alain Henry (AH) - My first contact with the padel was in Spain since we are only 15 minutes from Perpignan. Back at my tennis club, we decided with my partner to launch the first padel pitch in the region. My apprenticeship was in Southern Catalonia, a big padel land. My 25 years of experience in tennis also helped me in learning this sport, the padel. And I think I am the perfect example of the guy who switched padel tennis.

My meeting with Cédric also allowed me to evolve and adapt my tennis experience to the padel.

Cédric Carité (CC) - A very long story! I discovered very briefly the padel during my STAPS studies in Toulouse in 1993. I then really resumed the sport in 2004 and allowed me to participate in the World Cup in Buenos Aires after winning the championship of France the same year.

Since 2004, I can say that I am the only person to have occupied all the posts and managed all the possible missions in the French padel:

PM - @Alain: Today your club offers 3 more fields. Would you be willing to build more? Did you think that your multi-racket club would be so involved in the padel?

AH - With 6 courts of Padel, 5 squash courts and 2 tennis courts, our structure is one of the few to offer these 3 sports on the same site. We can always develop more, but the construction of padel courts must be linked to a real desire for development based on passion and hospitality. This sport requires more involvement than other racket sports because it is necessary to put players in touch, make them discover the activity and teach them the basics of the game. At the Mas we are always concerned with innovating and offering New projects.

PM - You are very involved in the padel. There are many new players starting out. What would be your first advice?

AH - First of all, this sport is a fun game. We must therefore take advantage of the team side. Then, you will have to make the effort to learn to use the structure very quickly to switch in the mind Padel, and finally to face a lot of different opponents to gain experience. Let's not forget that the world n ° 1 at 37 years old.

CC - You have to get closer to a real padel specialist to avoid taking bad habits. Especially if the player is tennis player because quickly, we realize that it is a sport in itself that must be respected as such. Alain and I come from tennis, and we specialized in the padel and his teaching.

AH - The originality of the book is to make the transition from tennis to padel. The confirmed tennis player must put his ego aside in order to use his tennis skills to put them at the service of the tennis player. Padel. The advantage for a tennis player, a squash player or a table tennis player is that he will not start padel.

CC - he will have to agree to become a beginner again on certain phases of the game to better progress then. Agree not to play tennis on a padel court, but put his tennis skills in the service of building a padel player.

PM - The culmination of this book is a long journey. Can you tell us why you wrote this book and how did you approach the approach of this book?

AH - We have worked a year and a half to offer this book. The objective was to create a tool in French for understanding this game. Everything has to be created in terms of pedagogy and training. It is this challenge that is the trigger for this work. Starting from tennis, the big brother of Padel, we show that the Padel is a sport in its own right with its own techniques and strategies.

CC - Since 2009, I am the only person in France to come to all the clubs to help them. First within what we believed to be a padel federation, then with the National League and now with Padel Tennis Academy.

As time went by, Alain and I were still so much in demand in terms of educational training, we wanted to respond in a comprehensive way by presenting and analyzing the padel in relation to tennis, his new home.

PM - Your courses are different even though tennis is a common matrix. Will this book allow those who have never played tennis to help them technically?

Ah of course. Even if it will be easier for a tennis player to walk with us towards the Padel, this book is also aimed at the non-racquet sportsman by also explaining the essential rules, the adequate equipment and of course the techniques and playing patterns necessary for a good practice of the racket. Padel.

This book will show them first that there is no need to be from tennis to start the padel and enjoy it.

We regularly see very good tennis players, still active, losing against padel specialists who had a level "tennis" much less. One plays tennis on a padel court, and the other plays padel ... And it's a real pleasure for non tennis players to compete with the tennis players ...

PM - Finally, last question. How do you see the future of Padel in France. ?

AH - Cédric is one of the people who got involved and campaigned for the Padel integrates the tennis federation. We followed him with other clubs from the start in his fight to make things happen. Today, it is done. The FFT has just welcomed the sport which could allow it to gain 250 to 500 licensees in the next 000 years, if not more. I sincerely believe that the Padel is a chance for tennis. It must be given the means to develop. For this, there are solutions, the first of which is to create a PADEL license to accurately measure the evolution of practitioners. The Padel is not beach tennis even if I respect this discipline.

The federation must go faster to structure and train. In 3 years of existence of Padel within my club I have never had a visit from a member of the federation.

Covering and developing Roland Garros is an undeniable necessity, but keeping and increasing the number of its participants is even more so. Suggest, move, innovate to always move forward and progress, the Padel goes in this direction.

With or without federation on Padel will develop and more and more tennis players will go to the Padel while the reverse will be rarer. As in Spain private circuits already exist, sponsors and passionate personalities are already involved in this development.

CC - Indeed, the integration of padel with the FFT was my goal and that of the LNP. The padel has since 4 July 2014 a solid and durable structural base that allows now to project on the medium and long term.

In this, the future of the padel is assured and will be positive. As in the rest of the world, its notoriety continues to grow and the number of clubs and players too. And the goal in France is that it is at the maximum in the FFT, even if the clubs that rise are private.

Unfortunately, since its integration, the FFT has hardly wished to open up to understand this sport and to be interested in what was happening before in France and abroad. Structurally (National League), sports (French competitions, international formats of games), or educational (training in place). And the decisions taken are debatable and question on the consideration made to this sport.

For example, in sports, France is the only country in the world to use a game format in no-ad and super tie-break, or even 9 games (which completely distorts the sport: Is Richard GASQUET would have won his match in Montpellier when he was led 6 / 1 3 / 0 by an opponent in trance if the game format had been 9 games?). Even if it is adapted to the private circuits that play on a we, the search for license at any price does not give the example of a treated sport in its own right.

The men's France team was also European champion in December 2015, and the girls vice-champions of Europe, without the slightest interest of the FFT (no financial support, not even team outfits from France , nobody on the spot etc ...).

Even the book has not attracted much interest.

In other countries, the padel develops more in parallel with the federations than within them. It would be a pity that this is so in France because all the work I have done was in the direction of the FFT with the help of the Ministry of Sports.