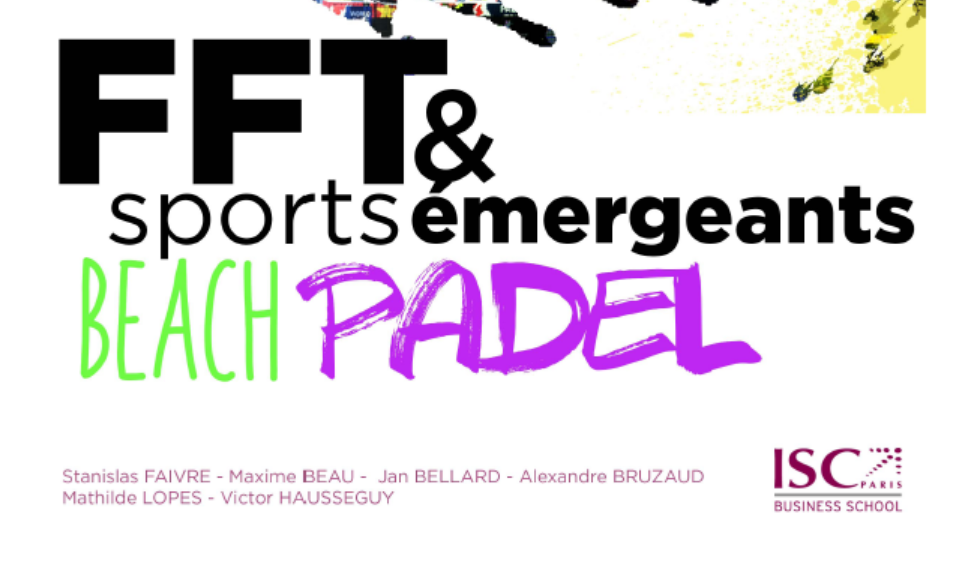 We see many clubs of padel and paddle players mixed on the involvement of the French Tennis Federation in the beach and the padel. Some even point the finger at the FFT in relation to the development of the beach in France. Of the couple padel will he take the same path?

The current situation of these sports in France

Beach Tennis and Padel are still very little known sports in mainland France. They are most often played by the sea, in particular for Beach Tennis which is highly developed in Reunion. According to Héloïse Clavel, the Padel counts between 5 and 000 participants against 6 for Beach Tennis.

The FFT therefore relies on Padel to “boost Beach Tennis”. So the Padel begins to make itself known more and more by the population thanks to private structures (in the model of Urban foot - Le Five - Soccer Park) which flourish in particular in the Paris region.

The FFT is thinking about expanding these sports to the greatest numbers and increasing their notoriety. For this, a field of Beach Tennis will be installed on the new format of Roland Garros.

The FFT is also looking into a new "short-term" license format, such as licenses only for Beach Tennis players in the summer at the beach.

After the interviews and our personal research, several cases are possible. Several solutions exist despite financial obstacles. As in any young sector, you have to take risks that will pay off.

In the case of Padel and Beach Tennis, sports absorbed by the French Tennis Federation, the development is struggling to be implemented despite various players who give momentum to these disciplines. The FFT faces costly demands and tennis is still the queen discipline. Here is an inventory of what can be done to boost these emerging racquet sports.

Since the middle of the 2000 years, sports halls are located on the outskirts of cities.

Major sports complexes are born: fitness, football, tennis, badminton, squash. The major achievements are exclusively related to fitness with countless fitness and football gyms at 5, a real phenomenon where there are several players who monopolize the entire market of private sports supply.

Sport is good for your health, the public are now willing to pay to let off steam for an hour or two (sometimes at exorbitant prices). The padel is no exception to the rule, indeed, Héloïse Clavel at the direction of the federal life of the FFT tells us that 34 private structures integrate padel in their sports centers.

Today, no center dedicated exclusively to beach or padel was opened, but Franck Binisti, founder of the site Padel Magazine puts us in the confidence: " 100% clubs Padel are settling down Especially in Lille. These type of centers operate on the same principle as the Urban Soccer model with a rental on the hour of the grounds by individuals, professionals or clubs affiliated to the Federation (common practice in football where clubs go to clubs. football structures at 5 to keep some fitness during the winter).

This type of structure is a significant complement for tennis clubs wishing to move towards the development of these emerging practices. Some people have a negative view of the appearance of these centers as they can be judged as unfair competition to existing affiliated clubs. " But there can be conflict if a municipal club sets up a club next to another private club with public money and gives access to the grounds for 150 € per year "Tells us all the people contacted.

Nevertheless, a partnership, an association with one or more local clubs would be extremely beneficial for all stakeholders: the centers, the clubs and the federation. The whole thing is to skillfully coordinate the different interests of each one. The major problem for the federation is as follows: how do you recover these practitioners to turn them into licensees?

It is interesting to note that no private center dedicated to beach tennis exists at the moment. What give ideas to young people fresh out of a Master's degree in marketing and sports management.

Many tennis clubs take the form of an association, but faced with a high cost represented by the installation of dedicated infrastructures for the beach or padel, many clubs are reluctant to promote these practices.

For beach tennis, the catchment areas are located mainly on the coastlines of the metropolis and in the DOM - TOM. The Hoarau sisters, pair n ° 1 French in beach, we explain that parallel associations are created to boost their sport, associations that are not under the aegis of a tennis club: "The beach associations have multiplied, but it is true that few tennis clubs have a beach. The financial cost of an artificial beach structure (and his interview) is for me a reason that could explain this observation. »

For the moment, it is very difficult to quantify this phenomenon despite the support of the French Tennis Federation. Nevertheless, the financial and material contribution of the FFT remains very weak so far.

As with a classic product, any emerging sport must be known to the general public. Thus, the FFT takes advantage of the largest French tennis exhibition to promote the beach and the padel : Roland Garros.

Both presented in exhibition / demonstration format, these practices met overall positive feedback from visitors even though the beach really worked better than the pade"says Héloïse Clavel.

The "fun" and "easy to learn" characters play a huge role in this communication in order to introduce these sports to as many people as possible. From a more professional point of view, the hypothesis of a Pôle Espoir dedicated to beach and padel is being observed within the FFT: " At the beach level, the request was made by some licensees to Jeremy Botton, deputy director, especially for financial aid, infrastructure is more difficult ».

A pole padel and beach in the bins?

In any case, the idea is closely studied by the FFT. From an international point of view, the padel and the beach are candidates to be presented at the Olympic Games as demonstration disciplines in the near future. As said previously, beach tennis takes on a more important dimension on the coasts and in the DOM -‐ TOM.

We interviewed Frédéric Pamart, who wants to create a beach tennis structure within a Reunion tennis club: " 4 lit fields, creation of a school dedicated to the Beach: "This is not for me a bet, but a logic in the direction of the integration of Beach Tennis in the FFT ».

This practice seems to be developing on French coasts, but for now no project in the beach has reached its ultimate and concrete stage. Finally, in the possible solutions, it would be necessary to rely on the influential figures of the tennis world to assume the role of ambassadors of these emerging sports.

Mahut represents a company (EPS), he creates land, just like Henri Leconte who has his own franchise (Henri Leconte Padel).

There are many tennis players who are fans of Padeleven people within the FFT. The FFT could rely on the aura that these personalities exude in order to democratize the padel or the beach, but surely at the end of their careers.

[toggle title = ”Author: Alexandre BRUZAUD,” state = ”open”] Graduated with a Master's degree (specialization in sports marketing and management) at ISC Paris Business School. On a permanent contract since the end of my studies at Adidas France as sales manager in charge of the Paris / North region. Passionate about sport, I discovered and joined the Padel during my Erasmus in 2013 in Spain. [/ toggle]