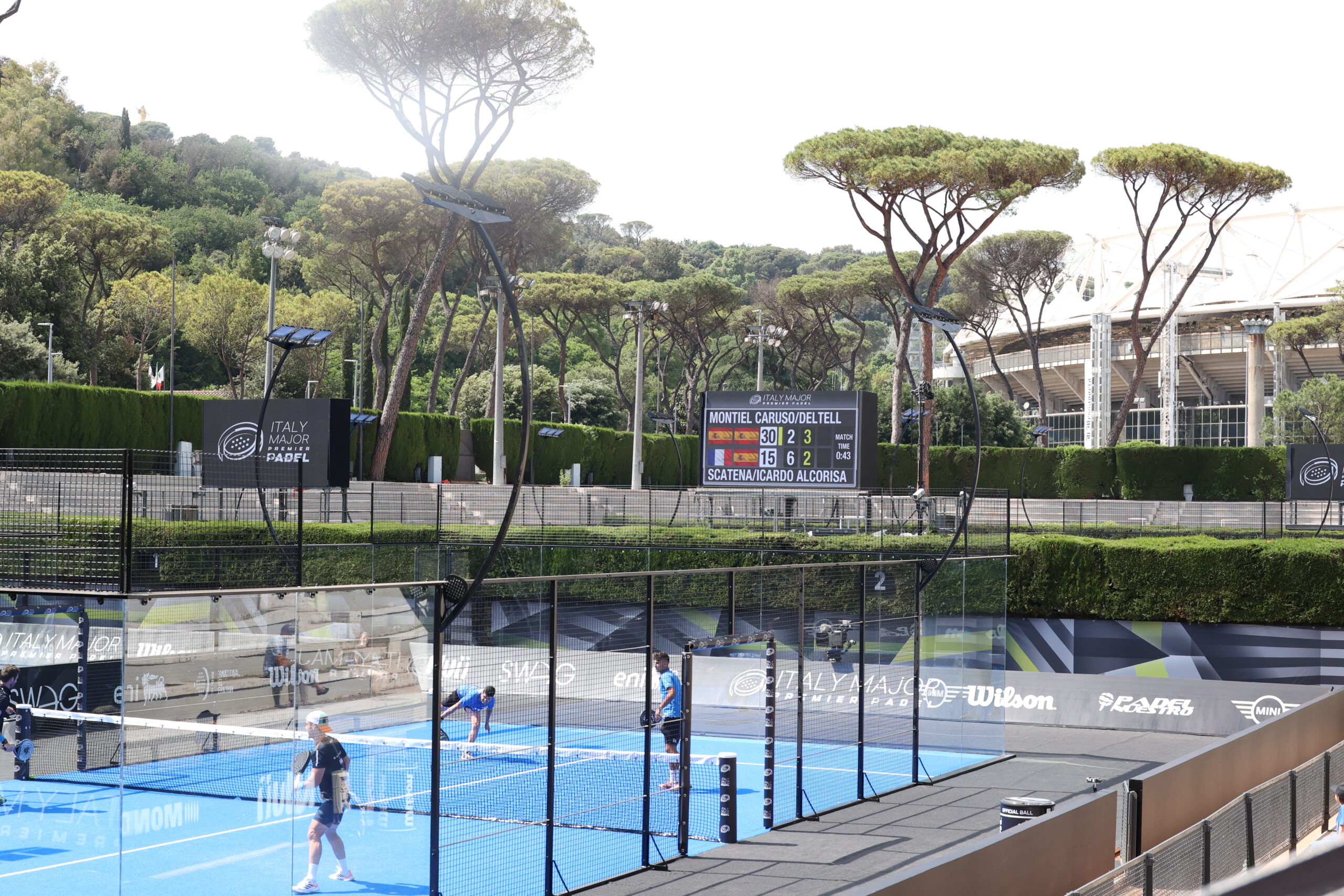 Present in Rome as part of this Italy Major Premier Padel, Padel Magazine analyzes the organization of the tournament. Focus on a successful Roman edition.

First of all the place. What more can be said. The first impression you have when entering the historical and sports complex of Foro Italico is that you are in a place steeped in history. With the courts arranged one after the other and the mythical grandstands taking up the Roman architectural style of yesteryear, you have the feeling that you are about to attend something. That something that makes your days special. This something that is the essence of the show. That something that is the soul of sport.

By choosing this very special place built in the 30s and which notably hosted the Olympic Games in 1960 as well as other large-scale events (such as Football World Cup matches for example), the ambition of Premier Padel was to mark the occasion. And it is successful!

Five courts have been selected to guarantee an exceptional spectacle for all the players as well as the many spectators who come to attend this padel.

But be careful, it was not a foregone conclusion for Premier Padel. Because if the first Major in Doha was a total success, there was a VERY important criterion to take into account: the competition took place at “home”. The organizers therefore mastered all the elements and constraints that they could encounter on site, which immediately reduced any margin of error.

There, we are talking about the organization of a competition in a country with a completely different culture, a completely different reality. And that, Premier Padel understood it well. And down to the smallest detail. Everything is well thought out, from the partner merchant stands, to the food stands (mostly offering Italian specialities). These are the details that enhance the visitor experience. This experience being crucial, because it is the image of the whole organization that is at stake. In our ultra-globalized society, everything is interconnected: if the Italian visitor is not convinced by the current event and he makes it known on social networks, the potential future French visitor who hesitated to go to Roland-Garros could ultimately choose not to go. This would have unprecedented repercussions for Premier Padel.

Yes, but it's not. On an entire wing of the Foro Italico, a real visitor area has been dedicated precisely to enhance this visitor experience. Animations have been installed: with two free access tracks (palas and balls are available), a "smash" workshop for young people and the most curious, as well as many green spaces allowing the public to shelter from the scorching sun of Rome.

All these facilities can already be a success, as the public adheres to these events and puts their heart into supporting their favorite players (as we have seen in each match of Jérémy Scatena, who has become the one of the darlings of the Roman public).

Now let's talk about our reception, the media reception. When you arrive, the first thing to do is to collect your accreditation, without which any work on a competition of this magnitude is impossible. In this large white building, which is one of the wings of the Italian National Olympic Committee, you are told where to go to collect your accreditation and be able to start the job.

Once the accreditation has been collected, head to the media area. Zone where you find all the journalists and different media from all over the world who came to cover the event. As it is a little far from the courts and from the "village" created for the event, it also allows you to escape from the intense Roman heat and to be able to concentrate to carry out the latent tasks (processing photos, writing items, etc). In this area, it feels like a UN summit: a wide range of nationalities is present (Sweden, Spain, Argentina, Spain, France, etc.), great discussions take place and also press conferences take place . A real place of exchange of information and cultures.

On the side of the players, it is also full card. As in Doha, they were won over by the treatment reserved by the organizers, who do their utmost to ensure that each of them (regardless of their ranking) can benefit from the best possible conditions.

And the world number 1 goes in this direction: “As with you the press, the treatment of the players is impeccable. Beyond the competition which is impressive, I am surprised by the ability to react when you need a physiotherapist or a doctor. If something happens, you have 5 physios around you. These are the things that give me goosebumps. From the first to the last player, we are all super happy”, replied Juan Lebron to the question of Padel Magazine.

This recognition vis-à-vis the players is part of the philosophy of Premier Padel : to offer a prestigious service, so that there is a rendering of prestige on the ground as well.

Continuing its merry way, the circuit Premier Padel puts the small dishes in the big ones in order to register as THE reference in the world of padel. By mastering almost perfectly the management of the players/media/public triptych, the leaders of Premier Padel have put their finger on the key elements that can enable them to succeed.

This Roman edition, it must be said, is a success at all levels: the players are happy, the public is happy and the organizers are happy. What more ?

To have a competition of this caliber at Roland-Garros? No, to be able to do even better.