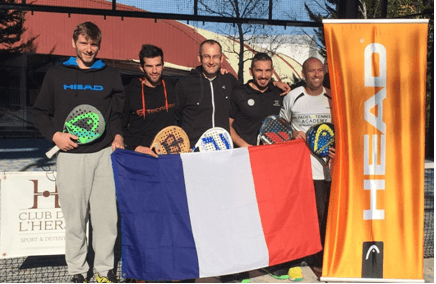 The Ladies and Gentlemen teams refine their last set-up this Sunday before for some the big start to the Netherlands tomorrow for the Padel European Championships.

The men's French team of Padel, equipped by Head France, found themselves all weekend over Toulouse in training and cohesion training to prepare for the next European Championship which takes place from 2 to 6 next December in The Hague (Holland).

Basketball drills, themed games and competition games followed one another in a compact program that took place first at the Toulouse Padel Club on Saturday and then at the Club de l'Hers on Sunday.

Beside these sports festivities, other moments of conviviality shared around meals in group allowed to weld a team Men "left to itself by our federation"Will describe most of the players of the France team.

"It was necessary that we financed ourselves with the help of the sponsors the adventure of the championships of France of padel in the Netherlands. We have not received any help from our Federation (the French Tennis Federation) "explain with one voice the team of France.

It must be said that they have been forced to use brands like HEAD to help them finance their adventure at the Padel Club de la Playa.

The first starts for Holland will be Monday November 30, other players will arrive on Tuesday for a start of competitions on Wednesday 2 December.

But beware of other countries that are also seeing the padel take an exponential growth, Portugal and Italy in particular, with levels of play that are also progressing very quickly.

The balance of power may well be turned upside down and a new balance will be official this year.

Good luck to them.