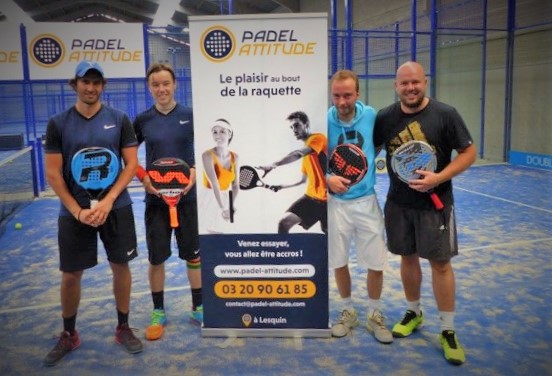 On June 18, 2016, 19 “northerner” teams met at Padel Attitude in Lesquin, to party, on the occasion of the 2st Padel Flanders Championships.

A wonderful day Padel, as always, with a level always progressing in the North and a padelistic atmosphere at the top.

A fairly quiet group stage for the favorites even if, the first surprise of the day, the Breton / Vandendriessche pair removed from the first match any chance of qualification at Plisson / Lecomte normally armed to join the quarters without problem…

The first 2 of each group reach the ¼ finals which will make a first victim: Jonathan Saleta. Orphan this year from his double Antoine Tanfin who is devoting himself to his studies, the “Jo” is struggling to land with a new partner to return to the top.

At the attack of the semifinals, it is Thibault Nollet / Thibaut Lecomte who have the heavy task to face the pair which dominates the region Johan Romanowski / Thomas Dulion.

Match tight and disputed, maybe a little more than expected, but the first cities come to the final logically.

The other semi-final opposes Maxime Lecomte / Florian Landtsheere to the formidable pair Sebastien Fievet / Pierre Destombes. These last, usual dolphins, are seen robbing politeness and it is “Max and FLo” which pass in final.

During the latter, the intensity drops a notch, the 2 teams are qualified for the "inter-regions". It is logically the Pair Romanowski / Dulion who wins and brings back to the Valenciennois their second title of Champions of Flanders.

Day that presages beautiful championships of France in October At Padel Attitude in Lesquin with 4 additional indoor padel courts!

Small information for future qualified ... The grounds are the game of defenders, very comfortable and slow carpets, very absorbent windows ... With a high ceiling to lober very high, the ball often goes down with snow on it ...