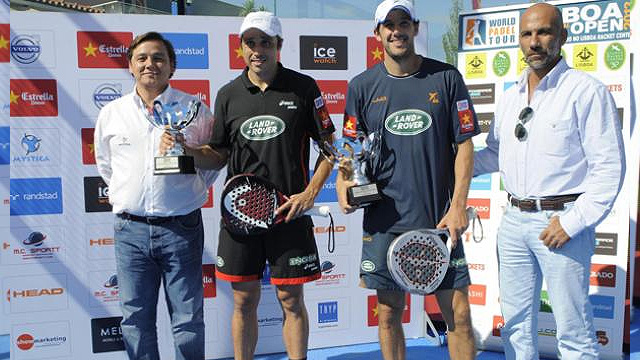 Padel Magazine - Whatever the quality of the short, the weather, or something else, the result is always the same: A reign without sharing.

Juan Martín Díaz and Fernando Belasteguin have again shown their superiority against the world number two. Juan and Bela have indeed collected one more title in Lisbon. If we wanted to talk about numbers, we could say that it is the tenth title of the season, the 30th consecutive games without defeat or that in the last thirteen tournaments, they have lost only 3 times including twice in the finals. All these figures show one thing: Is there a pair capable of competing against the current kings of padel? Without taking too much risk, we can answer in the affirmative.

To return to this final against Juani Mieres and Pablo Lima, the princes were defeated in four sets (6/3, 2/6, 6/3 and 6/4) in just over 2 hours and 20 minutes. It was the ninth time they have faced each other this year and after the big tournament achieved by the world numbers 2, one could expect an upheaval. But once again, the Kings have shown that Sunday is their day.

The public, in large numbers, gathered at the Racket Lisboa Center. He clearly chose his clan by obviously supporting the Brazilian, Pablo Lima.

Led 4-1 fairly quickly, Juan and Bela quietly finished this set to win 6/3. It was then that things went wrong for the numbers 1, since the princes had decided to put the 2nd by leading 4/0 in the 2nd set. Mieres and Lima were over-motivated and wanted to prove to the public that they had come to make an appearance. Finally, the set was won 6/2.

We were expecting a big match from both pairs, but again, after winning the second set, Mieres and Pablo gave up a bit while the world numbers played better. The third and 2th set were pocketed by Bela and Juan without any real big alert, except perhaps the break points saved in the beginning of the 4th.

The Portuguese were able to see big show with the two best pairs in the world. We could not do better.