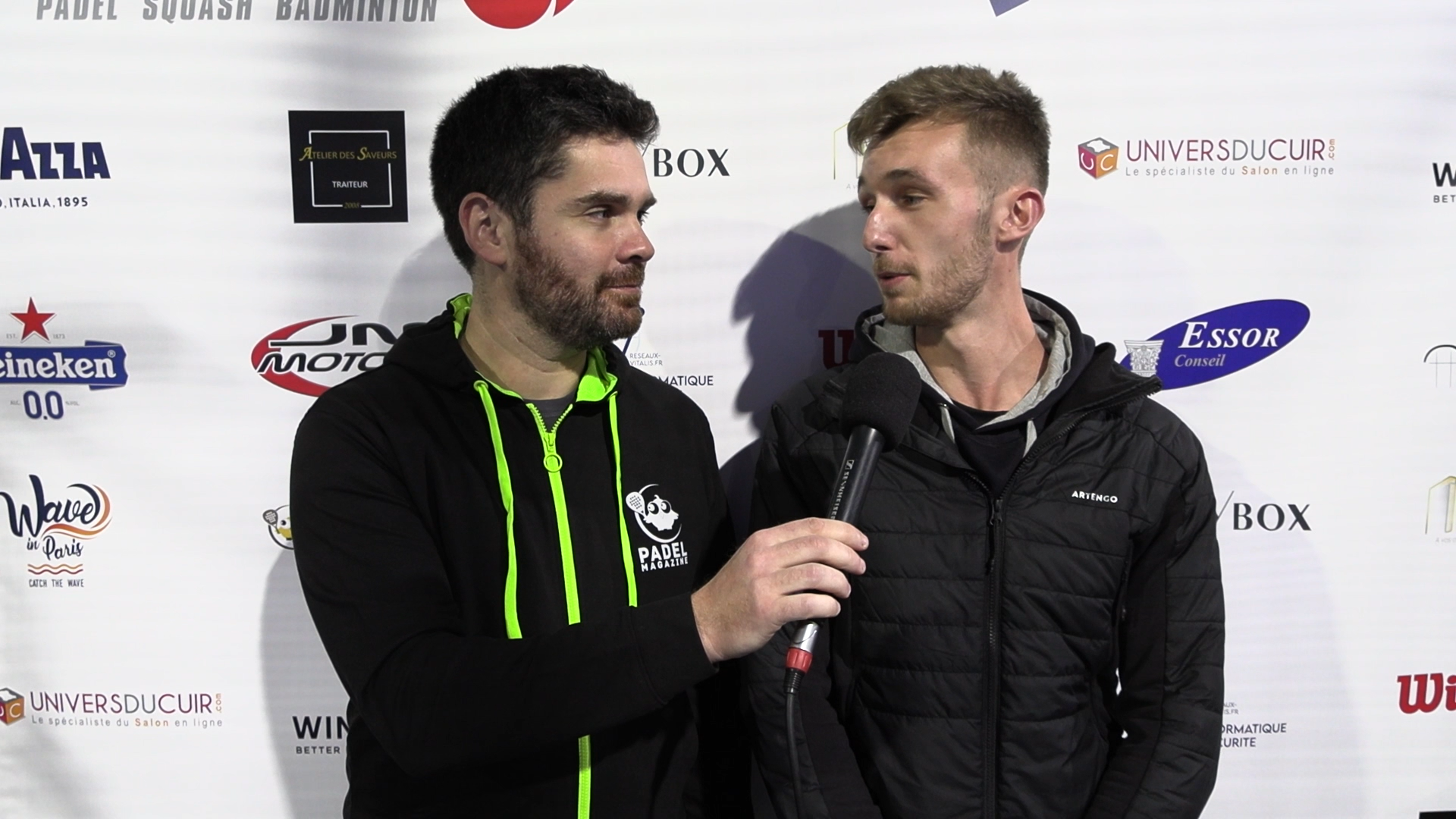 Both youtuber and player, Julien Seurin brings a breath of fresh air to the sphere padel French. Lucid, young and ambitious, he gave us an interview during the P2000 Padel Horizon.

Padel Magazine : Julien for those who don't know you, can you introduce yourself to our readers?

Julien Seurin : “I am 24 years old, I am a player of padel for 3 years now and I play tennis at the base. I am now the 35th French player, and I have a YouTube channel too. »

Padel Magazine : You have a YouTube channel that has exceeded 1000 subscribers, whose link is to be found here. Can you explain to us how this YouTube channel came about and what are you doing on it?

Julien Seurin : “This YouTube channel is a collaboration with Arthur Marie who is the brother of Jules Marie. He was looking for someone to do the same thing as Jules but at the padel.

I received a lot of messages last summer because friends of mine had seen his com' and I said to myself "go why not". I didn't have time to work 100% on the project, so it was perfect to collaborate and relieve myself of some missions (especially editing). So it was fine. Since last August I said to myself, I try the adventure and all the tournaments of padel in which I participate I film them. I try to take some of the reactions of my partners and opponents, we make a summary of all that and we get a YouTube video. I have a lot of fun doing that! »

Padel Magazine : When you started, what was your ranking?

Julien Seurin : “Whoa when I started I must have been 150th or something like that. And small -Little by little, what was good is that Arthur was seduced by the project. I came from afar, at first he was maybe looking for someone with a good ranking and in the end he liked the idea of ​​building a little path around a player's career and seeing how far it can go. We are very motivated to continue. »

Padel Magazine : Precisely you attacked the padel 3 years ago you were 150th 10-12 months ago and now 35th. Can you tell us what the rest holds for you, your goals and your projects?

Julien Seurin : “The ultimate goal for me remains to join the French Top 10, I said it on video, that's a very long-term goal. It's a common thread in my life as a player. padel, but there the objective would be to quickly enter the top 30, that would be cool. I hope the P2000s will help me achieve the goal, I have done little. Since I haven't been playing for very long padel, at the P2000 I started in qualifying and that didn't bring me any points. So top 30 quickly I hope and top 20 at the end of the year would be a very good goal.

After projects, I'm very frustrated at the moment because I can't find the time to be able to train. I'm more of the type to do things thoroughly and there the fact of not having time to train that annoys me a little. I plan to go and train in the country where the padel is king in Spain. This is the project for September. With Arthur we work a lot to try to find financial resources, nothing is certain. We talk about it more and more, I called Dylan Guichard who is training in Madrid, Benjamin Tison who was very open and gave me all the necessary information, thanks to him by the way. But now it's growing more and more, it's something I really want to do and Arthur too. »

Padel Magazine : It's true that going to Spain would be a total change of life, what are you doing at the moment in your life? Do you have a job, are you a student?

Julien Seurin : “So this year I'm taking my DEJEPS tennis coaching diploma, it's work-study training that still takes me 35 hours a week. I wanted to condense it into 3 days, that means that I do my 35 hours in 3 days (Monday to Wednesday) and on those days the padel does not exist (laughs). We will say that I manage to train once or twice a week, Thursday and Friday and often go to tournaments on weekends. Obviously this year is a bit complicated with YouTube which takes up my time casually, that's why I want to give myself time next year. The more I play, the more I want to play. This sport is a bit crazy. And unfortunately I find that I don't play enough, I really want to train, I had some changes in my life which allow me to be a little free next year. Well, I don't really have any limits but the only problem is the financial aspect”