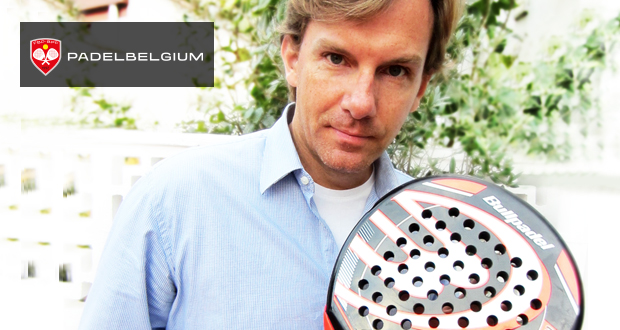 Padel Magazine - Alex Pavy (AP), Vice President of Padel Belgium, gave us a very interesting interview, allowing us to see that behind the French borders, the padel is also booming. He is also the Organizer of the event " Qualifying Round - Padel 2014 World Championship ».
PM - At the end of the month, Belgium will be at the center of padel world, can you tell us more about the event?

AP- For the first time in history, a qualifying phase is organized at a Padel World Championship. Belgium, which had already organized the European Championships in Waterloo in 1999, has been nominated and has been selected to organize this phase where 5 countries (Germany, Austria, Netherlands, United Kingdom, Belgium) will meet in Ghent, Belgium the 26, 27 and 28 September 2014. Thus, the 3 best countries will have access to the final phase that will take place in Palma de Mallorque at the end of October.

This event is above all an international competition where the best Padel players from each country will compete in one of the largest padel clubs in Europe (except Spain), Padel4U2, only dedicated to Padel and who owns 8 terrains (6 doubles and 2 simple).

For Padel Belgium (Belgian Federation of Padel) and Padel Vlaanderen (Flemish Association of Padel, co-organizer) this event is a great opportunity to publicize the Padel to the greatest number. We will also have the pleasure of welcoming Henri Leconte as “ambassador” who himself launches his concept “ padel »In France, and will offer a small exhibition (27/09 at 16:00 pm).

Anyone can come to see the matches?

Yes everyone is welcome. And the entrance is free.

How is the padel growing in Belgium?

We know a real craze since 2 or 3 years, as in France and Europe elsewhere. And the number of projects for 2015 reinforces our belief that this magical sport is really conquering athletes and the public.

I discovered Padel in 1994 when 2 courses were installed in my tennis club at that time, the Royal Amical Tennis Club in Brussels. I quickly hooked and from 1996 I had the opportunity to participate in Championships in Spain among others and discover the full extent of the sport. During the many years that followed, as a player, Padel brought me a lot of pleasure, satisfaction and beautiful human and sporting encounters. It is therefore natural that I wanted, in my turn, to "give" by investing myself otherwise in this sport. In 2008, Philippe Werts and I decided to take over the Belgian Federation to promote the Padel and give it all the place it deserves.

How many padel clubs are there in Belgium?

Currently, we have 5 clubs in Belgium for about 500 members. And beautiful projects in perspective ...

How does the padel run administratively in Belgium? Does the Belgian tennis federation get involved in the padel?

In many cases in Belgium, sports (Tennis, Squash, Badminton, Gym ... and Padel!) Are subdivided into two language wings. The role of Padel Belgium is then to ensure a national promotion, the international relations and to frame and harmonize the actions undertaken by the 2 associations: Padel Vlaanderen for the Dutch-speaking part of the country, and the Francophone Association of Padel (in progress creation) for the French speaking part of the country.

Which teams do you think are likely to participate in the finals of the World Championships? padel ?

It is very difficult to evaluate because these countries 5 have not really had the opportunity to confront for several years. There is more experience in some, more talent in others.

The common point seems to be a high athletic and tennis level in each team, with enormous motivation and enthusiasm to share.