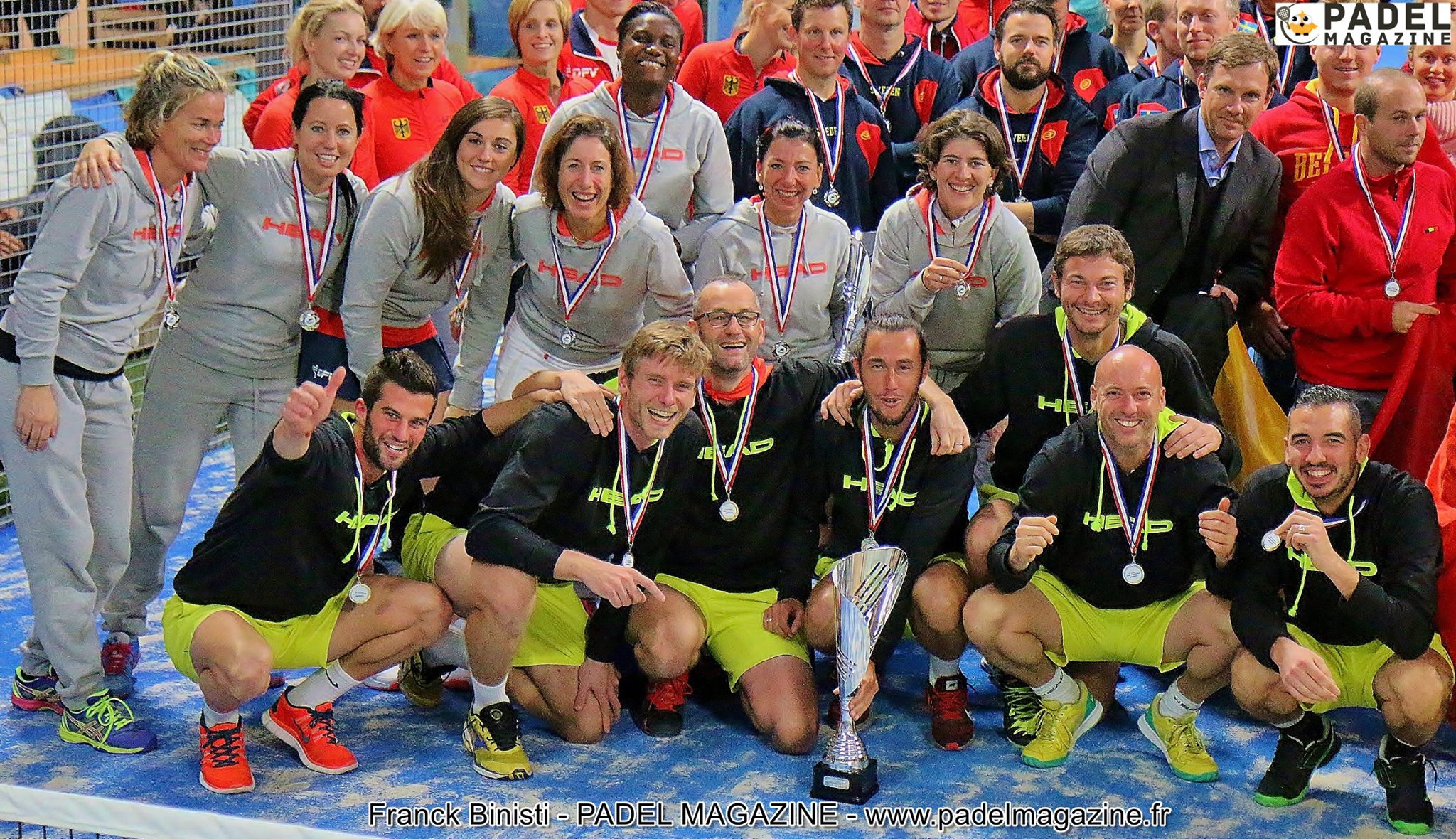 Back on the extraordinary adventure of padel French at the club "la Playa" located in The Hague in the Netherlands which hosted the European championships by national teams of Padel from 2 to 6 December.

Although convened late by the International Padel Federation (FIP), 9 nations were engaged, 16 teams (6 regular players and 1 replacing) formed the tournament board. Noteworthy absence of Spanish selections, against a backdrop of internal conflict between national and international federation. The best Portuguese male players could not be aligned for similar reasons.

In this championship of nations, each encounter is played at the best of 3 doubles games in two winning sets.

The absentees always being wrong, the team of France approached the competition in position of favorite for the final victory at the men and for the second place, behind untouchable Portuguese women.


In the men's draw, it was necessary to go through a positioning match against Italy to avoid a delicate quarter-final. Faced with strong and experienced opponents, the French victory was decided at the end of the third decisive match.

After big wins against Belgium and Italy by Sandrine Testud (formerly 10 WTA, injured in her first match) and despite a short defeat against Sweden, the women's team ranks at the top of her group thus avoiding the Portuguese ogre in the semifinals.

Double confrontation against the host country: Netherlands Vs France


For their first elimination match, the men's and women's teams were opposed to the Netherlands, the host country, logically supported by its public: the batavians made life hard for our champions! The boys got the victory in the quarterfinals thanks to a point obtained at the end of the third game, once again!

In the women's draw, it is a semi-final that is to be played and therefore a possibility of securing a medal now! The turning point of the game is from the first match which is won after a fight in 3 sets by the combative Emmelien LAMBREGTS and Line MEITES. The French champion pair Laura CLERGUE / Audrey CASANOVA then ensures the qualification in two dry sets. Sandy GODARD and Géraldine SOREL will complete the tricolor domination in the same way. The final will therefore pit them against the inevitable Portuguese who only give up a few games on the way to the Italians.

Final before the time: France Vs Belgium


On paper the Belgian team looks like a scarecrow: 3 former professional tennis players are aligned: the brothers Olivier and Christophe ROCHUS but also Laurent MONTOISY.

For the majority of observers, this men's semifinal opposes the two best selections of the competition, the show was also at the rendezvous.

It is therefore up to the French champion pair Jeremy SCATENA / Robin HAZIZA to equalize and keep the qualification hopes intact during the best match of these championships. It is the Belgians, who slightly oustsider, try a poker move which almost succeeded: Breaking their Belgian pair 1 and making play in match 2 a new Belgian pair: Laurent MONTOISY / Laurent JEUNIAUX.

The game began with difficulty for the French with the loss of the first set 7/6. At this point, France is one set from the exit. The uncertainty persists but the French equalize with one set everywhere. The third set is played in a tense atmosphere with the encouragement of both camps creating an atmosphere worthy of the Davis Cup! The two pairs surrender blows for blows and we have to wait for the tie-break in the 3rd set to decide between the two teams. The Belgians pass 3 points from the final, Jeremy and Robin finally win 7 points to 5. (4 / 6-6 / 1-7 / 6)

For the third consecutive time, the game was going to be decided in the third decisive game, and the experienced Alexis SALLES and Cédric CARITE claim their superiority and win in two sets (6 / 2-6 / 4) on Alec WITMEUR / Christophe ROCHUS .

Note that in the other part of the table, Sweden creates the surprise by beating the German selection.

By placing his two selections in the final, France won the 1 nation number 2015 championships, without question, this is a great first for the French paddle. In big competitors, our finalists teams have two European titles within reach of racket!

In the women's final, the French selection, exclusively composed of amateur players, faces Portugal, which has several players ranked on the WPT (World Padel Tour) and in particular the 15ème player world.

Despite their unwavering will and combativeness, and parties where the Portuguese will have to use all their talent, the gap is too big. Without having to blush, the French bow 3 points to 0. They will nevertheless be able to proudly review their journey leading them to the Silver medal!

On the men's side, we start as favorites, but France decides to ensure their rear by placing their pair n ° 3 in match 1. Conclusion: The men's final also begins with a defeat. Undoubtedly overtaken by the pressure and the stake of the event, Jérôme FERRANDEZ and Simon DESLIENS, in spite of a great combativeness, fall on a Swedish pair 1 very complicated to play. Our French pair therefore inclines 6/0 - 6/4. Note that this experimental pair made up of the two youngest players of the team is aligned due to the package of Laurent BOULADE. There is no doubt that this defeat, due to the lack of automation, will be useful to everyone during the next campaigns to consolidate their experience.

The incipient fire, the firefighters on duty, Jeremy SCATENA and Robin HAZIZA once again had to equalize with authority and talent, in two dry sets (6 / 4-6 / 2). As Rob aka "The Expert's Paw" distilled his murderous balls across the width of the pitch, the smash dealer had arrived on the morning of the final for Scat. He therefore did not hesitate to send missiles in smashes in all positions. Sweden surrendered in 2 sets and allow France to return to 1 match everywhere.

For the third game, decisive for the title, Cédric CARITE and the captain / player of the selection Alexis SALLES return to track more motivated than ever and play to perfection.

The pair walk on water, missing next to nothing. The French strategy is simple: No fault! And that is a house specialty of our French. The long exchanges at the start of the match blew up the Swedish opponents and bow 6/2 6/2, the case was completed in less than an hour.

France is European Champion of padel by team for the first time in its history!

Only small shadow on the board, "it is the lack of logistical and financial support of the FFT for the French teams"We explain the French players unanimously, who had to"look for a sponsor (HEAD) to take some of the costs and equip them".