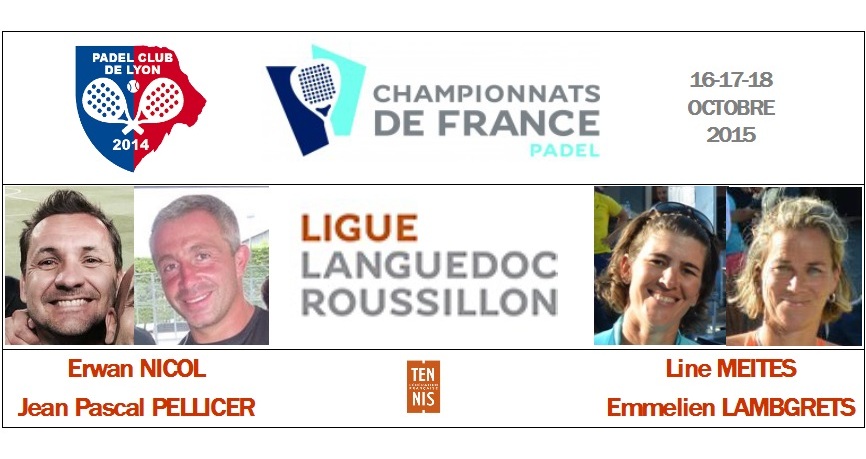 Jérôme Bécasset and Jean-Marc Herard will carry out a daily zoom on a league and its representatives for the French padel championships in Padel Lyon Club (Padel Central). The Languedoc Rousillon league is under siege.

Line MEITES (LM): Tennis player since very young, I stopped several years before taking the racket towards 23 years ... I spent my BE 1er then 2eme degree in Grenoble. I teach in Toulouse since 2015, after a few years spent in Perpignan.

Emmelien LAMBREGTS (EL): I have been playing tennis for a few years now, soon 38, regularly and regularly, some interruptions due to pregnancy, others to injuries. Classified 4 / 6.

LM: I had the chance to discover this sport there are about 15 years, in Nice, then during 10 years I did not see or had access to the padel fields until a summer animation of discovery and initiation, in St Cyprien. The following year, the TC Mas built a field for my greatest pleasure!

LM: It's 3ans that I play regularly padel with different partners men or women ... as my schedule actually allows !! I want to confront players more often, because few girls play for now. We are often forced to play with boys; I think the game is different between girls!

EL: I left the tennis for the benefit of the padel, which is in my eyes, a sport very playful, friendly and accessible to a wide audience!

LM: We started together ... naturally because we already play together as a team in tennis, unfortunately opportunities to train together are rare.

EL: With Line we started doing local tournaments together from the beginning, we benefit from our experience in tennis team matches; and anyway, it's the best!

LM: There were only 3 teams registered ... including a novice team. It's a shame, we hope to meet more opposition next year.

EL: The qualifications were spent on a day at the Grand Stade in Saint-Cyprien
7 / Ambitions and prognosis for the finals

LM: Go as far as possible of course !! Bring the cup back 🙂

In the longer term I would like to have the chance to train and progress to participate in international tournaments! I know very few girls for the moment in the padel ... and I fear everyone because I know there is much stronger than us.

EL: For these final stages, we hope to go as far as possible and above all to have fun! Personally I do not know the other teams because it is the 1er time I do a tournament outside the league Languedoc-Roussillon, I usually do tournaments / matches team on the other side of the border , in Spain.

Jean Pascal PELLICER (JPC): Unlike many padel players, my tennis career is almost non-existent since I come from rugby and skiing. In rugby I was selected in the national team, at the junior level, when I was playing at USAP. In alpine skiing, regional champion multiple times and 4ème in the championship of France junior in slalom and downhill.

Erwan NICOL (EN): Young I practiced tennis and ping-pong and then went to volleyball, which I practiced at a professional level. I then took the tennis and started the padel, in 2013.

JPC: 3 years ago now going to play a game of Squash at the tennis club of the Mas de Perpignan.

EN: I discovered the padel thanks to my club which is deeply invested in this sport, two years ago in Perpignan

JPC: I became "addicted" to the padel, I play almost every day (never more than 3h). Perspective: improve obviously and especially take pleasure to beat the Catalans of the south.

EN: My place is that of a person who takes pleasure first and wants to progress little by little.

JPC: In the splendid Mas club in Perpignan

JPC: We started almost at the same time the padel, we do not play all the tournaments together because we try to mix the teams, and to evolve with other players.

Why him ? simply because he's a good guy and he's very, very hard! I prefer to have him as a teammate rather than as an opponent.

EN: JP is not my usual partner, but he is a really nice person with whom I always spend a good time, in addition to being a passionate and successful player.

JPC: On a day, everything went well for us, in the final we had a balanced match against 2 Kevin, whom I greet in passing. Here we are in Lyon. I just regret that my friend Alsina could not qualify.

EN: Nothing to report, everything went pretty well.

JPC: We are competitors with Erwan, we come to Lyon to honor our beautiful region. We know some opponents obviously, there are very good players, Carity / Halls for example.

EN: To have fun and evolve against players from elsewhere. I know very few players.

JPC: Take care not to take a ball from Erwan in the buttocks: it stings!

EN: That the best wins