Bastien Blanqué, associated with Marcello Jardim, will be the only Frenchman present tomorrow morning in the preprevia final of the WPT Cupra Las Rozas Open.

This morning, only Johan Bergeron and Victor Mena Gil won in the first round of preprevia. Jérémy Scatena and Benjamin Tison fought a big fight against José Luis Gonzalez Rodríguez and Alvaro Melendez Amaya, who finally switched to the side of the opponents: 7/5 4/6 3/6. Loïc Le Panse and Nicolas Trancart also had a difficult morning, against Luis Ortega Pérez and Jaime Fermosell Delgado: 1 / 6 4 / 6.

This afternoon, a totally unusual situation took place in the opposition between Bergeron / Mena Gil et Jose Jimenez Casas / Carlos Marti Vaño. In a very hot match marked by many disputes, the referee disqualified both teams following a scuffle.

After having glued to a set everywhere (4/6 6/4), Bergeron and Mena Gil are insulted while in their chair, Jo's partner gets up and finds himself head to head with Carlos Marti Vaño, which leads to the disqualification of both pairs.

Questioned by us, Johan Bergeron tells us his version of the facts : “They tried to steal points from us early in the game, insulted us. I find it a shame that the referee did not come forward earlier in the match to put an end to their unacceptable behavior… ”

Very disappointed, here is the story that the French champion published following the match on Instagram : 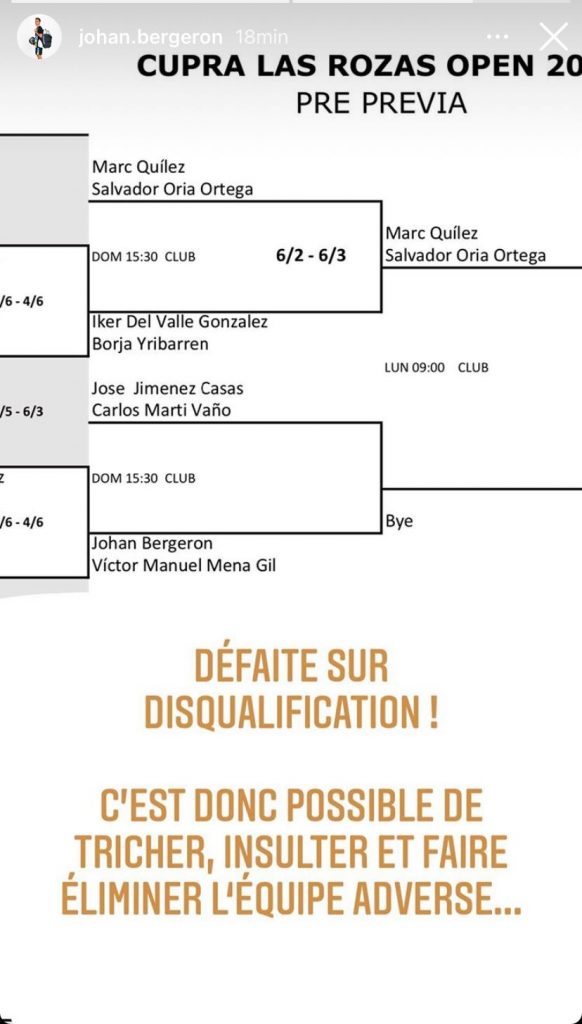 Fortunately for the French delegation, Bastien Blanqué and Marcello Jardim, in their second game together, managed to overcome young Pablo García Rodrigo and veteran Raúl Díaz (39). A snatch victory 7/5 2/7 7/6.

A victory that allows them to play in the preprevia final tomorrow morning, at 09h00Facing Diego Gil Batista (132) and Francisco Jurado Sosa (108) ! A big match in perspective!