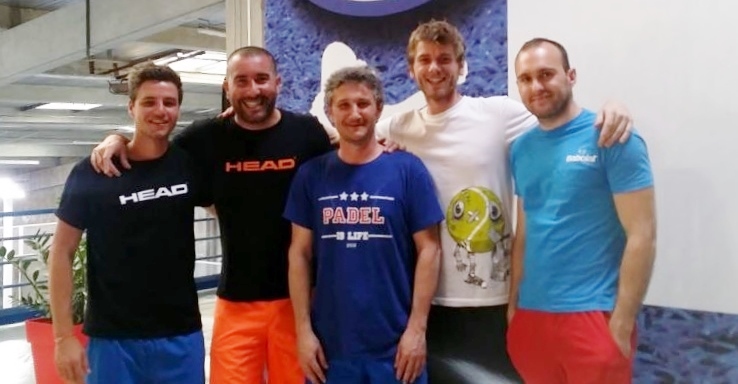 No, none of that, the major event in the world of Padel this weekend was the organization of the first FFT approved tournament in Lyon! Or almost….

Nonetheless, bringing together in barely 15 days over an extended weekend, 16 pairs of FFT licensees on a day of the Tennis team championship, this is a real feat. But above all, this testifies to the great vitality of the Padel French in general with the opening of centers everywhere and Padel Lyonnais in particular. And also a little of the force of persuasion to see of insistence and harassment of the leaders of the Padel Club de Lyon, your stubborn servant in the lead ...

Nevertheless, it is indeed 32 players, young and old, competitors or simple enthusiasts who faced each other for two days on the slopes of Padel Central Lyon. Pala in hand to send a few pralines (without moderation!) First, a few beers (in moderation) and peanuts at the club house then….

Pierre-Etienne MORILLON and Johan BERGERON still at the top

On the sports side, in the region, the padel is a sport that is played at 2 against 2 and where Pierre-Etienne MORILLON and Johan BERGERON always win at the end. Once again the adage was verified but not without difficulty and especially after beautiful parties and some surprises both in chickens than in the final table.

In Pool A, if the number 1 seed and future winners wandered, it was not the same for the boss of the center Laurent BERIARD associated with Arnaud "El mytho" CHAFFANJON finally 3ème in favor of Fabien NADAU and Guillaume THIEBAUT who reach the final painting. Such a commercial gesture on the part of Laurent BERIARD even if he is never stingy, is to salute!

In Pool B, 2 number two seed Thibaut PERREON and Gregory JULLIEN first disappointed their fans by finishing 3emes and then the organizers by not playing the league games on Sunday. Yet the pool was closed .... "Viva" MIHAJLOVIC and his son Martin, who progress on each outing, take advantage of the windfall to reach the quarter-final behind the "Harlem" Globetrotters "Of the padel: Jean Luc CONTRERAS and Javier DUGONI.

In Pool C, perhaps the most compact in terms of level of play, it was Simon DESLIENS and Pierre C. who beat Fabien LAGUNA and Frederick BAGNARD on the final tie-break and Loïc GIACOMAZZO Martin LIAM who were able to measure all the way still to go to justify an excellent tennis ranking on a track of Padel.

In Pool D, the first two places were promised to multiple champions Poitevins Alexandre LERUSTE and Jérôme BOEUF and to the local pair Serge REISINGER Jérôme "poquito" BECASSET. But perhaps not in that order since during a very close game played on a few points at the end of the games (format no-ad requires) it is the second named who win and preserve a quarterfinal more affordable….

The quarter-final display between tennis-styled Poitevins and the most South American pair of local club 100% padel turns to the advantage of the latter, who will in turn fall on stronger than themselves in the semi-finals. At the top of the table, cruising speed for Pierre-Etienne MORILLON Johan BERGERON until the victory. The only thing that could have deprived them of the title would have been to be eliminated for late ignition but Pierre-Etienne, umpire of the tournament was magnanimous with himself!

Still note the final point of the match for the third place where after two sets fiercely between exhausted quadras, Javier DUGONI will inadvertently choose the wrong side to give victory to his opponents. Indeed, once at the club house, between two beers, during the draw, the peanut was not in the right hand of Serge REISINGER but in the left: Game set and match!

In the complementary table, this time the boss will not leave anyone the opportunity to take advantage of his commercial largesse. In the final, however, deserving Thomas MAURAND and Sebastian LAJARA will even make the short way between the tracks and the bicycle locker room ....

In the end, “peanuts in the land of pralines” is a nice summary of this weekend made up of meetings, friendships and conviviality. All the essence of this fabulous sport that is Padel ! We do it again from June 13-14 for the Lyonnais league championships!