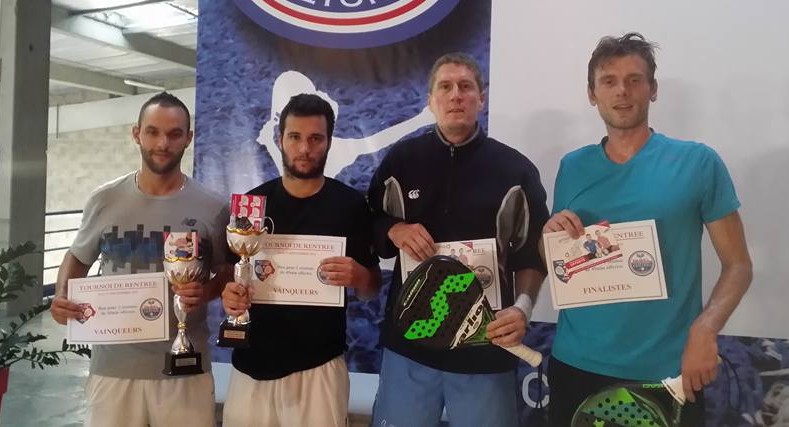 Imagine yourself on the scene of the latest fashionable musical, surrounded by artists, just before the curtain rises…

What better point of view to enjoy the show you will tell me? And you will be right, but when it is your turn to give the reply, sing and dance like all these talented people around you, it may get complicated!

Well here is a glimpse of what I felt when I started the second FFT approved tournament staged by the Padel Club of Lyon on one of the most beautiful French padel stages in Padel Central Lyon on September 26 and 27 latest.

The casting : "All the guys except…"

Regarding the cast, apart from the now N ° 423 ranking Johan BERGERON WPT / Pierre Étienne MORILLON, all the stars of Padel Rhône-Alpin were present.

If the recent winners of the impeccable Rilleux tournament Justin LOPES / François AUTHIER and League champions Simon DESLIENS and Serge REISINGER target the leading roles, relegating to the rank of second knife Arnaud TABONI and Roman DUBOST CHAVIER would be a mistake.

For my part, a simple extra, in the company of my teammate Pierre-Laurent CHANAL, like a Jean Pascal integrating the Star-Ac without knowing how to sing or dance, our objective during this tournament is above all to have fun and avoid the flop every game!

The density of the painting

Given the density of the table, the group matches of the first day were more than a dress rehearsal.

Indeed, if protected by their ranking tennis, the first two seeded LOPES / AUTHIER and TABONI / CHAVIER should enter only during the quarterfinals on Sunday; all the other pairs to win their place under the sunlight in a pool match (two hens of 5).

4 pairs were eliminated and forgot their dreams of glory on Saturday.

Finally rather three, because here, no public vote to fish me, the intruder in the voice of rattle, darling of the housewife under 50 years. In addition my housewife is not even 40 years old .... (My darling if you read me I kiss you ...).

In Pool A, REISINGER / DESLIENS deliver a recital without false notes and logically end in mind.

Behind, we find the Grenoblois Clément ARCANGELI / Fabrice CHAIX and local BOUAZIZ / LAGUNA who will return Sunday on the big stage for the quarter finals.

The deserving Jérôme XAMBEU / Thomas CLEMENT will have to be satisfied to return to make their scales in complementary table, for only one small game of difference in the classification.

A note in this same table, the absence of Josselyn COLOMBET / Samuel RICCI yet come to learn

In Pool B, David MIOTTO / Jean Yves LEVRAT's first role ahead of LERUSTE / BOEUF and Olivier CARLIER / Mathieu HORTEUR who have struggled to justify their number-one box 4.

As expected, Thibault PERREON / Benoît TORCK and CHANAL / BECASSET take advantage of a unique point of view on the show and see the balls fuse and the points, games and matches parade.

On Sunday, in the first part, the pair XAMBEU / CLEMENT ranks 9ème.

On the side of the main draw, no surprises for the quarter and semifinals.

The finalists provide the show, in a match as spectacular as tight.

In the first act (6-2) the regularity of the LOPES / AUTHIER duo surpasses the aggressiveness of DESLIENS / REISINGER, strongly applauded by the public during the second round won 6-3.

In the third and last set, the scenario tinged with dramaturgy and suspense leads to a happy-end (7-5) for Justin LOPES and François AUTHIER who thus win their second tournament in two weeks!

If there is a need for further proof of the sportsmanship and altruistic spirit that reigns in our discipline, let us note the gesture of Serge REISINGER, who, on the match point of the final gives a foul his volley, being the only one to having seen his ball brush against the fence. Hats off sir!

Direction of the French paddle championships

See you all fans of padel, lovers of beautiful pieces and great numbers, on October 16, 17 and 18 for the first "Oscars" of the padel French, FFT era.