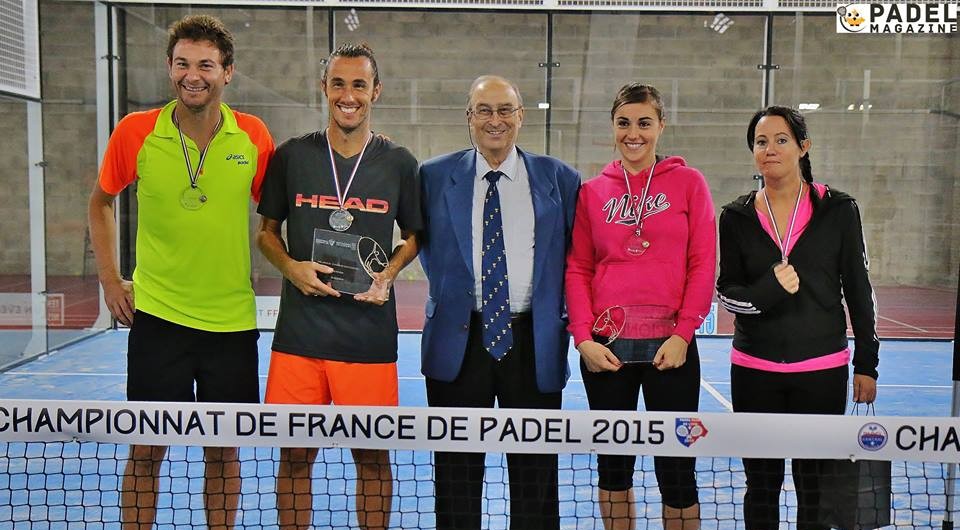 The Provence (Clergue / Casanova) and Côte d'Azur (Haziza / Scatena) leagues win the titles of French champions of padel 2015. While most observers believe that there is no surprise to see these two leagues at the top of the bill, it took a lot of self-sacrifice to see it through. Back on these 3 very sporty days ...

Complicated chicken phases for some pairs

The first French paddle championships of the FFT era that took place at the Padel Club Lyon kept all their promises and this from the group stage, where it was observed that the leagues of the north were not in remains with such teams as the League of Flanders or Pays de Loire League that could be very dangerous. 15 Pairs Men and 10 Pairs Women were qualified for these final stages. Only, the pair Pays de la Loire woman will miss the call.

In Pool A, 1 team was untouchable: Ferrandez / Boulade (Provence League) that will not allow any of the other pairs in the pool to make them doubt. The second and third places, however, are very much coveted by the league CBBL, Flanders and Val d'Oise. These 3 pairs will finish the group stages with 2 wins and 2 defeats. The pair that will pay the price is the Val d'Oise.

The chicken B is certainly the hen of death with the ranks Scatena / Haziza (Côte d'Azur) and Salles / Carité (Midi-Pyérénes) who logically win the first two places while the Lyonnaise league failed to get the ticket for quarters.

The chicken C seemed a little more homogeneous. Samuel Devrand and Simon Boissé (Pays de la Loire League) have everyone agree by winning all their matches without much resistance.

In women, it will especially be necessary to wait for the semi-finals to see the Languedoc Roussillon League to pose big problems to the league Provence. But we will come back to it a little later.

The final Phases: The two big semi-finals Provence vs Midi-Pyrénées and Languedoc vs Provence

In women, a pair could have made a big shot: Languedoc Roussillon with the levers Lines Meites and Emmeline Lambregts against the favorites of the tournament Laura Clergue and Audrey Casanova. The perpignanaises will finally lose in 2 sets (6 / 0 7 / 6)

In the final, we logically meet with the Côte d'Azur league (Sandy Godard and Géraldine Sorel) and the Côte de Provence league. Match played with Géraldine Sorel very enterprising and Sandy Godard who holds well in defense. But in front, it's a small step up in all areas. After losing the first set 6 / 4, the league Côte d'Azur could have made up for the tie-break in the second set, but Laura and Audrey hold on. They become the champions of France padel 2015.

The league of Val d'Oise (Sabrina Rioja and Monica Blankson-Hemans finished 4th. It's a very good performance and not necessarily expected.


At men's, there are several complicated matches that could have turned in favor of the underdogs in the quarter-finals.

The other match that could have turned concerns the confrontation between the Midi-Pyrénées league (Cédric Carité and Alexis Salles) and the Languedoc Rousillon league (Jean Pascal Pellicer and Erwan Nicol). Since in the game, the Midi-Pyrénées league was better than the LR league, JP Pellicier decides to play suicide bombers by sticking the net on opposing smashes while Erwan Nicol sends warheads in smashes. It's a lost poker shot, but it didn't go far from the second set tie-break. (6/0 7/6)

In the semifinal, Patrick Fouquet former DTN of the former French Padel Federation and belonging to the huge league Côte d'Azur, do not get it wrong on the forums: "A half not to miss". On paper it's 50 / 50. Difficult to predict a winner. It was finally the Provence league that won after being led in the super tie-break 5 / 8 to finally win 10 / 8.

In the final, the walk is too high for the Ferrandez / Boulade pair (Provence league). Opposite, the favorites of the tournament Haziza / Scatena (League Côte d'Azur) practice undoubtedly their best match of the tournament. And the first point of the match gives the "LA". (See the video of the match).

Appointment to the European Championships next December, to see if our French transform the test.