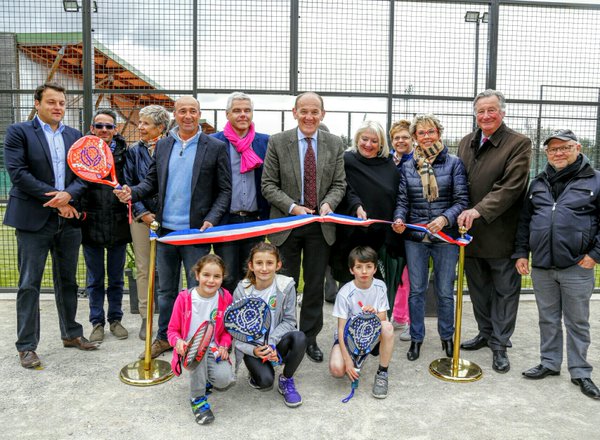 Zoom on the day of the 23 April 2016, date of the inauguration of the padel courts of Le Touquet Paris Plage.

Already with an impressive structure comprising 25 outdoor clay courts, 8 indoor courts with 5 hard and 3 carpets, and an outdoor heated swimming pool of 25m x 12m, the tennis club of Le Touquet has embarked on the adventure padel.

With the support of the town hall and partners, they built 2 outdoor padel courts, in the continuity of the beaten lands.

According to the tremendous potential of this club, and the return of Benjamin Capelain, director of the complex, "this is just the beginning of the padel adventure"...

« last weekend, the 2 fields were full from morning to night! Slipped the director.

The town hall then asked the FRANCE structure PADEL PRO to do a demonstration and initiation padel. The team consisted of 2 pairs Thomas Delion / Johan Romanowski, and Florian Landsheere / Maxime Lecomte.

The FRANCE PADEL PRO team has not stopped playing with children and parents present, but also with local elected officials, including the Mayor of Touquet, Daniel Fasquelle.

Some children had already understood everything about the return of the wall!

The padel "to revive tennis"

This is an investment of 100 000 €. This investment must help stop the decline in the number of tennis players. The resort director explains that " With padel, we speak to more people because simpler and more accessible ».

For all lovers of padel and those who want to discover the activity, a visit to the tennis club in Le Touquet is now inevitable when you go to the coast!