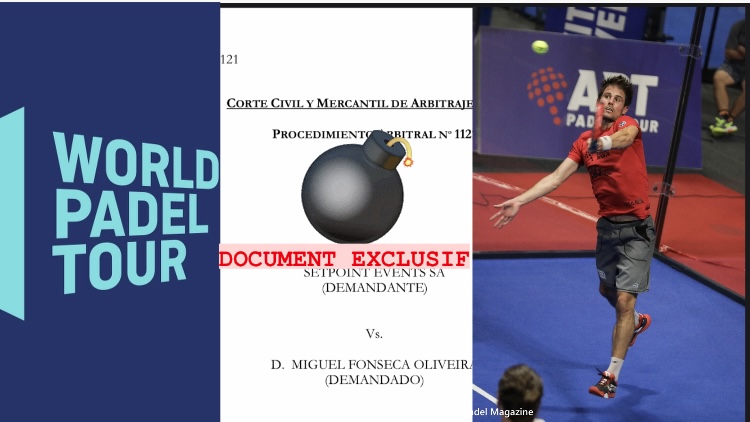 Padel Magazine has obtained the document that will change the situation in the legal battle between professional players and the WPT. Miguel Oliveira will not have to pay the amount requested by Setpoint Events.

According to World Padel Tour, Miguel Oliveira had not participated in the events of the circuit without justified cause. The rule is clear in this famous contract: the player owes all the prize-money he received in his career multiplied by two.

"Order of the player Mr. Miguel Fonseca Oliveira to indemnify Setpoint Evenst SA up to the double the amount of prizes received by the player during his period of participation in the WPT, which currently amounts to 23 662,08 euros, plus interest, in accordance with Art. 5.3 of the contract.”

Faced with this, Miguel Oliveira claimed €3.087,50 which had not been paid to him at the start of 2021 when the circuit realized that the Portuguese was joining the APT. Padel Tour.

A defeat for the WPT

Le CORTE CIVIL Y MERCANTIL DE ARBITRAJE (CIMA), which is the competent arbitration court for this dispute, delivered its award on Wednesday April 27. Both requests are rejected.

Even if Miguel Oliveira will not receive the 3 euros that the WPT owed him, he will not have to reimburse his prize-money twice!

You can read the sentence below:

"In view of the foregoing, and in order to resolve the dispute submitted to it in accordance with the law
the SOLE ARBITRATOR hereby rules:
1) Reject the request made by SET POINT EVENTS SA against Mr. Miguel Fonseca Oliveira is rejected.
2) Reject the counterclaim made by Mr. Miguel Fonseca Oliveira against SET POINT EVENTS SA.
3) In view of the rejection of the two requests, there is no need to rule specifically on the expenses, each party having to pay the expenses incurred in its own instance and the common expenses in half.

4) Expressly acknowledge the claim of SET POINT EVENTS SA against Mr. Miguel Fonseca Oliveira for the amount of the advance on costs paid by the claimant to cover the amount of the arbitration transaction which corresponds to the defendant . The amount of this claim will be certified by the CIMA Secretary at the time of settlement."

A history of ASF?

This sentence seems capital for the legal war between the players of padel professionals and the World Padel Tour. A competent court has ruled against the clause of the contract that all players feared until then, thus creating a legal history for the defense of future players attacked by the WPT.

Even if it will be necessary to await the sentences of the other lawsuits of the WPT against the other players, we can think that the latter will not have to pay large fines to the WPT if they decide not to respect their contract.

If the Oliveira case sets precedent, we can say that players therefore no longer risk much in their battle with the WPT. In the 2022 season which is that of launch of Premier Padel and expansion of the APT Padel Tour, we can even wonder if the WPT players will continue to play on the circuit that is suing them.

We will see in the coming weeks what the reaction of the players will be, but this sentence weakens the posture of the World Padel Tour, which pitches more than ever.