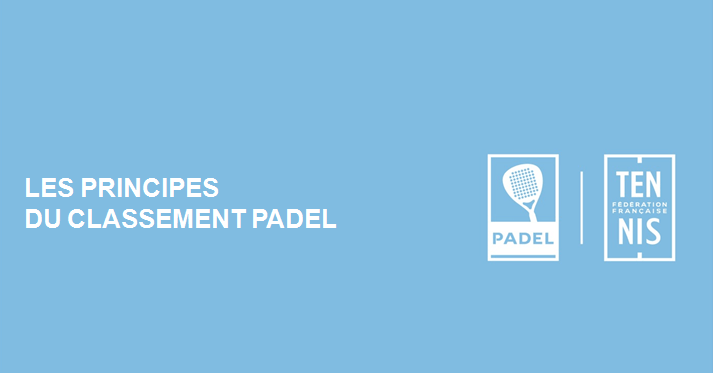 Attention: the tests mixed are not taken into account in the ranking calculation.

For each player, the best 6 tournaments or championships played during the sports year will be taken into account.

The ranking is individual. This is a rank of 1 to N.

Calculating the weight of a pair

To calculate the weight of a team, it is necessary to add the rankings of Padel of the 2 players composing the team.

A player Unclassified Padel will have a ranking equal to the rank of the last player of the French ranking + 1. So the lower the weight of the team, the stronger the team.

We must add the ranks (rankings) and not the points of each player.

In case of equal weight, the Referee is free to nominate the strongest team.

Caution : if a foreign player is not ranked in the Padel in France (or has a very low ranking but has a very good international ranking - Ranking FIP - International Padel Federation), a ranking assimilation can then be delivered to this player, reflecting at best his level of play. In this case, thank you to get closer to the Competition Management - sberrafato@fft.fr

Padel tournaments FFT 2017 will count towards 2018 ranking (Tournaments ending on Sunday 1er October 2017 at the latest).

Starting with the 2018 sports year, Padel FFT's ranking will be a rolling 12 * ranking, which will take into account the best tournaments / championships played, for each player, during the last 12 months.

(* This ranking will be published monthly, subject to the delivery of the federal computer application on time).

For this 2017 sports year, and pending the feedback of results, the sliding ranking will be published every quarters and will count tournaments with an end date of at most the last day of the preceding month.

The first sliding ranking will be calculated for the month of January 2017, and will be published on the FFT website - Padel topic - on Monday 16 January.