La Center-Val de Loire Tennis League is the first Ligue de France to invest in the creation of an indoor structure within its complex in Blois.

The Center-Val de Loire tennis league wishes to make the practice accessible to all padel. Emphasis is placed on the training of players and supervisors, on the development of this activity among all audiences (schools, businesses, non-tennis licensees, clinics, etc.) and finally on the harmonization of competition calendars and usual good practices between authorized structures and associations.

In an indoor structure entirely dedicated to practice, three courts are available. You will also find on site access for People with Reduced Mobility, changing rooms and showers, lockers for your personal effects, as well as a very close car park.

The Loire valley Padel organize a tournament Head Padel Open per month. It is also possible to privatize the structure or organize your afterwork. 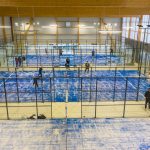