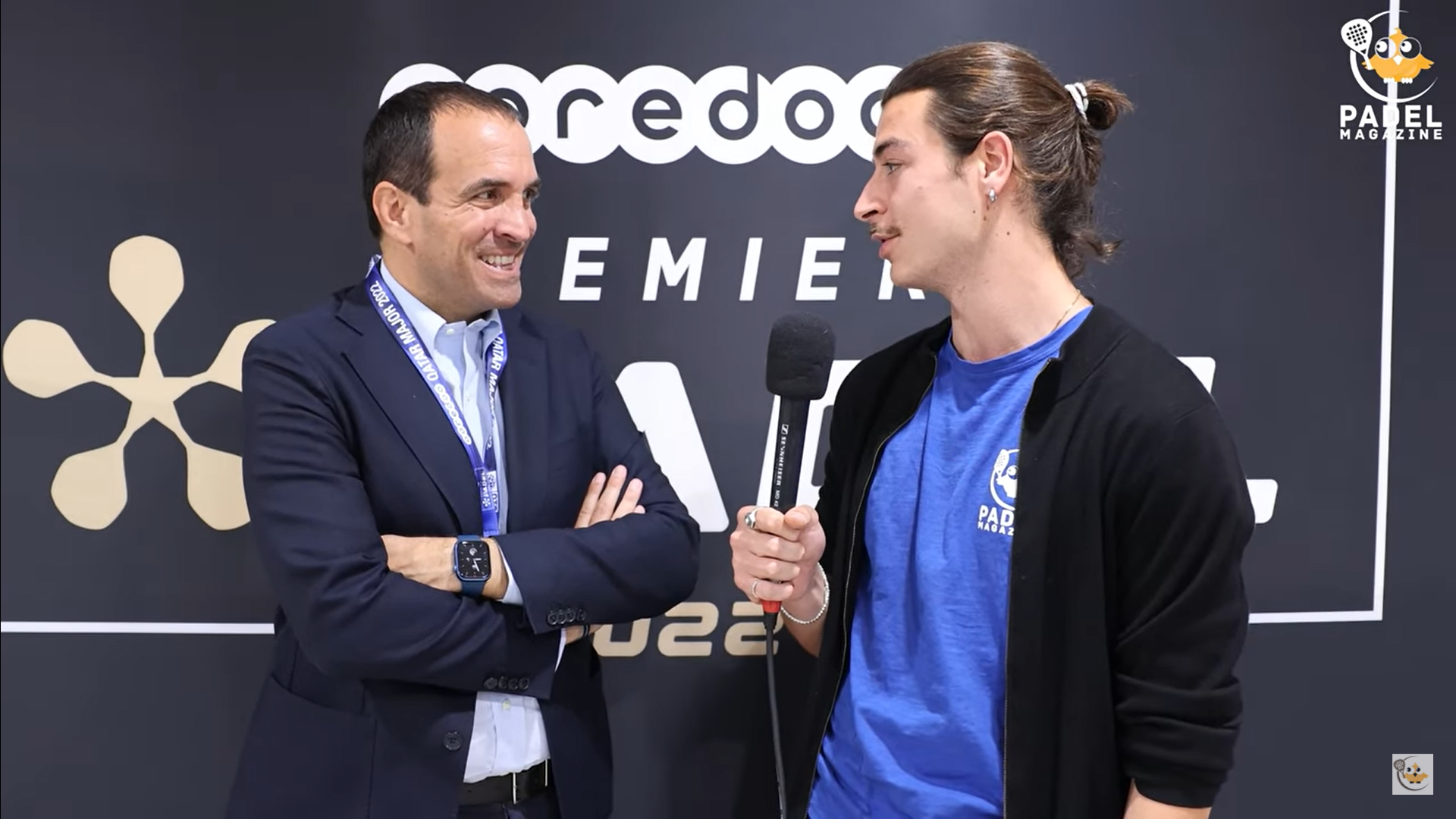 Present in Doha during the Premier Padel, the president of the FIP, Luigi Carraro, gave us his point of view on the senior world championships, the situation with the WPT and on this first edition of the Premier Padel.

Padel Magazine : You have just come back from a very long trip, and from the senior world championships in Las Vegas. How is it going there?

Luigi Carraro: « It really is a fantastic experience. This is the first time that an event of such importance has been held in the USA. Our objective in 2022 revolved around two main countries: the USA and, in Europe, France. These are the two countries that should bring us the most satisfaction.

What I saw at senior world championships was magnificent: more than 450 athletes from 19 countries, an extraordinary atmosphere and seeing that the USA was beginning to take an interest in padel was a very nice surprise. This gives us even more motivation to invest more in this sport and make it a more global sport.

Compared to France, yesterday they managed to take a point from Spain. France have a very good team, and what they are demonstrating on the pitch is fabulous. I think France is a leading country in all sports in general. The new team of the French Federation has bet a lot on the padel, and I am sure that France will be one of the main protagonists in the coming years of the padel. "

Le Premier Padel : “the circuit of padel, athletes and everyone “

Padel Magazine : We are here in Doha, in Premier Padel which is finally a reality. Is the padel entering a new era?

The greatest satisfaction is to see the faces of the players who are happy, moved and that is a motivation to continue in this direction and do even better. »

Padel Magazine : The International Federation was with the World Padel Tour, what happened to make the FIP want to break off its contact with the WPT?

Luigi Carraro : “We haven't broken contact with anyone. We have an idea of ​​sport, and we think that sport should be managed by the International Federation and by the national federations. Our project is an open project, it has two characteristics: openness and freedom. Freedom for the players, which is fundamental for us because they are the main players. And the openness at the organizational level: for all the organizers who want to organize competitions of Premier Padel, the doors are open.

We have a duty to create the rules and the conditions, but our doors are open to everyone. And I am convinced that little by little, we will succeed in bringing in all the organizers who want the good of the padel. "

Padel Magazine : We know that there are other circuits that work very well: the WPT but also the APT Padel tower. Do you see the possibility that the APT and the FIP could join? Or that certain organizers of the APT can organize stages with the FIP?

Luigi Carraro: “As I told you before, this circuit is an open circuit. I think there are a lot of people who have invested in this sport, because they love it. There may have been quarrels in the past, but this project is there for the good of our sport.

Padel Magazine : For organizers who would like to organize a Premier Padel, what will be the specifications for it to work?

Luigi Carraro: "The doors are open, there are 3 big institutions in this project: the FIP, the players' association and there is a business partner who is the best we have met on our way: Qatar Sports Investment . They have one thing that really touched me, it's the institutional spirit and the sportsmanship they have. With the players we chose this partner because they have an interesting economic and financial strength, but also because they share the same values ​​as us vis-à-vis athletes and freedom. »

Padel Magazine : The players are delighted, but the only downside is that there is no calendar yet. When Premier Padel will be able to reveal a schedule? Or will it be date by date?

Luigi Carraro: “We have already organized everything in a very short time, we necessarily had to limit the quantity (of tournaments) by focusing more on quality. We will have 10 events of very high quality normally. There will be many surprises, and all we can say to people is to be patient and wait for the announcements of the events which will be important and ambitious with always the idea of ​​becoming one of the main sports in the world. world "

Padel Magazine : We have Benjamin Tison who managed to take a set from Lebron and Galan, Windahl who fought well against the number 1s as well. How does it feel to see that French and Swedes are now almost at the same level as Spaniards or Argentines? Because in the past we could hear criticisms concerning the fact that the sport is centered only around these nations.

Luigi Carraro: “That's what we wanted and what we want. I think the Cupra FIP tour has a lot to do with it because these players had the opportunity to play around the world, to earn points and to have more visibility. That's our goal. Spain continues to be the center of this sport, because today if a player wants to become a great player, he has to go through Spain. In other sports it is not like that. Our idea is to create a global sport, which gives the possibility, no matter where you are in the world, to be able to train and reach the best possible level.

The players have a difficult life, they have to travel a lot and have a short, limited professional life.

Some of your colleagues have asked me why start right away? Well because you have to. Because the players deserve it. Because waiting two or three years would mean losing 30% of their post-sports career for them. We have a responsibility towards these athletes: they deserve to have a service, an organization, feedback and visibility like the ones they are having here. »

“Whatever is valid and legal in the contracts, the players will respect it”

Padel Magazine : Last question, how do you value the risk that these players are taking compared to the World Padel Tour ? We are talking about fines of 25 million euros, what is your view of the situation?

Luigi Carraro . " I don't want to comment on what other people are doing. What I can tell you for sure is that the players are serious people and that they respect the contracts in the legal parts. The correct things in the contracts, the players will respect them. However, if there are things that are against the law, players should think about their lives and their families. Sincerely the padel deserves to be a free sport for athletes and open for organizers and fans.

I do not want to comment on contracts that I do not know, the people dedicated to this have analyzed this contract. The players have an association which is very well structured from a sporting and legal point of view. The only thing I can tell you is that whatever is valid in the contracts the players will respect it. »

The interview can be found here: