What tournament! What showcase! At the Set Club in Aix-en-Provence, Jean-Marc Lenoir, the manager of the club, has set the table with certainly the most side of the French tournaments in number of participants and levels: The International Tournament Padel Aachen in Provence.

It has been held every year for the last ten years and has become the unmissable rendezvous of the French padel.

Spain, Portugal, Italy, Brazil, Argentina, Monaco and players from all over France came to participate in this big tournament and it is Spain and Brazil who emerged victorious. 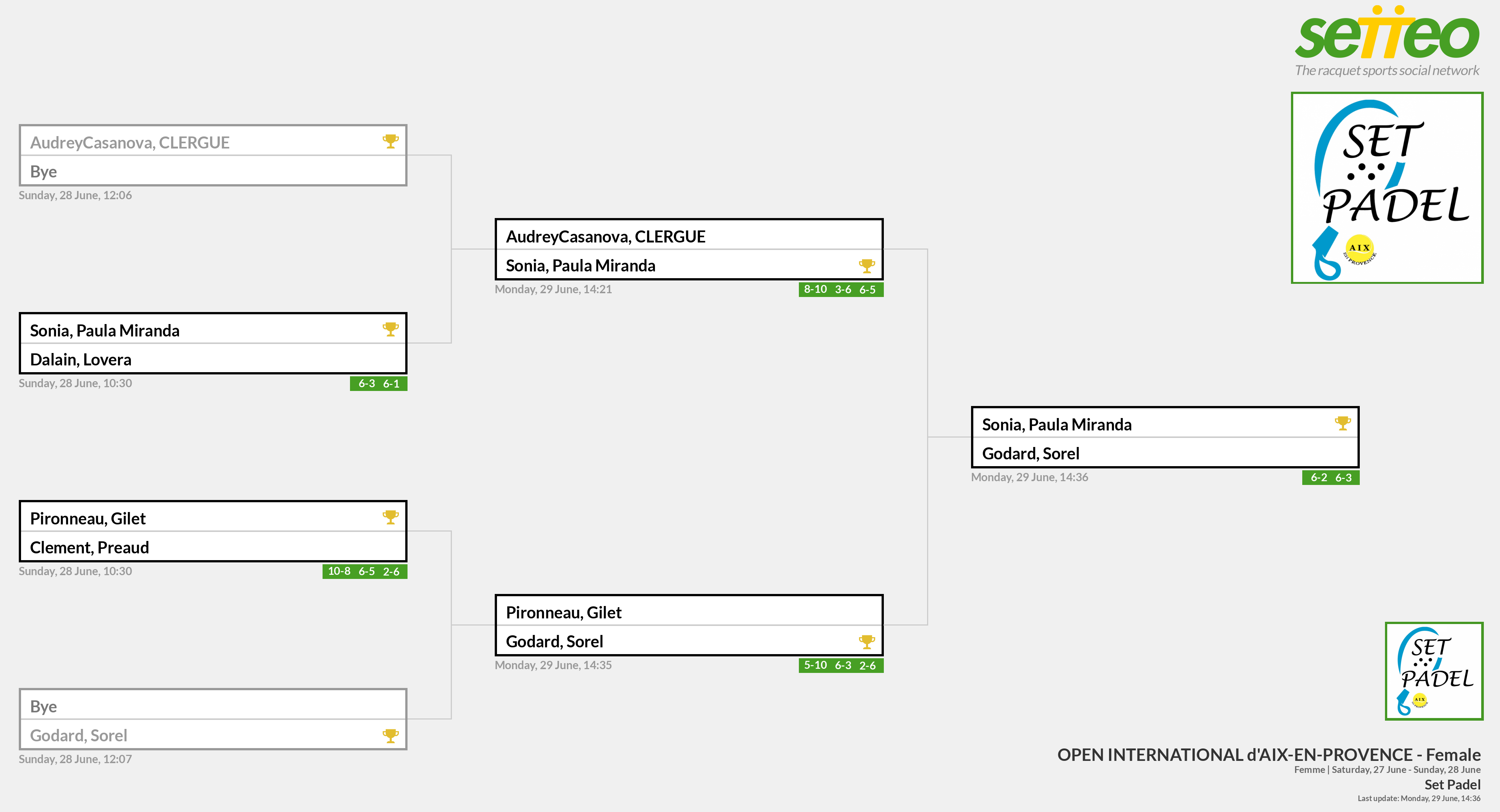 ... They have fallen in the face of a tenacious and technical Hispanic-Brazilian pair. It must be said that Sonia and Paula Miranda are experienced players. They make very few mistakes and exploit the possible inaccuracies of his opponents.

First in the semifinal, they had fallen to one of the best French pairs: Audrey Casanova and Laura Clergue. For a good year now, they train together at the club Set in Aix under the advice of coach Jerome Shaoffer. We have seen the tremendous progress they have made in recent times. Despite a defeat that hurts (match lost in the super tie-break 10 / 8), they do not have to blush their good performance announcing good omens.

In the final, it is another French pair known for its regularity and combativeness on the women's circuit that will face the Spanish pair: Sandy Godard and Géraldine Sorel. Match a little more complicated for the French who will face a Spanish technique definitely sharpened. However, they do not have any more, do not have to blush of their course. Recall that they had to come out a big match against Pironneau / Gillet to emerge victorious from this confrontation (10 / 5 super tie-break).

French 1 in the final square

David Luke and Jordi Juan, both 234th players in the world (at World Padel Tour) were too strong in the final against the mixed pair composed of the French Nallé Grinda, one of the very best French padel players associated with the Argentinian, Dario Gauna, former world No. 35 (Currently 85th).

And yet, if on paper, the pair 100% Catalan seemed to be a little more complete, the match was very far from being easy. While leading 1 set to 0 (6 / 2), Nallé Grinda and Dario Gauna managed to lead them until the tie-break of the second set. The audience split between the Spanish pair and the French-Spanish pair became more and more heard as a French flag bearer, Robin Haziza, who had swapped his paddle racket by the microphone of the sound system after losing a little more early in the day with his partner Jérémy Scatena against the finalists in 2 small sets.

In the tie-break, Nallé Grinda was tall. He succeeds in high class shots. Dario Gauna was imperial in the smash where he caused a lot of damage in the opposing ranks. But not enough.

The technique of the former world No. 35 is quite special, with a loose racket for each smash. Some pro players use a fairly similar technique, but it's still pretty surprising to see it. (See photos of the album)

Some small mistakes in the tie-break of the last set were too many for the French-Spanish pair.

The Catalans win after a magnificent match in 3 sets.

The big star of international padel was of course Cristian Gutierrez, world n ° 11 and former n ° 3. He was the partner of Fabrice Pastor, former world n ° 85 and owner of the World Padel Tour of Monaco. They could have gone further in this tournament, but they fell against the future winners of the Open d'Aix. Remember that they came out of a very complicated match in the quarter-finals against a very dangerous Hispano-Portuguese pair: Maros del Pilar and Tiago Santos (Portuguese n ° 1).

As we know, the padel is a mainly Spanish sport and they let it know with this time a square 100% Spanish. Pablo Majadas and Rodolpho Arribas won the silver category on the other Spanish pair Keko and Camison in two sets 6 / 4 6 / 2.

In conclusion, the tournament proved to be a great success, with every year in this tournament a lot of surprises and actions. Sponsors like BMW seem more and more active in the padel field. Remember that Jaguar is already involved through the National Tennis Cup. Given the scale of the padel phenomenon, it is obvious that brands have every interest in embarking on a sport like this one.