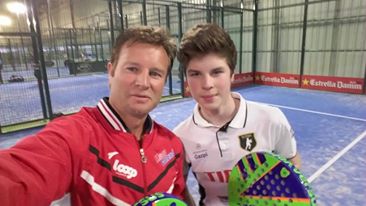 Sacred curriculum for this Argentinian national tennis champion cadet, pro en padel since 1993, Basque Country champion 2004 and 2005, Open San Sebastian 2006 finalist, Spanish team champion 2009, and who was among the 8 best pairs of the pro circuit from 2006 to 2008.

Experienced player of modest size, renowned for his intelligence on the track, he is associated this season with the Spanish drive Salva Oria born in 1996.

Here is our interview with a great man from padel international, based in San Sebastian.

Seen from the stands, your journey seems complicated, physically and mentally trying.


Right, we can talk about padel marathon! 4 high-level matches in 3 days. Between pre-qualifying and qualifying, we have to win 4 matches and finally reach the final table, THE big moment! But the competition is very tough. When you are no longer the seed and go through the qualifying box, it greatly reduces recovery times.

The experience is exciting but also very trying: the level of the players present on the circuit is increasingly high. Mental and physical preparation is fundamental… This is what the padel pro!

When playing with a new partner, who has much less experience than you, how do you approach a challenge? World Padel Tour ?

We have a goal today, to collect as many points as possible to position ourselves well in relation to the qualifications of a WPT stage and thus avoid the big guns from the start. We tear ourselves away on every game and try to polish our tactics to get as far as possible this season.


Le padel, one of the rare sports where you can see so many players associated with so much age difference?


Small precision ... the term veteran, I prefer the player experienced grizzled (laughs). More seriously, Salva invests with a devotion, a strength and an incredible pleasure and all this contributes to make the experience attractive. Appointment at the end of the year to see if the association has been beneficial for us.

You saw Salva play, he wants, he is strong, he takes his foot ... he is a very focused person who has well-defined goals.

I finally wonder if the veteran is not him (laughs)?

I also remember that Salva has just played with the excellent Matias Nicoletti (32e Wpt) in Valencia ... The experience he has more and more and then as you said: He has talent!

Do you move a little abroad for inaugurations ...?


We have recently inaugurated a club in Croatia (including former footballer R. Prosinecki is the owner) with the inevitable Miguel Lamperti.

I recently offered clinical internships in padel in Berlin. We feel an emulation of padel unprecedented everywhere in Europe, but also in America and Asia.

I have also been to Rome recently. Over there, it's the fever of padel… This sport has been experiencing unprecedented international development for several years.

Back to Spain, explain the situation of padel amateur, we are talking about a social phenomenon ...


The amateur world is THE driving force behind padel in Spain: everyone can play, we have fun from the start, we relate to each other by sharing more than in other sports. Without this pool of amateur players… little would be possible today.

I also think that new actors are emerging, and that's good. At the level of the public and the players, it is not because a brand new club opens that it will seize the customers of the existing club and triumph economically.

You come from Argentina, the development of padel play yoyo there?

Le padel wins if and only if the quality of the services offered is optimal. We are from Argentina and checked it during the golden age of padel, a prosperous period that ended abruptly in the mid-90s, the two main factors in the decline of padel in Agentine being an unprecedented economic crisis and the injuries of inexperienced players entered in every tournament possible and imaginable.

In Argentina, the current revival of padel is based mainly on the reliability of the services offered by the clubs.

According to me Spain will not be confronted with this problem, the level of service is globally high ... for 1 club that closes ... 2 open their doors.