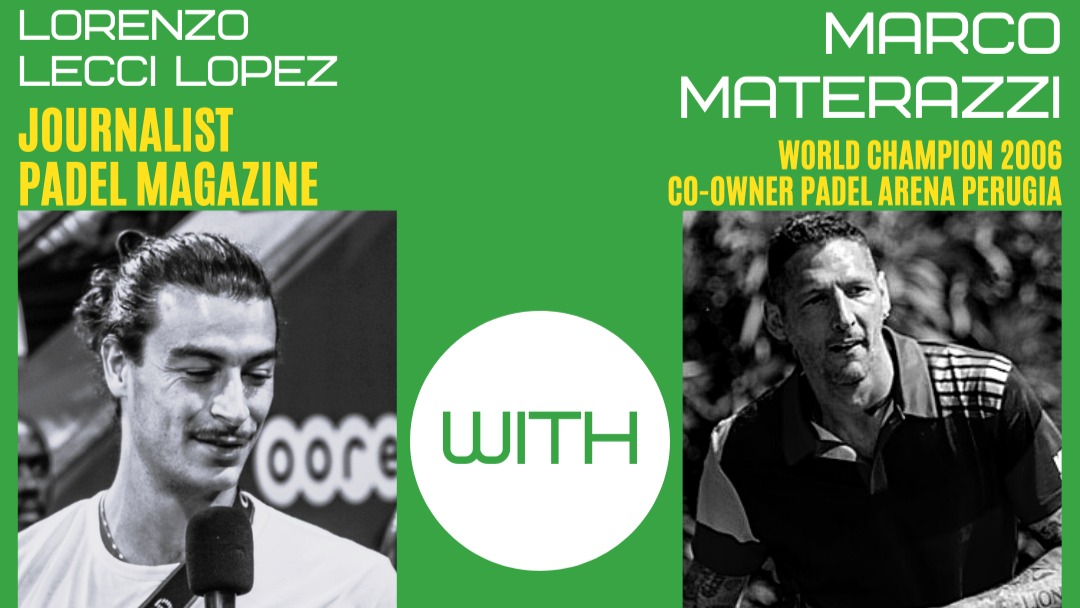 Marco materazzi went on the Instagram account of Padel Magazine for one exclusive interview. The ex-Italian footballer talks about his club padel, and opportunities to play with other football legends.

Lorenzo Lecci López: What is the concept of Padel Arena Perugia?

Marco Materazzi: “The concept is simple. We tried to do what is done in other places, but that we did not have here. We chose Fabricio Cattaneo as sports director. What hasn't been done yet and what we want to do is to grow young players. Captains does it very well in Sicily. The idea is to create a movement so that children can fight for something. I want them to be able to aspire to the national team, something that made me dream when I was little.

Lorenzo Lecci López: Are you planning to open another club in Italy or abroad?

Marco Materazzi:“At the moment we have 9 tracks, and in a month we will have 7 more. The idea is to go with our technical concept in another Italian city, and why not abroad too.

Lorenzo Lecci López: You Marco, how did you start playing padel ?

Marco Materazzi:"I was at Los Angeles, to Venice. There were these lands which were not of padel, but mini-tennis. I then returned to Riccione, which was one of the first towns to believe in padel. I was taken with passion, then I thought that when I had the possibility of creating an indoor club I would do it. I am a real indoor defender. There aren't all the weather complications of the outdoors. Here you can play every day.”

Lorenzo Lecci López: How do you define yourself as a soccer player? padel ?

Marco materazzi give the floor to his coach Fabricio Cattaneo.

Fabricio Cattaneo:“The most important thing with Marco is that he understands the sport well. He is very good at to the defense, especially with the windows. We are currently working on improving his net game with the volley, and the bandeja which is already much better. The highlight of his game is his tactical aspect. To padel it's easy to improve, but the hardest thing is to understand the game well on the tactical aspect, and Marco already has that.”

Marco materazzi :“The only problem is that Fabricio wants me to play against less strong players to attack. But I want to play against the strongest to beat them! We have to find our middle ground.”

Le padel will be Olympic thanks to Qatar

Lorenzo Lecci López: We saw you at the World Cup in Qatar.

“Qatar has taken the initiative and is developing the sport very well. There will also be a stage on March 28. I am convinced that they will do great things. This is very important for the development of current players. This will allow the sport to become Olympic and I am convinced of it.”

Lorenzo Lecci López: Who are your favorite players?

Marco Materazzi:“I know a lot. The first 10 are friends, and are really strong. Galan and Lebron are currently the strongest, especially in the strategic aspect. We must not forget Bela, who is incredible for the movement. Navarro, Sanyo, Di Nenno, Chingotto, Stupa, Tapia… It's ultimately like the Champions League, it's the details that make the difference. They are very professional.”

A Champions League of Padel

Lorenzo Lecci López: Who is the best footballer in the padel ?

Marco materazzi :“In Italy, I think it's Tomas Locatelli. It was he who started in Bologna. Then there is Candle, which I must name otherwise after it sends me a message. There are Totti too, but he has the land directly at his home, so it's difficult… There are plenty of others. In terms of adrenaline, it's great. And you have to make tactics with the teammate. We are talking about the diagonal. These are things we used to do on the football pitch, and it's easier to cover that 10x10m pitch.”

Lorenzo Lecci López: Zidane in France, Zlatan in Sweden. These players open clubs like you. When will a tournament of ex-footballers in padel ?

Marco Materazzi:“Sooner or later we will have to do it. In Spain there is also for example Puyol which is very good. We could also do this tournament by country why not. We could talk to the gentlemen of Qatar about it, right? I will try my luck!”