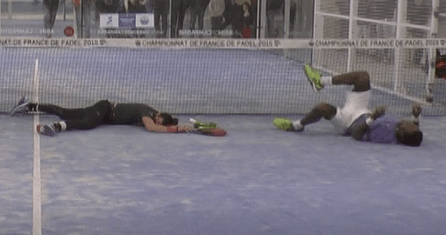 With a match that started at 9h in the morning, we would have thought that there would be nobody on the balcony to see this quarterfinal yet so important in this open Lyon: Monfils / Haziza Vs Boulade / Moreau

However, the public was present and we had the right to a great show with points of madness and even a point that could turn into a drama for Robin Haziza and Gael Monfils.

While the players are at the end of the second, the fight is bitter and the score very tight, Robin Haziza and Gael Monfils are telegraphing the net while they were both wanting to smash a ball. Both players then collapsed.

For a short time, the audience will hold their breath because the players were lying. Robin Haziza seemed particularly painful the first minutes.

Finally, the match resumed after a break and they won in 3 sets against yet one of the best French pairs.

We must pay tribute to the game of Gael Monfils, but also and especially to a great Robin Haziza who kept talking during the game to help Gael at times misplaced on the field.

Moreover, Gael Monfils in a press conference will talk about the important contribution during this Robin match.

The other quarterfinal will see the victory of favorites Aitor Garcia / Justin Lopes against the pair Salles / Gautier. A match where the pair Gautier / rooms had a chance since she won the second set after losing the first. But in the 3e set, Aitor who was a little lost will find his mind to make an explosive finish.

In a few minutes the half starts!