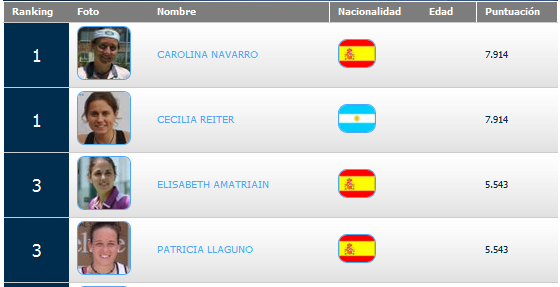 Padel Magazine - You might think after the Bilbao tournament that Carolina Navaro and Cecilia Reiter are worried. And yet with more than 2500 points ahead of the competition, they have a real safety mattress to see ahead.

Yet if we scratch a little, we realize that the finalists change more and more. We see, for example, Alejandra Salazar being in 10e position while she has the potential to return to the top 5 and even why not take her place number 1. And they are numerous to be able to apply at least at the top 3.

If we also analyze this table we realize that unlike men, Spain is much more represented. Why ? Hard to answer. But we realize that women's teams in other sports are well placed. The culture certainly but not only.

The dominance is Spanish-speaking 100 with Spain headlining: 7 representatives against 3 Argentine in the top 10. It does not surprise anyone. On the other hand, Navarro and Reiter are in their thirties. One at 37 years old and the other 31 years old. We must believe that we must spend the thirties to be too much of the world padel hierarchy.