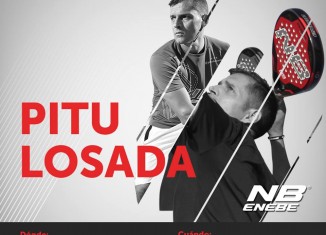 We thought to see Pitu Losada withdraw permanently from the life of the padel ... But it was actually only part of professional Pista Padel.


Pitu Losada is a great padel champion, three times world champion and n ° 1 in the FIP Ranking (International Padel Federation) in 2007, 2008, 2009 and 2010 has in fact decided to invest more in its historical partner: ENEBE.


He will be the strategic adviser of Alicante brand ENEVE PADEL and thus consolidates its relationship with the brand for a duration of 6 years.

This means that the former champion will be busy validating the different paddle rackets put in place by Enebe, will advise the brand on the trends of the padel market and continue the clinics throughout Spain.


Pitu will be assigned to the R & D of rackets padel, but he will also have to advise on market trends, clinics in Spain, and.

A new adventure begins for Pitu!