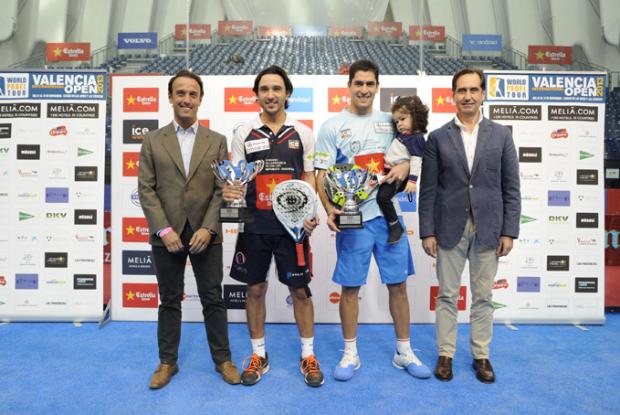 Padel Magazine - What a story ! Sanyo Gutiérrez and Maxi Sánchez managed to secure their first title in Valencia World Padel Tour after close matches and especially after beating the world number 2 in the semifinals.

The Valencia International Open ended with a great final, but Miguel Lamperti and Maxi Grabiel logically lost 6 / 3, 7 / 5 and 6 / 4.

Yet on paper, we could expect a match in 5 sets, so levels seemed close.

If we had to take a step back, it is obvious that the key match is this famous semi-final between Sanyo / Maxi and Juani Mieres / Pablo Lima. The world number 2 had always won until then ... Hence this nice surprise.

So there was a huge opportunity for the youngest of the world's top 10 pairs to turn the test into winning this final. On this point they were perfect, leaving only crumbs in Lamperti - Grabiel.

While the WPT finals are now in 3 winning sets, we could hope for an opposition that could last. Each set was relatively tight but Sanyo and Maxi had decided to win quickly and well. Mission successful!

The first set was completed in just 31 minutes. A single break is enough in the sixth game to validate the set 6 / 3.

The second set was certainly the most exciting of the three, but Miguel y Maxi missed some key moments when they could have made the difference. They were leading to 4-1 on the scoreboard; this 2e set seemed to be going well for them. But here it is… at 5/3, Lamperti loses his serve. Sanyo and Maxi will no longer lose a game by winning the following 4 games… 7/5 is the score of 2e set.

the 3e set made widely and cause for 4e global, since leading 3 / 0 in the 3e set, it was hard to see how Miguel y Maxi could come back.

Maxi Sánchez was particularly strong with little error and efficiency that makes us believe that this pair could next year or even the master that is fast approaching, put a mess at the top of the world hierarchy ...