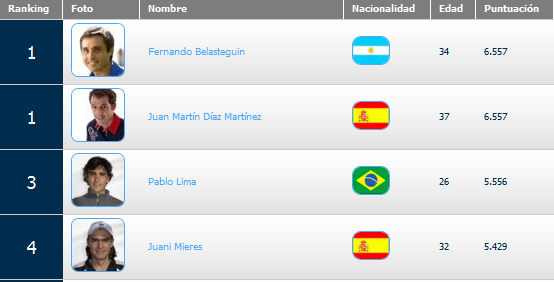 Padel Magazine - What if we had to wait until XNUMX to hope to be one of the best ???

The world 1 numbers namely Fernando Belasteguin and Juan Martin Diaz have 34 and 37 years ... Pablo Lima and Sanyo are the only ones in the top 10 to have less than 30 years.

We also note that the two best world pairs widened the gap with the competition with almost 2000 points of difference.

Is the WPT lacking young people or is it the sport that wants that? Difficult to answer. But we obviously think of Sanyo, the very promising Argentine player, 29 years and his partner, Maxi Sanchez, 11e world player, aged 26 years who are slow to tickle the best. The bambinos still remember it after this clear defeat against the kings in half of the WPT of Bilbao a few days ago.

We'll finish this analysis on this week's ranking, that there are 6 Argentineans in the top 10. And we do not count Juan Martin Diaz who was of course naturalized Spanish ...