Thanks to his victory in the 2nd round of the WPT Madrid Open preprevias, with his partner Teo Zapata, Benjamin Tison is now the only French representative among the men.

We dreamed of a clash between Franco-Spanish pairs in the third round of the preprevias of the Adeslas Madrid Open from World Padel Tour but we will not have it ... Indeed, if Benjamin Tison and Teo Zapata will be there tomorrow morning, this will not be the case for Bastien Blanqué and Borja Yribarren.

For their first tournament together, Bastien and Borja lose in the second round of the preprevias, facing Mercadal (115) / Bohorquez (148) : 6/3 6/3 final score. It is facing this Spanish pair that Tison and Zapata will play tomorrow, at 10:30 am, their passage in the table of previas. For their entry into contention today, the Franco-Spanish pair won in straight sets, 7/6 6/3, against Del Valle / Goenaga.

Earlier, Johan Bergeron and Robin Haziza had suffered the law of the seed number 3 of the preprevias, Moya / Alonso: 6/1 6/2.

Benjamin Tison will not be the only tricolor tomorrow on the slopes of Rivapadel since Melissa Martin and her Spanish teammate Marina Fassio start their tournament à 14h00 against the pair Lucía Pérez Parra (103rd) / Cristina Carrascosa (83rd). 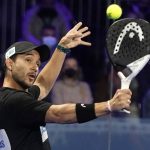