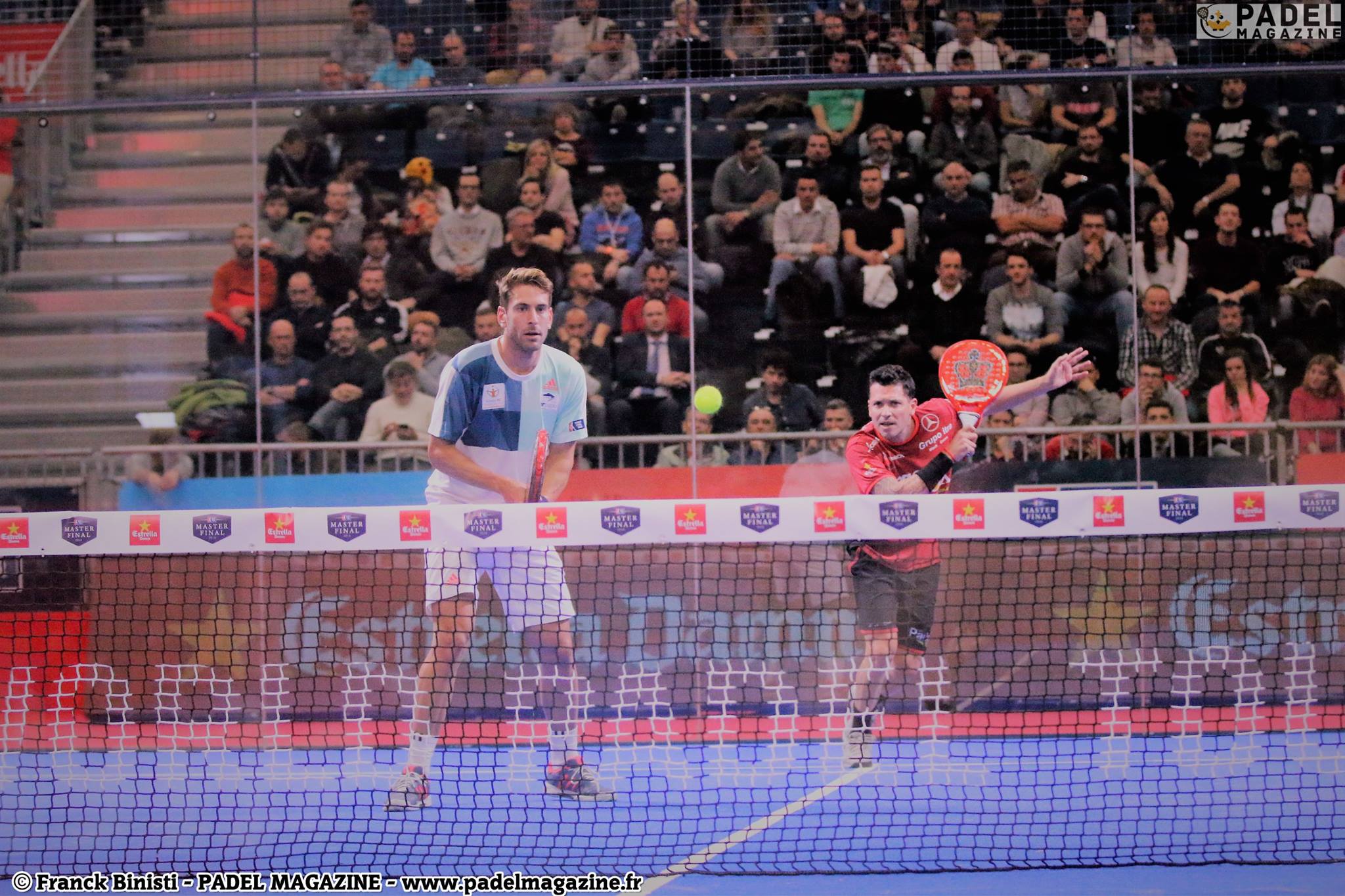 No surprise in group A

the 1er match was against a pair of formidable Matías Dias / Maxi Sánchez against Alex Ruiz and Adrian Allemandi a new pair formed for this final master, both players with the same coach Rodrigo Ovidio. Matías Dias / Maxi Sánchez left no chance for their opponents. They win the 1er set in less than 42 minutes by inflicting an 6-0, showing that they came in great shape.

Not only Ruiz / Allemandi played together for the 1ère time, but it was also a great first for Adrian Allemandi who found himself on the left. In the second set, Germani and Ruiz avoided another 6-0, they lose the match on the final score of 6-0 / 6-1.

Before the world numbers could take their marks, they were led 4-1 in the 1er set, an upheaval could have occurred. But Bela / Lima do not let go, they raise their level of play a notch and come back to score to win the 1er set 7-5.

The second set starts in the same way. The best Spanish pair is breaking to lead 4-2. But as in the 1er set, world numbers once again battled to tie 6-6. Bela / Lima win their 1ages victory of the tournament after the tie-break.

Favorites also go to group B

The first set starts with a lot of difference between the two pairs. The Mieres / Lamperti pair leads 5-1 in less than half an hour. However, Maxi / Cristian react quickly and return to 5-4. But it's a bit too late and Lamperti / Mieres wins the 6-4 set.

In 2st set, Juani Mieres and Miguel Lamperti gave even fewer options to their opponents and win 6-2.

The second match was against Paquito Navarro and Sanyo Gutierrez against another pair that formed for the Masters final: Marcello Jardim and Lucho Capra.

Paquito and Sanyo were ruthless and led 5-1 after 32 minutes of play. Ramiro Choya's students win the 1er set 6-3.

The second set continued in the same vein with the world 2 numbers that claim superiority over 2 players who lack experience together and win this second set 6-2.

The first matches of the groups 1 and 2 required three sets to determine the first winners.

The first game of the 2 group pitted Cecilia Reiter against Carolina Navarro against Marta Ortega and Alba Galán. The Galan / Ortega pair wins the first set 6-1 in less than 44 minutes of play. Reiter / Navarro could not find a solution to counter the fast and aggressive play of their young opponents.

However, the experience of the older pair helped them to reverse the trend in the second set and take the 6-3 set. After one hour and 34 minutes of action, the match will be decided in the third and final set.

The third set had some ups and downs, but the Ortega / Galan pair eventually took the lead and won 6-3. They earn their first points in the group and go one step closer to the semi-finals.

The next match of the group 1 opposed Gemma Triay and Lucía Sáinz against Patricia Llaguno and Elisabet Amatriaín.During the first 4 games, each pair keeps its service and it is the pair Patty / Eli who break in 1erin the fifth game then wins this first 6-2 in just over 44 minutes.In the second, Triay / Sainz react, break in and lead 2-0. It will be an 2st hard set, won 6-4 by the pair Gemma / Lucia.In the 3e set, Eli Amatriaín was forced to suspend the game following an injury, giving Triay and Sainz victory. With the injury of Amatriain, Victoria Iglesias and Cata Tenorio will be substitute and will play against Alejandra Salazar and Marta Marrero.