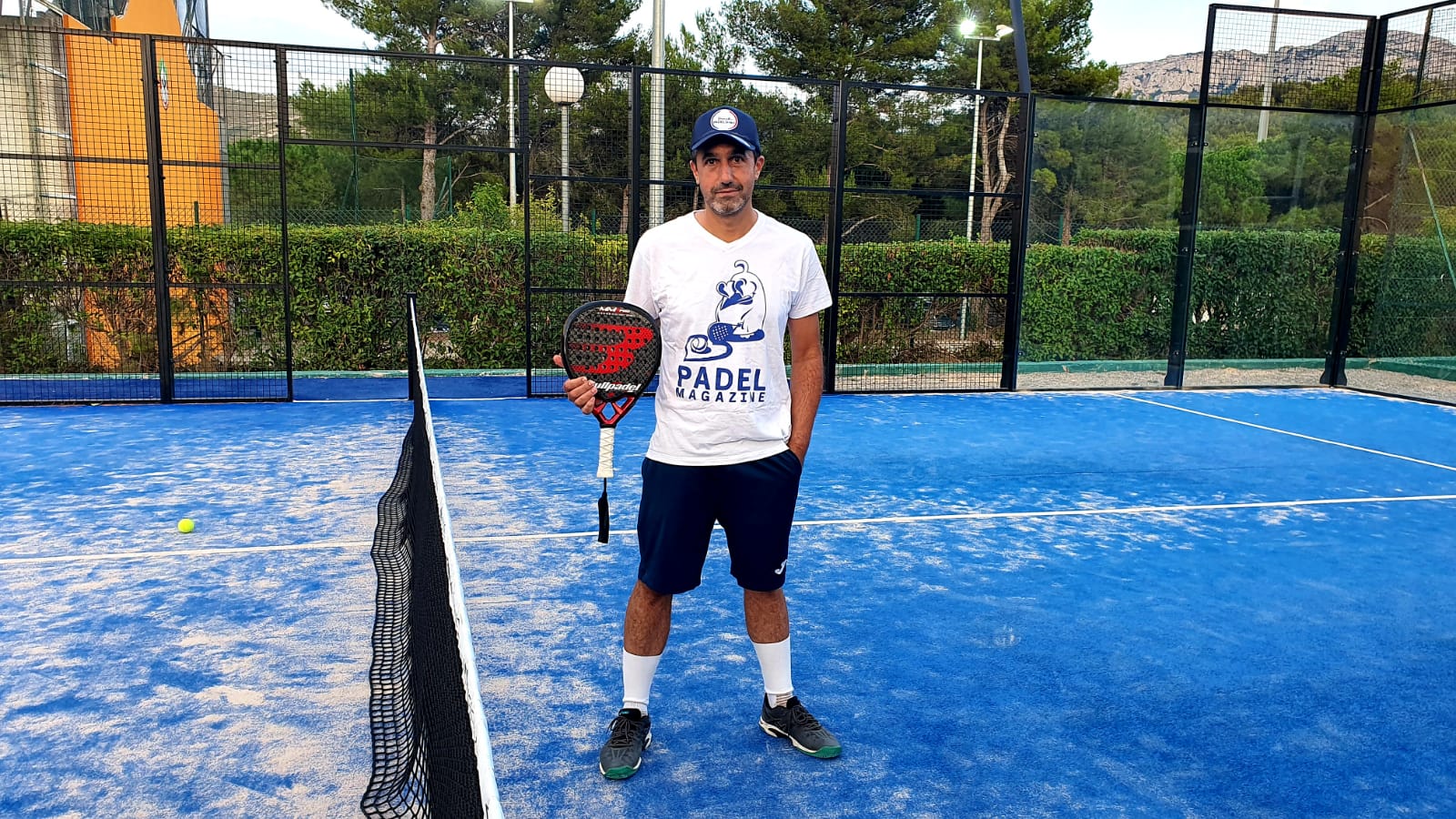 As promised, here is the long-awaited test of the famous MM1 from home Bullpadel.

After 1 month of playing with this pala, comparing it with other models, and analyzing and deciphering the different characteristics, the objective report is now available at Padel Magazine !

As usual, it is the specialist Stéphane Penso who sticks to it!

A clever mix between Vertex and Hack

We are dealing with an incredible racket, both for its unique creation method, its daring design and its ultra limited draw.

It is composed of the best of the 2 flagship products from Bullpadel, namely the core of the Vertex and the core of the Hack.
The common point of these 3 models lies in a pala made of 100% carbon fiber, both in its frame and in its faces. 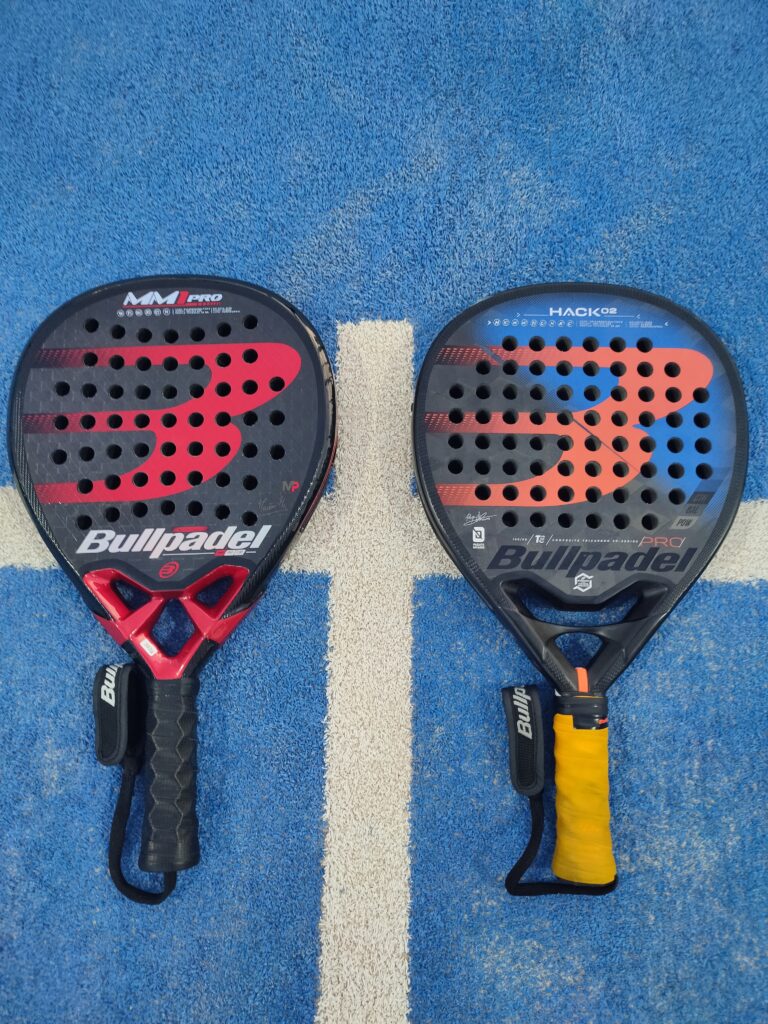 Hybrid in shape and benefiting from a medium / high balance, it is more categorized as a diamond than a drop of water. This suggests that the heart of the target will obviously be that of the attackers.

As for the core, including the famous BlackEVA rubber, it is developed with a stiff density and a medium elasticity allowing to offer a dry and compact performance, and a feeling of maximum security during the violent strikes. It is the same core as that found in the brand's top palas in 2019.

It is a technology that is not obsolete but proven, and the choice of Internet users has been very thoughtful because this community knows how to recognize the benefits of a kernel that seems outdated on paper, but which stands the test of matches obtains an optimal performance. . 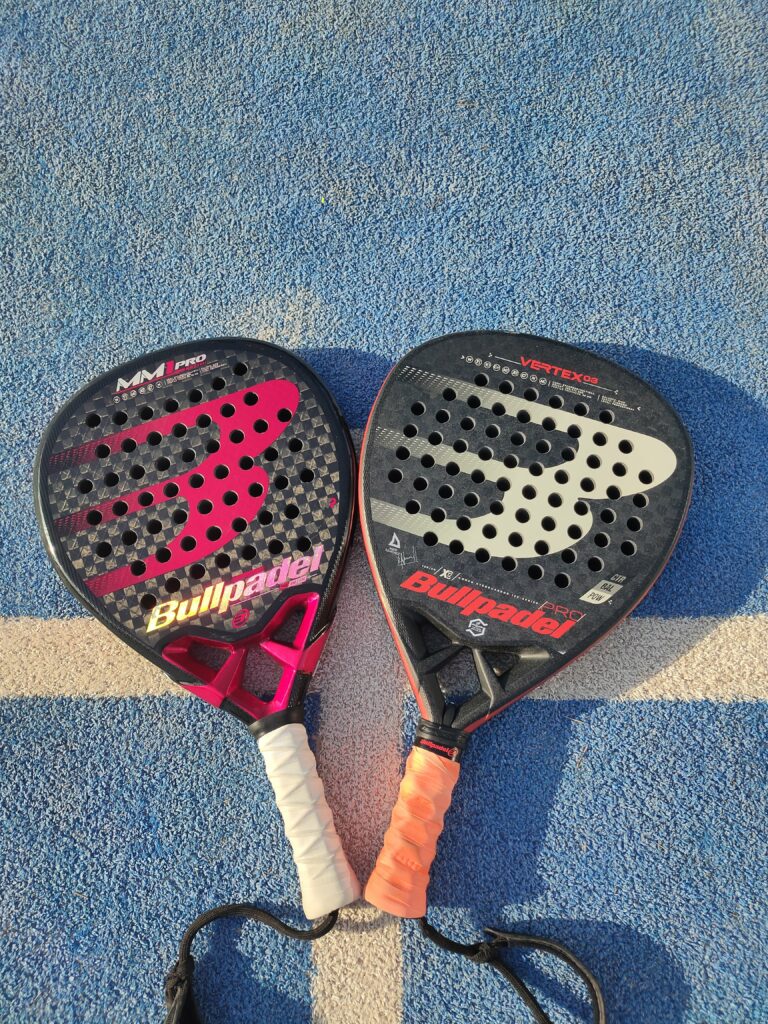 For comparison, the Vertex 03 and Hack 21 feature a new MultiEva core, which was first seen in the 2020 season. It is an eraser that has two different densities:

As for the faces, they are equipped, like the old Vertex 02, with 12K carbon, which allows the ball to feel good entering the rubber and thus widen the sweet-spot. The latter is quite simply exceptional, and off-center the balls will be carried out in comfort and efficiency.

Regarding the bridge, the Bullpadel MM1 Pro therefore has the essential Vertex heart, the flagship and proven model of the Spanish brand. Vertex technology is designed with a racquet core that distributes weights and forces evenly throughout the frame to increase stability upon ball impact.
This bridge succeeds in reinforcing the firmness and resistance of the racket, and offers a more reactive structure in rushed and feverish movements, while minimizing the vibrations produced by muscular play.
Twists and vibrations are considerably reduced.

We can also see that the MM1 Pro compared to the Vertex 03 and the Hack 21 bypassed the Vibradrive, a rubber system inserted throughout the handle which allows additional absorption of the vibrations generated by powerful strikes and / or off-center.

Thanks to the moderate weight (363gr), the maneuverability is unexpected and really appreciable for a racquet that targets the offensive segment, where maneuverability is generally only secondary.
The drilling plan is specific and innovative for Bullpadel, which remained since the dawn of time on a most classic scheme. 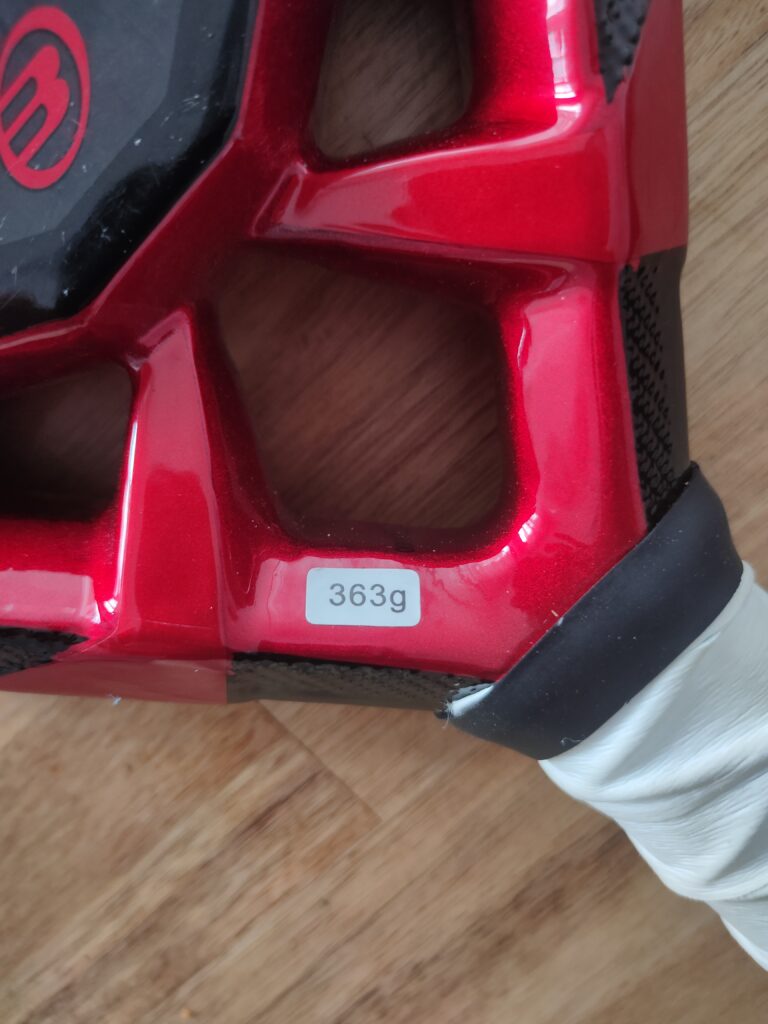 On the faces, this pala offers a 3D diamond textured effect, which offers less ball rotation but a little more durability than the TopSpin of the Vertex 03.

The Hesacore grip is obviously part of the game, an essential element for some, prohibitive for others, but which has the merit of being included in order to further assert the premium side of this model.

Note a very important factor for me, the sliding and padded strap, which will give you unparalleled comfort but above all will prevent you from turning the pala in all directions at each change of side in order (to try) to find the way. ideal and the precise attitude so sought after to benefit from an application that is always exemplary, neither too loose nor too tight!

It is a very pleasant pala to handle, and it will get you out of quite complex situations when you have to react quickly enough Its performance at the back of the field is a little behind, due to the hardness of the rubber which will limit the exits of bullets.

Close to the net, it allows a good reactivity in the transition zone, but also to block the strikes of the opposing team. The fairly hard rubber provides obvious precision with each stroke, to the detriment of a certain comfort and a contained ball output.

On the other hand, the latter expresses all its potential in smashes, attacks on the fly and counterattacks from the baseline.

The vibrations received are in the low average, RAS to report on this side. We expected no less from a racket whose technical characteristics tend to be closer to attacking!

In conclusion, it is a quality pala, suitable for intermediate and advanced players, the result of its format, its maneuverability and its sweet-spot which has been considerably enlarged compared to its 2 cousins. 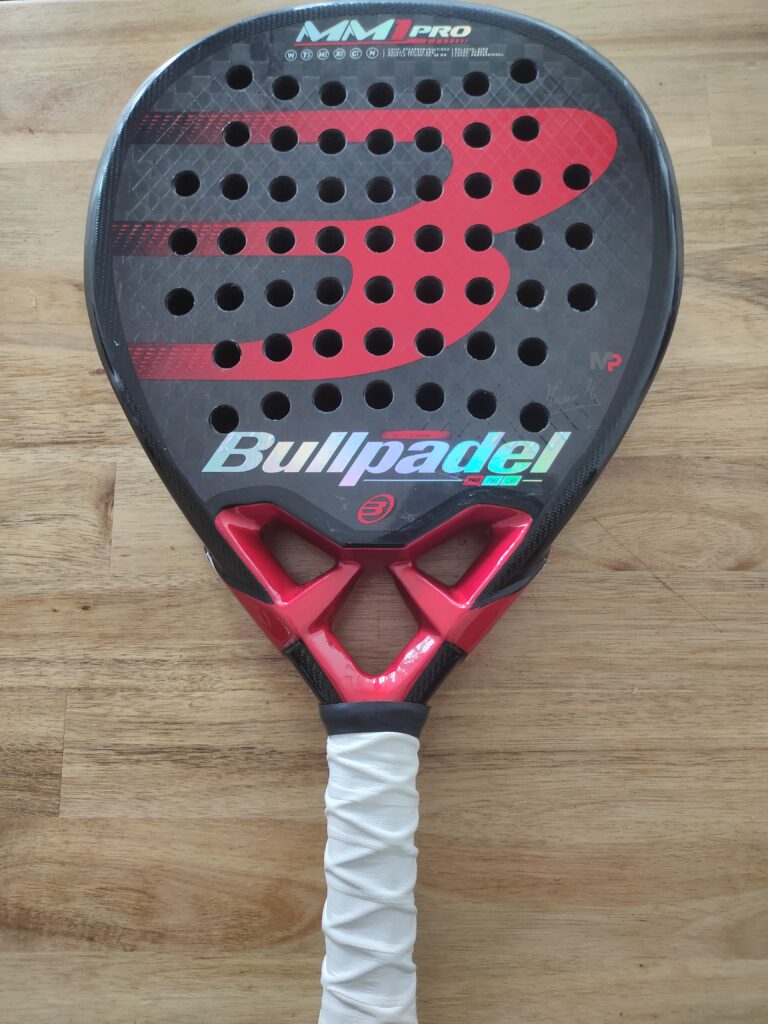 It is a versatile racquet that can be used for both right and left players. In the defensive phase, the control could be a little better, but the average exit is not that confusing and it will still help you in difficult situations. The header weight of a racket of this size allows for a substantial reserve of power, while the enlarged sweet-spot makes reflex volleys and off-centers safer for less experienced players.

An effective weapon for aerial play

Indeed, the aerial game is undoubtedly his favorite place.

Volleys and trays come out vigorously and with impressive ease.

The visual part is bold and well done. Registration Bullpadel space gray written on the frame as well as the reference of the model MM1 Pro reflect beautifully when the sun brushes the faces. 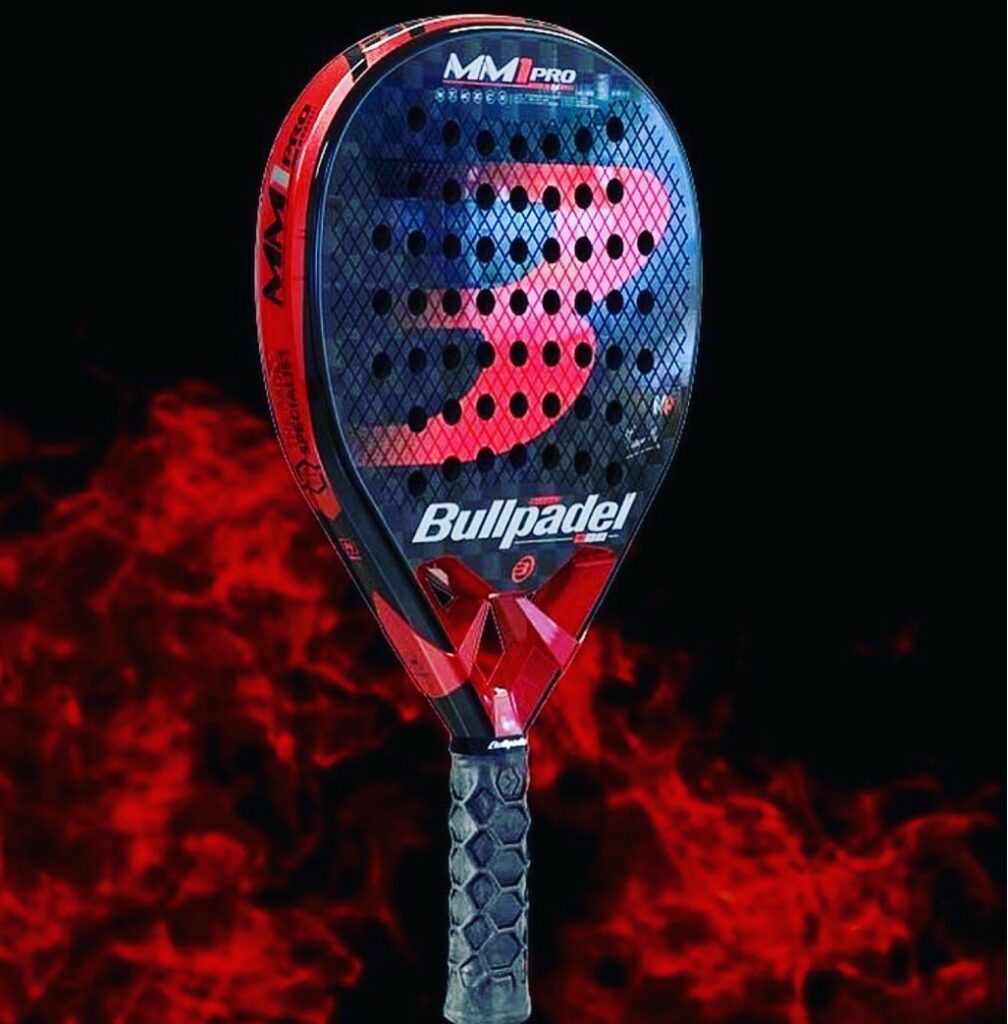 Sold for 149 € when it was launched in March 2021 (but delivered in August), it is obvious that the quality / price ratio is more than exceptional. Manu Martin wanted to reward the self-sacrifice of his community by offering a great price on this model which is already a collector's item. It's obvious that Bullpadel achieves virtually no margin on this model, which should have come out at double the advertised price, as assembly and R&D must have been tedious.

Unfortunately, the 2500 units were sold within a minute, and the only way to get your hands on this fabulous model will be to check social media or sharing sites on a fairly regular basis.

Nevertheless, I am told in the headset that our partner French Padel Shop would have managed to get some models (they will explain to me how) and will put, via a draw, an MM1 PRO to be won very soon.