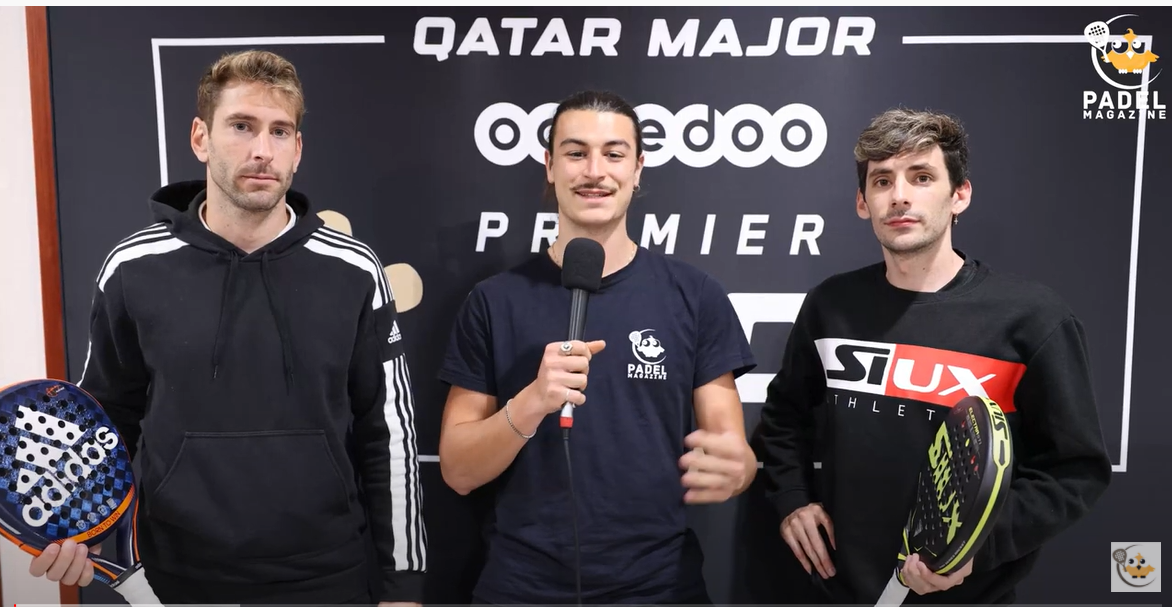 While the Hispano-Argentinian duo has just qualified for the semi-finals of this Premier Padel Qatar Major, we had the chance to meet the two players and to be able to collect their impressions after their victory of the day.

We also took the time to ask them what they thought of the press release that the WPT published on its website this Thursday.

Finally, the two players confided in the playing conditions in this brand new competition.

A good start to the season

Already semi-finalists at the last Open which was played in Vigo last week, stupa and captain america qualify for a new last four.

They prove once again that it is a pair to be reckoned with this year and that they have not said their last word.

“Each game will be a big challenge and we will have to adapt to each situation. Qualifying in the semi-finals in Vigo and today gives us the necessary confidence."

The pair led by Carlos Pozzoni will face this Friday a pair that he knows well and which is the one who eliminated them during the last tournament. We are of course talking about the shocking duo made up of Paquito Navarro and Martin Di Nenno

"We should not put pressure on ourselves, they are very good players, they have just won in Vigo, but we know the formula to achieve victory. We must believe in our game and above all believe in ourselves” replica Alex Ruiz, confident about his upcoming meeting against numbers 2.

The WPT breaks its silence

Many people wondered about the silence on the part of the World Padel Tour. Precisely, the circuit spoke just today about the players' participation in the Premier Padel Qatar Major.

We therefore asked several players for their impressions of this tense situation, to say the least. After Navarro and Di NennoIs Franco Stupazcuk who sticks to it.

"I haven't read it and I don't want to go into it. As another player would say, these are office things. We are gamers padel, there are people to solve this.
I don't know what's going on outside. I am represented by an association, we had confidence in it and these things must go through it. Our role is to play padel. "

This Friday very hot temperatures are expected on the Doha side. Indeed it seems that the mercury is close to 36 degrees. And who says heat, says very fast track.

“Our type of game is based on power and aggressiveness so yes as soon as the temperatures are high it benefits us a lot. Personally, I love these playing conditions because I'm a player who likes to hit hard. We played well, the level is getting stronger so we are delighted and we will enjoy this semi-final”.

Not in favor of “punto de oro”

Le Premier Padel Qatar Major is played without decisive point, and Bela explained to us that it was the players who had made the decision via a vote.

Alex Ruiz explains to us that he prefers to play with the advantages:

“It seems logical to me that it is the players who vote. This choice was taken into account via the association (PPA). It is true that the golden point brings a more "show" side for the spectator but I think it is detrimental to our sport. For my part, I prefer to play the advantages”.

Same story on the side of his teammate:

“The punto de oro was something new and we had a hard time getting used to it, that's why we prefer to play with the old rule”

“I think it's the first time the players have felt valued. The conditions are excellent and the only thing we want is to feel comfortable so that we can give our all on the pitch.” tells us the Andalusian.

Find now the entirety of this interview in Spanish thanks to the video below.