Are you planning to go on a padel holiday in Spain, but you were like sleeping in the back of the class during high school Spanish classes? A Spanish speaker offers a part but you hesitate because you did German second language? This post is for you!

As we have already mentioned in the past, the communication on the padel field is fundamental. You have integrated well and know perfectly give the right information to your partner ... in French. But what if he speaks only Spanish? Here are the words and phrases you will need to memorize to express yourself as well as a World Padel Tour player! Let's start with the specific elements of the padel game.

Now let's look at the expressions that will allow you to inform your partner during a point.

And of course if you want to have a drink at the end of the game with your partners, you can for example say "una botella de agua por favor" 😉 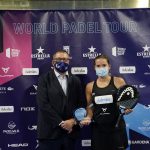