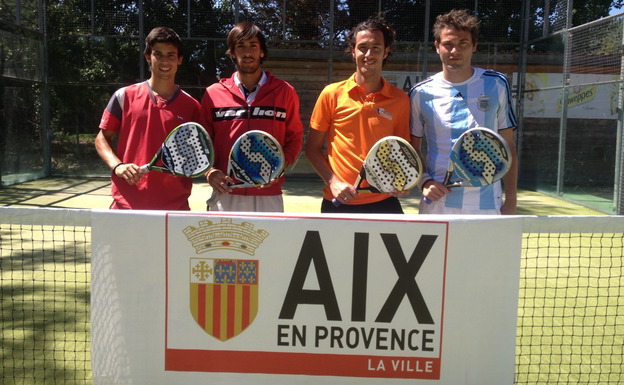 Padel Magazine - In Aix-en-Provence, the French were strong against our courageous and trained Spanish speakers.

But let's start from the beginning ...

Once upon a time, Parisians conquered the salad bowl of Aix ...

Arrived a day before everyone else, we noticed that the preparations were not done by themselves.

Jean Marc Lenoir, the boss and Romain Beaugrand, the club's "Swiss Army Knight", were at the helm to make this tournament a success.

The first WE allowed to qualify for the qualifying phases of the second.

You did not understand ?! Nothing serious !

The qualifications of the 1er June were memorable with games that will remain in our hearts for some or ... elsewhere for others.

The qualifications in the form of chickens (around 40 teams from all over the PACA region) made it possible to release 8 teams for the final draw.

The final table has been designed so that the matches are the most played possible and go crescendo.
Indeed, the stronger teams entered the table at the end of the afternoon, on Saturday. Except that the “Binisti's brother” pair met the “Parisian eaters” in the first round!

Appraisal: More than 2 match hours and the 2 grilled teams for the rest of the competition.

But that was before the drama!

6 Spanish pairs - Racket in hand - ready to do battle participated in this tournament to eat "french".

The least we can say is that there was damage ...

A Spanish pair was particularly distinguished in daring to beat our famous French pair Patrick and Kévin Fouquet, the public thus losing a very appreciated team.

Our Spaniards were in the final against Robin Haziza and Jeremy Scatena from Nice to save the homeland.

As soon as the warm-up, the French-Spanish public gave voice. This foreshadowed a hot match.
This was the case.

After a 1er set very hung and won by our French, Robin and Jeremy took off in the second set to give the coup de grace after a burst of pride of the Spanish pair where the public came very many for this event believed a turnaround.
And the best for the end…

The women's final table composed of 8 teams also gave us a great show, with a level that has nothing to envy men.
The spectators were not mistaken. More than 800 spectators participated in this tournament !!!

It was finally Virginie Pironeau and Kristina Clément who raised the cup. But congratulations are imposed on Géraldine Sorel and DODARD Sandi the unfortunate finalists, and Audrey Casanova and Auna Apponte arrivals 3e.

Congratulations to the organizers. And it's not over. Jean Marc promises us a 2014 year rich in rebounding including " a new format tournament with even more players "… We can not wait to be there !