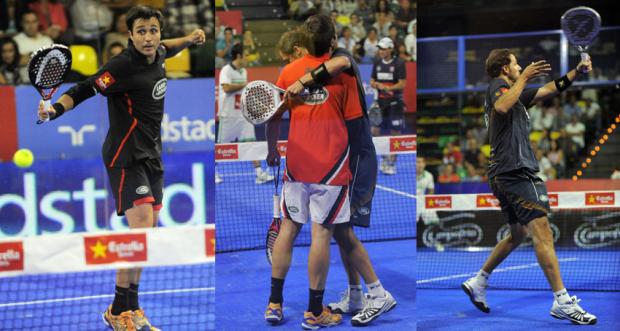 Padel Magazine - They did it! Juan Martín Díaz and Fernando Belasteguin won yet another title. This is the eighth of the season, the fourth in a row and the 159th since playing together.

We could summarize this match in 3 words: emotion, stop and stiffness.

It is true that since the finals are now in 3 winning sets, the physical takes on an increasingly important role. And Bela thus encounters a problem: his troubles with his aches during the match show a certain fragility that the opponents would be well advised to tickle.

Three hours of game then but the end is always the same: The kings tamed the princes ... But for how long?

If in terms of regularity in the game, Bela and juan are still a tone above, Pablo and Juani may be tempted at their next meeting to work more Bela.

The second set was more consistent with opportunities for both pairs to take the lead ... The match may have been played at that time for Pablo and Juani. Despite an advance of 2 games, Bela and Juan were still in the line of sight of the princes ... But the kings won the 2e set 6 / 3.

Until then, nothing was clear, there was no superiority, everything was very open. But the story was going to change in this third set that proved decisive. First, because everything seemed easy for Diaz-Belasteguin. Bela served in the sixth game to lead 5-1, but ...

Princes unleash and instead of being led 5 / 1 in the 3e set, they come back to 3 / 4. And there, again in such an important match, Bela collapses. Once again cramped, he finds himself lying on the grass. Kineses, massages and water allowed Bela to return to the field, but with a limping right leg.

The abandonment was close for Bela but it is the princes who did not manage to take advantage of it by being totally breaker to lose the 3e set 7 / 5. Pablo and Juani missed this end of set because they should not have lost. In fact, the cut caused by Bela's cramps disoriented the princes by letting this 3e set go. The frustration changes sides and was terrible.

The loss of this third set is a blow for Juani and Pablo. Juani had to be treated by a doctor for a contracture on the right shoulder. The 4e set was a formality for the kings who won 6 / 2.

It was a real wrestling match with wounded on both sides.

Do not miss the final summary of the Bilbao International Open that you can see directly on this page above.