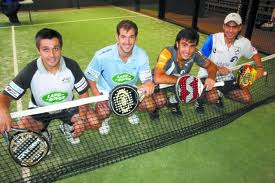 Padel Magazine - During the World Padel Tour of 2013 in Barcelona, ​​the spectators witnessed an altercation between the two best pairs of the circuit namely: Juan Martin Diaz and Fernando Belasteguin against Juani Mieres and Pablo Lima

The start of the dispute begins between Juan Martin Diaz and Mieres Juani. Then, raising of the voice and tears joined the spectacle of which they are however not customary.

It all started with a bullet. Bela stops play by catching the ball while they were in the middle of a rally. The referee then gives the point to the couple Juani Mieres and Pablo Lima.

And this is where the altercation originates: The referee does not appreciate the general atmosphere and stands by the rules purely and simply instead of putting back the point cque Juani and Lima had accepted. In vain.

Bela has nevertheless needed. First he should not have stopped the point as he did and in addition it is wrong because the ball does not touch Juani Mieres.

[highlight] Get an idea by watching the video yourself. [/ highlight]