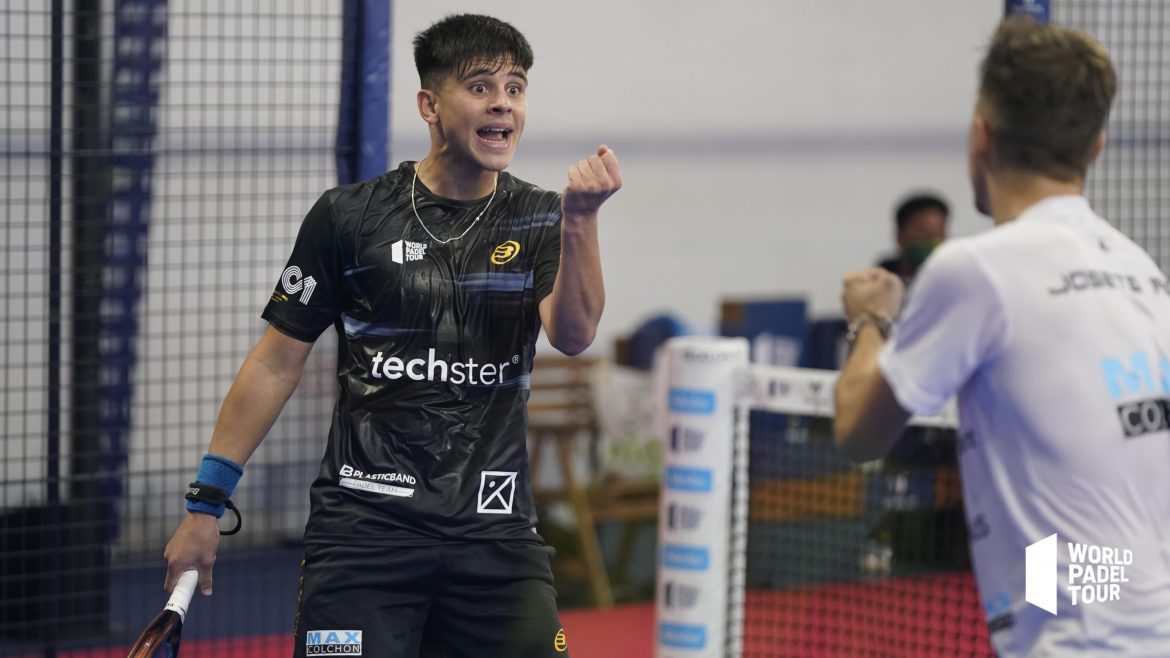 It's because of Saints chain Youtube Desde dentro del padel TV that we learn a little more about the native of Puerto de Santa Maria, in the province of Cadiz.

The youtubeur was lucky enough to be able to spend a day with the young nugget. It starts with a family breakfast before leaving for several hours of training. In a relaxed atmosphere and in the good humor that characterizes it Saints goes to meet those who make the daily life of Javi leal.

“His coach saw something in him”

“At home he's a very quiet kid, he plays the console, watches series but he's not a party animal. Whereas when he was little he was a pure stick of dynamite. He didn't stop ” confides his father to us.

"When he was little, of course we accompanied him, but a little later when he started training with Fran Cepero, the latter took him to the various competitions, and that is where he became more and more independent”

He started playing with me. I practiced a lot padel with my friends and when we got together, Javi came with us. Throughout the game he kept bothering us and when the sides changed he came to see me and asked me to throw a few balls at him. Otherwise at home he would start playing against the wall until we signed him up for a club to take lessons.

The first lessons only lasted a few months because his trainer at the time saw something more in him and advised us to enroll him in another school. He tells us that this kid was going to be champion of Spain. It turned out that he was right because in 2013 Javier was Spanish champion in the Benjamins category”.

The discussion continues around a good “breakfast” and what better way to start the day than to enjoy the typical Spanish breakfast: toasted bread with olive oil – ham and coffee. Quite an emblem among our Iberian friends.

As we said a little earlier, the Leal family is from Puerto de Santa Maria in the province of Cadiz in Andalusia. The father of Javi explains how the idea of ​​moving to the capital came about and why it happened so quickly.

“During a competition World Padel Tour in Madrid to which Javi participated, we went the next day to the M3 academy to see Alejandro Galan and Juan Lebron practice. They told him to take a pala and come train with them. While talking with Jorge Martinez, he told me that he wanted Javi come to live in Madrid to start a new adventure. In one month we had to rent our house in the south, move into a new apartment, negotiate with my employer a transfer to the capital and find Marta a new high school.

The first thing we did when we got here was take Javi in training".

Of course when you think about it, this change of environment in the space of a month must have been very hard for Javier and his family. Going from the sweetness of Andalusian life to the frenzy of a big city is not easy. It is the patriarch of the family who tells us a little more about this radical change.

"At the economic level it was difficult at the beginning because I am a civil servant and the salary I earn the same salary in Madrid as when I was in Cadiz. But here everything is more expensive. Even going for a beer or a soda in a bar becomes more complicated because we were only living on my salary so we deprived ourselves of going out and drank our drinks at home. Then came the pandemic and for each trip we had to carry out PCR tests. But it was during a tournament in Vigo that everything changed for Javi.

Remember that the young nugget was associated at that time with Miguel semmler. The two Spaniards who started in preprevias managed to enter the final table going to the quarter-finals by chaining 9 victories in a row. This had never been seen before.

His father recalls: We got ready to go to Vigo and it must have been 4:00 am when we took the road towards Galicia. Not a sound in the car, I remember they had to play against Sillingo and Mati Diaz. And there they win".

It is at this moment that Javi intervenes in the discussion:Wait, you have to tell them. They came to Vigo without a change of clothes because they were sure I was going to lose !” (laughs)

The father continues: “It's true (laughs)! So we booked a hotel and went to a bazaar to buy some clothes thinking that the next day we would leave. The next day comes, he plays, and he wins. Rebelote we go back to the same bazaar and we buy one or two t-shirts and underwear. Good the next day Paquito Navarro and Martin Di Nenno sent us home ! "

“And it was then with the results that the brands started to approach each other and that partnerships could be created. but it is true that before Vigo we had difficult times"

After a moment of relaxation over coffee, it's time for Javi to start his day. On the physical and technical training program.

During the video we can witness a typical training of Javi leal suggested by his physical trainer Pablo Cabrera and one thing is certain, the latter does not go out of his way with his protege.

Pablo Cabrera : “There was a change of mentality in Javier last year. He works much more, is much more concentrated. Following his injury he changed radically and today it shows on the track".

Javi leal " At the start with Pablo it was complicated because he asked a lot and in Cadiz I was not used to that (Laughs). But today everything is fine it helps me to direct me on the right path and I am delighted".

But enough talk, it's 09:10 a.m. and training must continue with padel. Direction the other side of the street to go to the second part of the club, at the M3 Padel Academy

“A future promise of padel"

"Here we call it dynamite because it is very explosive and very uncontrollable” confirms his trainer.

He continues with these words: I think he has a very big potential and he knows it because we have already discussed it together. In a very short time he is a player that we will see navigate the final stages. It's a matter of time for him to mature a bit more. He is very good because he defends and attacks well. He is doing very interesting things with the ball but he still has to control himself a bit and give what is expected of him in a match. In any case if I have to bet on a player, no doubt I bet on him. "

In turn Javi to express himself on what his coach has just said: ” It is true that I had a very different training method before. Currently I am taught to be more orderly inside and outside the track but also to suffer more and for all that I thank him deeply."

Once the training is over, it's time for the mental part. Still too often neglected, the latter is nevertheless fundamental for top athletes. The young Andalusian has understood this well and regularly goes to see a mental trainer specializing in sport, Sergio Parra.

“Psychology is a key element in the padel"

Some of you may wonder what the connection is between psychology and the track of padel.

Sergio Parra answers us: ” Psychology is a fundamental element, whether it is carried out in an office or in a club of padel. It is very important because it is on the track that he will put into practice everything that we are developing. It is essential that he knows how to face a punto de oro or a tie-break. Whether in a first or third set, the way to approach it will be totally different".

"It is fundamental to see how we extrapolate the session that we carry out in practice on the track. Players must set up their own routines using the tools learned during their workshops with me.".

"The players of padel must understand the importance of their state of mind when they enter the track. They must therefore focus on the first games of the first set. During the match it is essential that they keep control and mastery of what they are doing”.

Of course Saints wanted to know the opinion of the principal concerned.

“Psychology allows me to channel my energy. As said George, on the track I am very explosive. It can have good sides but sometimes it is the opposite and it is on these themes that we are working with Sergio so that it turns into a positive”.

This video is very interesting because it highlights the daily life of a young player of padel but it also allows you to know a little more about his history, the sacrifices made by his parents, etc.

You can find the video in Spanish below.